Featured in an article in my local newspaper, the Warrington Guardian, for our website being entered into a design competition hosted by Flatsome WooCommerce Theme. I’ve travelled all over the world, but I’ll never forget my roots!

Featured on Forbes in an Asian business article entitled ‘How This Myanmar Travel Company Went From $0 To $1.5M Revenue In A Year’, South East Asia Backpacker Magazine gets particular mention as one of the factors that helped FlyMya.com, a flight search engine website, to become massively successful.

So how did this happen? In February 2016, we wrote an article for them called ‘The Burmese Backpacker Boom’, telling people about the new flight search and how it can help people to travel in Myanmar who have limited time. From this article, we helped FlyMya.com grow their web traffic to 72,000 unique visitors. 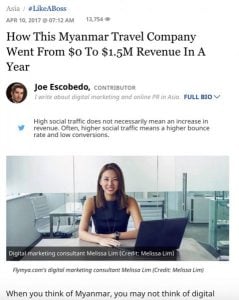 May 2017: Interview with Culture With Travel

Article published on Become Nomad called ‘Going Against the Grain. The Rewards and Challenges of Expat Life’ by Nikki Scott.

Interview with the Free and Easy Travel Blog: ‘Lessons from a Travel-preneur’. https://www.freeandeasytraveler.com/blog/lessons-from-a-travelpreneur/

August 2016: Interview with We Are From Latvia

Kaspar Misins from travel blog, We Are From Latvia, interviews Nikki Scott about being a ‘Backpacker Turned Travelling Entrepreneur’ and her new book ‘Backpacker Business’.

Anna from the travel blog, Global Gallivanting, interviews our founder, Nikki Scott on ‘How to start your own travel magazine!’ 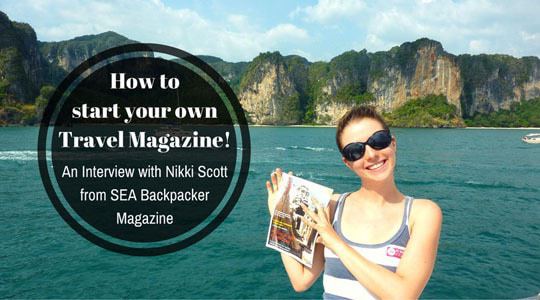 In this interview, founder of SEA Backpacker talks about her brand new book ‘Backpacker Business’, life as a travel writer and being an expat on the Full Moon Party island, Koh Phangan. Read full interview here.

Featured on the online travel magazine, Epicure & Culture (Food, Wine & Culture for the Ethical Traveller) as number 2 on the ‘Ten Best Blogs on Asia Travel’. 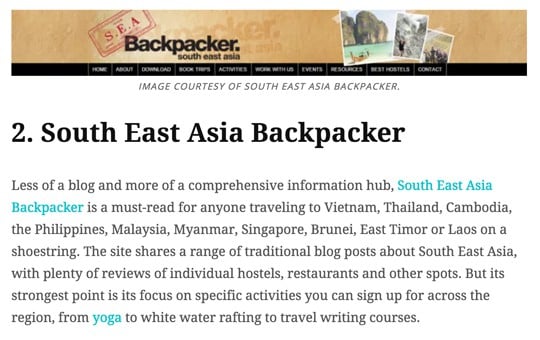 In depth interview with founder and editor of South East Asia Backpacker Magazine, Nikki Scott. Find out why she started the magazine, what challenges she has had to overcome and her hopes for the future! 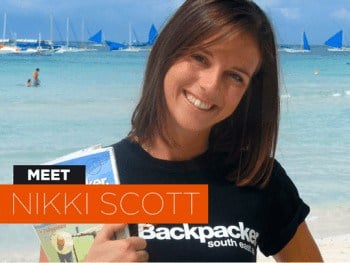 Published review in Ukraine International Airlines Magazine. South East Asia Backpacker Magazine editor, Nikki Scott, reveals all of the best places to explore on and off the beaten path in Cambodia, Laos, and Myanmar. 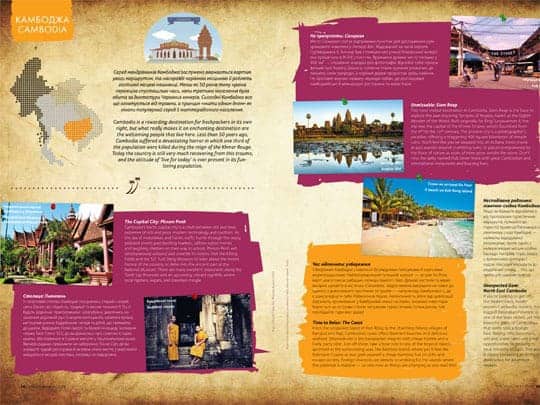 In this interview founder of the magazine, Nikki Scott, speaks to Kimberly Bryant about embracing life and tips she’s learnt from travelling. Read the full interview ‘3 Tips From a World Traveler for Embracing Everyday Life’.

We were on the radio! After a mad dash through the monsoon rains of Bangkok, Nikki made it safely back to her room to call into the station where she chatted with Kat Orman on BBC Radio Oxford. The topic was ‘backpacking in South East Asia’, as Richard Arthur promoted his new book “I Of the Sun” Nikki made a special guest appearance to share her backpacking knowledge!

Following a travel conference in Bangkok, we were excited to be interviewed by Thailand’s National Newspaper, the Bangkok Post, about the future of backpacking! From flashpackers, to career breakers and digital nomads – South East Asia has it all! 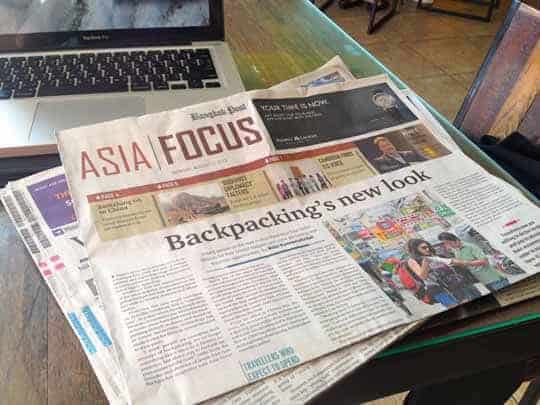 It’s pretty exciting when you are asked to quote on a specialist topic by a magazine. It’s even more exciting when that magazine is perhaps the most famous magazine in the world – TIME MAGAZINE.

With our noses to the ground in South East Asia, birthplace of the backpacking, we were asked to comment comment on the recent news about the potential demise of the Lonely Planet Guidebook. #LPMemories! 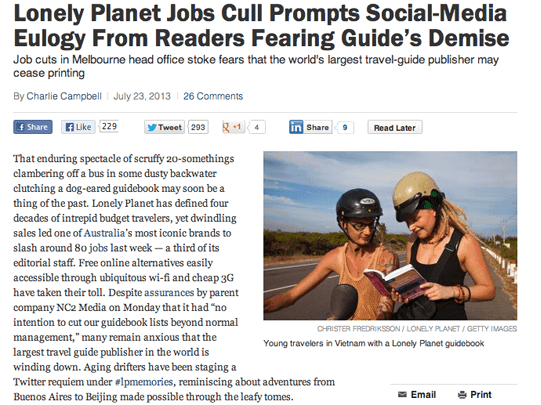 Nikki Scott spills the details about how S.E.A. Backpacker got started and proves that anyone has the ability to follow their traveling dreams…

Founder of SEA Backpacker, Nikki Scott was interviewed By Ivy Chee from PATA – about the changing trends in youth travel to the Asia Pacific region. From digital nomads and flashpackers to young entrepreneurs finding opportunities for business in South East Asia, she explains why the diversity of the region is so attractive to young travellers.

Speaking to an conference full of 5* hotel owners and high-end tourism industry professionals at the Sofitel Bangkok, we wondered why organiser Martin Kelly, from Travel Trends, had invited us? Would this audience be interested in backpackers and their influence on the travel industry as a whole? They certainly were!

More info about No Vacancy here.

A new annual event, Digital Innovation Asia focuses on how technology can improve travel, looking specifically at new trends and developments in the industry. We were invited to share our observations about the increasing number of Chinese backpackers at their China Boot Camp Day!

When’s she’s not busy putting together the next issue of S.E.A. Backpacker, Nikki, the editor and founder of  S.E.A Backpacker Magazine, spends her time sharing her secrets about how she started the magazine…

The S.E.A Backpacker girls are quizzed once again! On the 1st of January this year, Pamela McNaughton, author of Savoire Faire Abroad, formerly Spunky Girl Monologues, quizzed Deputy Editor Karen Farini and Creative Director Laura Davies on their love for travel and what keeps them on them road…

Although we confess to not being entirely sure what it says… This month S.E.A Backpacker Magazine is featured in the September 2012 issue of TRAVEL+ Magazine, China.

Laura was interviewed recently by travel addict and blogger, Neil Barnes, on his website backpacksandbunkbeds.co.uk – So what did she have to say? Read Full Interview with Laura Davies Here 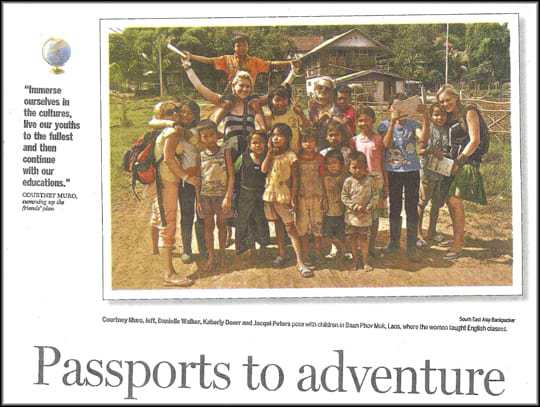 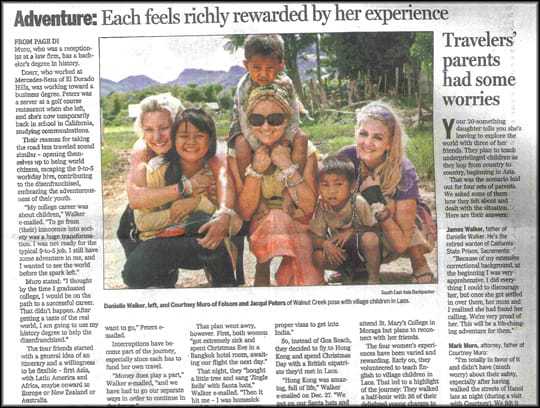 Nikki Scott, the creator of South East Asia Backpacker appeared in Company Magazine, UK (now owned by COSMOPOLITAN) in an article called “See ya Desk!” The feature was about young people who had left the UK to start a new life or a business overseas. 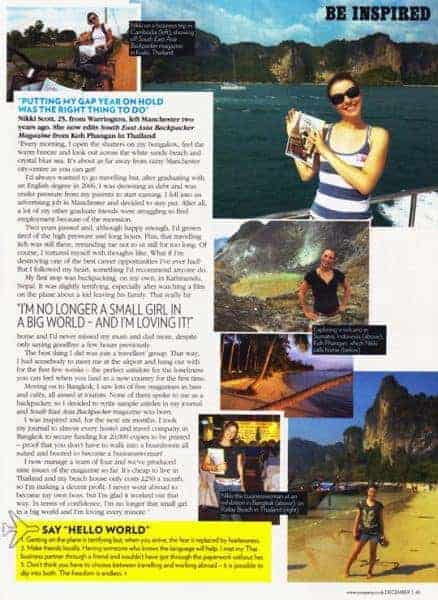