South Korea is a major destination for English Teachers in Asia, mainly due to the high wages that can be achieved by anyone with a University degree and a TEFL Certificate. If you’re thinking of living here or simply fancy a visit, Melissa Lang’s article will give you the lowdown on this small but prolific country.

South Korea has been slowly climbing its way toward becoming a tourism magnet since Korea and Japan co-hosted the World Cup in 2002, but as far as I’m concerned, the magnetic waves aren’t travelling quickly enough. This tiny peninsular continent is affordable, interesting, and has some of the most underrated cuisine on earth!

I was fortunate enough to have been given the opportunity to live there for one year and immerse myself in the Korean daily life. I’m here to tell you that South Korea is so much more than “Gangnam Style” and being unfairly associated with its unruly brother North Korea. It is a vibrant country with its own exclusive values and customs.

1. The Expat Culture in South Korea is Thriving!

South Korea is still relatively new to foreign English Teachers, in comparison to other East Asian countries such as China or Japan. However, the foreigner expat population is growing at an impressive speed and you can easily find now in almost every major city a number of popular foreigner-specific bars and restaurants.

And why is expat culture thriving you may ask? English Teachers in South Korea working at private language centres earn on average $2000 USD a month, with accommodation included, as well as yearly flights home. It’s one of the most lucrative places to teach English in the whole of Asia.

Check out our city guide to Seoul here.

2. South Koreans Don’t Care About The Danger Up North!

Whenever I tell people I taught in Korea, many people’s faces quickly change to resemble a dishevelled monkey’s in horror immediately asking me, “It’s not North Korea, is it?! This is where I have to jump into reassurance mode and correct them that no I did not teach in North Korea because I came back in one piece.

I’m still stunned to think that there is this underlying stigma associated with South Korea because of its proximal association with its totalitarian neighbour.

While I lived in South Korea I immediately realised how unaffected and unconcerned the people are of North Korea’s presence. I am writing this from a first-hand perspective that none of the people I have encountered have ever felt in danger. You can now blame Western media for hyping North Korea’s current danger as a neighbour to unnecessary proportions!

3. South Korea is a Very Safe Country To Travel and Live

South Korean’s lack of fear leads to another thing you would discover about South Korea in that it is very safe. I have noticed that they are very trustworthy of strangers. Any given day you would easily walk by countless motorbikes just running with the key in while the owner runs into the convenience store quickly.

Shoes, purses, and food would line up the streets without a person monitoring for possible shoplifters but not a soul would attempt to steal. This kind of felt security just shows you how trusting the Korean people are and it’s refreshing.

I experienced exactly just how trusting and concerned they are of others and especially of foreigners when I was on riding the bus. I was standing with my big purse and an older lady sitting next to me actually took it. I was immediately taken back by it and was ready to wrangle my purse out of her clutched hands when it was my stop, it would be no contest.

When it came time for me to get off the lady gave me the biggest smile and gave my bag right back to me. We couldn’t exchange any words but I knew right then that she was just simply looking out for me and wanted to relieve me of my baggage.  Koreans are gutsy with conviction, and will do what they think is right for you, no questions asked.

You have not experienced the full extent of South Korean culture until you have stepped foot into a Korean bathhouse. Here women, men and children strip off and soak in various heated baths filled to the brim with natural spring water.

It is in the bathhouse where you can be completely uninhibited and can just relax. Everyone else is in the same boat naked wise, or should I say bath wise. I fell in love with the concept of the bathhouse in Korea. Just a communal sanctuary, an oasis where you leave your self-conscious thoughts at the door and have a moment to reflect and focus on yourself.

Going to the bathhouse was also a social event as well. Here women would catch up on their gossip and wash each other in such a nonchalant way, completely unsuspecting that it would strike unorthodox from a Western perspective.

Want to sit in a sauna before you plunge yourself into a cold water bath? You can do that as well. I have fully embraced the bathhouse and would highly suggest any visitors try this truly authentic experience. You might even come back for more.

5. Koreans Know How to Eat Meat!

There are many things that the Koreans do right, and the way they eat meat is definitely on that list. Korean barbeque or “gogigui” is such an efficient way to eat meat. On any street, you can find at least one to walk by. You essentially sit at a table with a grill placed at the centre of the table. Your next step is to check off on the menu what meat you would like to cook at your table. They present you with an array of raw marinated meats and then the cooking starts.

My first time at a Korean barbeque was a magical experience. The rising smells from the roasting meat are enough to make you salivate. Some places are even all you can eat meat Korean barbeques. You pick all the different kinds of raw meat you want and then cook to your stomach’s desire. There is also a side dish bar where you get to choose from an assortment of sauces and vegetables to cook your meat with. You will definitely become addicted to this do it yourself style.

My first time at a Korean barbeque was a magical experience. The rising smells from the roasting meat are enough to make you salivate. Some places are even all you can eat meat Korean barbeques. You pick all the different kinds of raw meat you want and then cook to your stomach’s desire. There is also a side dish bar where you get to choose from an assortment of sauces and vegetables to cook your meat with. You will definitely become addicted to this do it yourself restaurant style.

South Korea has a myriad of authentic sights, smells, and forms of relaxation that is a must-see for any Asian backpacker. Forget the sensationalised North Korean threat that the media tries to propagate. Immerse yourself in the Korean experience. It is unique and welcoming to all who are open-minded. You won’t be disappointed. 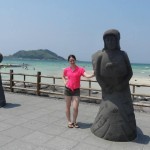 Owner at Slice of Kimchi

Melissa Lang is a free spirit with a passion chronicling her experiences on the other side of the world. Read more of her observations of South Korean life on her blog, Slice of Kimchi. Are you interested in writing for us?