Skip to content
Bangkok! It’s the gateway to Asia – often the first place we touch down when we arrive, and most likely, the last before we go back home again. But how well do we know it, really? It’s an absolutely sprawling metropolis, after all, with the kind of 24-hour nightlife where everything’s on offer, from your standard friendly Irish Bar to…well, you know. Everything else. It’s surprising, then, that a whole load of us never usually venture further than the Khao San Road in Banglamphu (although this can be understandable, we suppose – there’s the issue of jet-lag for a start, plus the sudden shock to the system brought on by one whisky bucket too many). 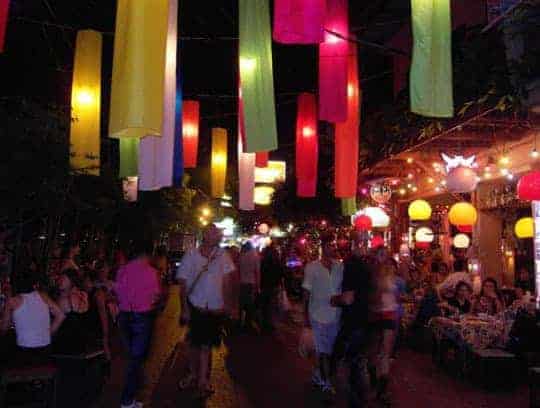 Checking out Khao San is almost a right of passage, but what lies beyond?

And yeah, we’ve all been there. Gullivers, Mulligans, The Reggae Bar, the gutter… Of course, there are some gems around and about the area, including Pranakorn Bar on 58/2 Soi Damnoen KlangTai –  a gallery-rooftop-bar with seductively low lighting and views of the Golden Mount… Still, if you don’t mind the shortest of tuk-tuk drives, there so much more to experience! And no, we’re not just talking Patpong to watch women shoot ping pong balls out of their nether regions (on that note: don’t sit at the bar unless you’re prepared to join in with a bat). Perhaps you’re curious and want to see it once – and you should indulge in the obligatory staggering round the KSR getting tattoo-ed up and buying fake degree certificates and those noisy wooden frogs… Still, if your stay in Bangkok is more than just a fleeting one, and you are piqued by that desire to explore a little further…then please, my dears, do read on! We compiled these hotspots for you… Hankering after are some wicked tunes and a sweet vibe? Then look no further than Glow on Sukhumvit, Soi 23. It’s got a brilliant atmosphere, a seriously good soundsystem, plus a seemingly endless selection of top-notch drinks to help rid you of those inhibitions (in case neither those badass basslines nor the fact you’re in one of the most exciting cities in the world are enough!?)

Each night of the week, there’s a different sound (and different DJs) – so if you’re particular about your genres, then it’s worth checking to see what’s going on first. Many of the nights there are arranged or sponsored by Ubraido –an internet-based radio station in Bangkok that promotes the best of underground music, so whatever one you end up going to – be it hip-hop, techno, house or drum n bass, expect some seriously boshing underground beats, a wickedly deviant atmosphere and a load of happy people who are there to party hard! 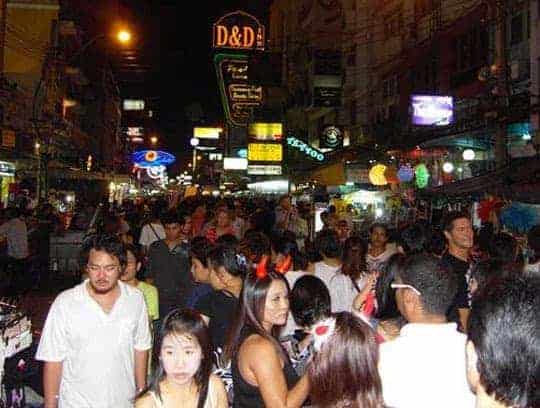 Get ready to party hard, Bangkok’s got a pretty raucous beat pulsing through it’s core!

Also, look out for any nights arranged by Zudrungma Records. According to Owen Haywood (of Fluid Bar, Vang Vieng fame!): “the  owner, DJ Maft Sai, puts on tremendous parties with a completely different feel to anything I’ve ever been to before…” (why do I get the feeling this is saying a lot?!)… “Paradise Bangkok is the name of the event; they throw monthly events at different bars/clubs in Bangkok and have also done parties in Europe. We’re talking a truly mind-blowing mix of molam and luk thung (traditional thai music), funk, reggae and everything in between. They take their own soundsystem wherever they go, and believe me, it provides some heavy vibrations to keep your ears in tune! Oh, and the crowd is really eclectic, too!” A man with more tips than a box of PGs (oh, tea, how I miss thee), Owen also tells us that on Soi 11 are two new clubs that offer the same underground vibe: Level, and Bash– so keep your eyes and ears open for those, because they sound like good’uns! Finally, he gives Q Bar (also in the same area – Sukhumvit Soi 11 – the thumbs-up for a good bassline-heavy club night out, as well as the very decadent Bed Supperclub (yes, there’s one in Bangkok too – and yes, it’s lined with wall-to-wall beds!) Like most venues, there are different promotions on every night there (we particularly like the sound of Prosecco Sundays), but if it’s quality electronic music you’re after, then go on a Thursday, and join the (chic and dressed-up) crowd getting properly buzzed up courtesy of the various international DJs who take on the guest spots every week. Our last suggestion for a good clubnight is down the road in Thonglor (Soi 10), where you’ll find arty hipster fave Demo in a concrete Berlin-style warehouse. Far more reminiscent of the clubscene back in Europe (where underground parties in venues with glitterballs, lamps and carpets are generally frowned upon), here you can treat yourself to an earful of Bangkok’s latest, most progressive (and experimental) dance music (usually house and minimal techno, for the aficionados amongst you). Of course, this is all assuming you’re actually hardcore techno lover. Perhaps what you really like is a little bit of jazz – in which case, haul yourself over to Saxaphone on 3/8 Phayathai Road Victory Monument – a great jazz and blues pub that’s been going since 1987, and is open every day from 6pm till 2am (nb – Saturday’s particularly good for live bands). There’s also Tuba on 34 Room 11-12A Soi Ekkamai 21, Sukhumvit 63 – which also doubles up as an antique shop during the day.

Pool parties: well, there are a fair few dotted round the city, including Aloft Bangkok on Sukhumvit 11 and AmBar on Sukhumvit 15. (In case it had escaped your attention, Sukhumvit is pretty well renowned for its plethora of drinking, dining and clubbing venues – though most of them do tend to attract more of a tourist/expat crowd – in particular Cheap Charlie’s, that our Ed Nikki reckons is DEFINITELY worth a visit.  Described as ‘matey, beery and grungy’, this is the dive bar that apparently puts the ‘X in expat’. Ooer – ok, then!) Talking of X – we really love the sound of the Telephone Pub, Restaurant and Karaoke, in the gay district of Silom Soi 4. It’s hardly the latest new trend on the soi – it’s been there for 22 years, but hell does it sound like a laugh! Yes, there are telephones! Yes, you can call up people on the next table! Yes, it’s welcoming to all – regardless of your sexual orientation – and yes, we’re going on our next visit! Finally, though – we must give a mention to all the seriously cool places in town: including skyscrapers, and the ones that stock the best wines. And on the subject of the latter – well, there used to be a distinct lack of places in this city dedicated solely to the grape, but this is now changing rapidly! Apparently, ten new wine bars opened in Bangkok in the last two months alone…our pick of the moment? Try diVino on Sukhumvit 55. Founded last year, it’s got over 300 wines on the list – and if you’re not a connoisseur, even better…you can ask owner Roberto to recommend you something based on the flavours you like the best. Typical of Italy, you even get complimentary aperitivos with every glass you buy. Bellisimo! With regards to the rooftops – well, of course we’re not discounting the famous Skybar (think the Hangover II),  and certainly not the Vertigo and Moonbar at the Banyan Tree Hotel  (we think the champagne and jazz on the 61st floor here is more than good enough bait) – however, the three that get our votes this time round are Mojo (in the Thonglor area: 10-19 Sukhumvit Soi 33), The Nest (above Le Fenix Hotel in Sukhumvit Soi 11), and the Long Table on Sukhumvit (Asok) (all with great views, great cocktails, great food – and definitely in the case of the Long Table, house beats all night long… So there you have it. Or, rather you don’t. Frustratingly, this list barely skims the surface of what’s on offer in one of Asia’a most happening capitals – but we’ve run out of page space, and anyway, aren’t you thirsty yet? More importantly, are you THERE? If so, get yourself ready and get the hell out… The city awaits. [molongui_author_box]

14 thoughts on “Out and About, Beyond Khao San Road in Bangkok!”