An Introduction to Backpacking in Laos

From the 8th century onwards, people migrated into Laos from Southern China. In the 14th Century, the first state of Laos was founded, known as the Lan Xang Kingdom which ruled until 1713.

With unspoilt natural landscapes with tiny villages dotted amidst the mountains, many parts of Laos offer a glimpse into a Southeast Asia that is rapidly changing in neighbouring Thailand and Vietnam. A captivating destination for backpackers, if there’s one way to describe Laos, it’s laid back – and then some! 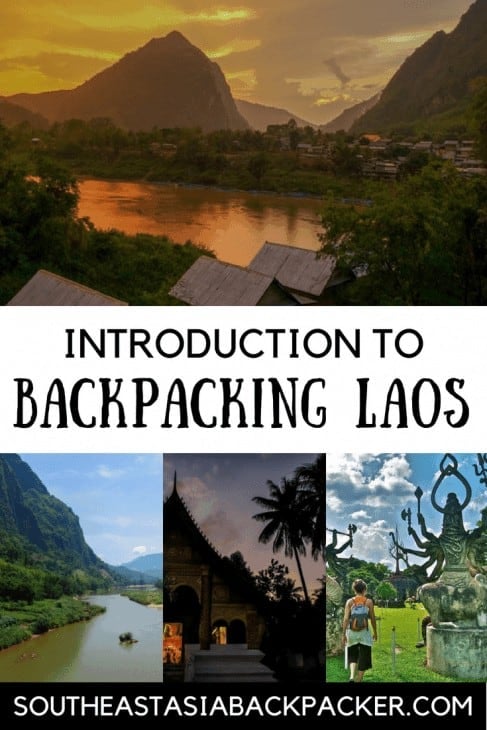 Check out our travel guides to the best places to visit in Laos below! Scroll further down and you’ll find an overview of each region.

When is the best time to travel to Laos?

The wet season in Laos is between May and October and the dry season between November and April, considered the best time to visit Laos. Temperatures during this time are the most comfortable but can be quite cold in mountainous areas. The hottest time of the year is between March and May, with temperatures reaching a scorching 38 degrees.

30-Day Visa: Most nationalities can obtain a visa for Laos at international airports and border crossings. The cost is usually US$30 for 30 days. At the Thailand/Laos border if you pay in Thai baht the fee will be more expensive. You will need 2 passport photos and your passport must be valid for at least 6 months upon entering.

Penalty for late departure: US$10 /day. Long overstays can lead to arrest and imprisonment.

Although buying a local SIM card can help travellers to stay connected in Laos, coverage is not always reliable and internet speeds can be poor. Generally, many people travel with a couple of local SIMs and then swap them, depending on which carrier provides the best coverage in a certain area. Unitel is a good option for backpackers but there are alternatives. Learn more about buying a SIM card in Laos.

Take a wander through the sleepy streets of the French-infused capital, Vientiane and you’ll see what we mean about the laid-back vibe. As the mighty Mekong slowly flows by, drivers sleep in hammocks in the back of their tuk-tuks, the smell of freshly baked bread drifts from quaint bakeries and locals go about their daily work with a slow pace of life – always time for a smile. It’s a world away from Thailand’s hectic capital.

Did you know? Most of the towns and villages in Laos are located near rivers and streams, whose tributaries eventually flow into the mighty Mekong. It is estimated that 80% of the population of Laos live near the water, as it provides a reliable life source for their main existence through subsistence farming.

Pha That Luang is a dazzling golden stupa situated on the East side of Laos’ capital Vientiane. It is a highly important symbol of Buddhism and the national monument of Laos. legend has it that this was once the site of an Indic temple dating back to the 3rd century that housed a piece of Lord Buddha’s breastbone.

From the capital, take a short trip to Buddha Park (Xieng Khuan) in Laos is an unusual sculpture site located just outside of Vientiane that is home to over 200 concrete, slightly bizarre Hindu and Buddhist statues. The park was built in 1958 by a Priest-Shaman named Luang Pu Bunleua Sulilat and is visited by many tourists today.

Heading North you’ll find the picturesque and popular town of Luang Prabang. With its twinkling temples, sparkling streets and colourful markets; it’s a wonderful place to spend a few relaxed days, fill up on some delicious homemade baguettes, banana and chocolate pancakes and randomly spend an evening at the bowling alley! (Ask the tuk-tuk drivers where to go after the 11 pm drinking curfew!)

Luang Prabang in Laos was made a UNESCO world heritage site in 1995. It is the ancient capital of the Lan Xang kingdom, which unified the country of Laos in the 14th century.

Did you know? Sticky rice or “Khao Neow” is a staple food in Laos and is generally eaten with every meal. In villages and towns, you may see sticky rice lined on trays drying under the sun. For sticky rice with a twist, locals like to barbeque the rice with butter and egg to eat as a tasty and crunchy snack.

Luang Prabang is the gateway to the wild north and the amazing great outdoors of Laos. Trekking in the Northern provinces from Nong Khiaw into the stunning mountain and jungle scenery, stopping off at the hill tribe villages along the way is a highlight of many a backpacking trip. Bumpy roads, friendly locals and mountain wilderness in this part of Laos is the big draw for intrepid travellers.

The secret caves of Vieng Xai in Northern Laos are a network of caverns that were used by military planners during the Vietnamese war. The planners ran much of the war from those bunkers as it was close to the border and the Ho Chi Minh trail! Recently, the caves were officially opened to tourists. Vieng Xai means ‘City of Victory.’

And then there’s the infamous Vang Vieng! The once sleepy riverside town that up until recently had gained a notorious reputation as one of the best places to party on the South East Asian circuit! Now the partying has been banned… is there still any point visiting Vang Vieng? Errr. YES! And we think it’s even better now… a naturally beautiful place where limestone karsts jut from rice-fields and rivers and just five minutes away from the main drag, village life goes on as it has done for hundreds of years. There’s rock climbing, rafting, kayaking and other adventure pursuits available.

Read our article about the death of Tubing here.

Phonsavan (The Plain of Jars)

The “Plain of Jars” in Laos is an area where hundreds of stone jars, big enough to hold a person are scattered across the landscape. The largest jar weighs over six tonnes. Experts predict they are approximately 2,000 years old but the purpose of them, how they got there in the first place and who made them remains a mystery. Some experts believe they were used as burial chambers.

Read our guide to Phonsavan here.

Did you know? During the Vietnamese War, between 1964 and 1973 there were over 260 million bombs dropped on Laos by the US. Today many unexploded bombs (UXO’s) remain in countryside areas which injure thousands of locals every year.

And when you’ve had your fill of adventure and partying and you just want to chill the heck out; head south to Four Thousand Islands, (Si Phan Don) where the vibe couldn’t get more chilled if it tried! While away pleasant afternoons reading and lazing in a hammock as you spot Irrawaddy dolphins from your bungalow porch. If you’re up for a mini adventure, hire a bicycle in Don Det and cycle over the bridge to Don Khong where you’ll find Southeast Asia’s largest waterfall!

Did you know? Khone Phapheng Waterfall on the Mekong River in Southern Laos, also know as the ‘Niagara of the East,’ is the largest waterfall in South East Asia.  At a height of 21 metres, stretching over six miles, an average 11,000 cubic meters fall from the cataract each second.