The Thais have a saying – “Mai phet, mai arroy” – “If it isn’t spicy, it isn’t tasty!” And boy oh boy does that make sense when you’ve had your first taste of Thai chili.

I learned this phrase early on, during my education in Thailand’s culinary arts. After tasting one of my first dishes, the disappointed Thai chef shook his head and uttered the words. As an enthusiastic amateur, keen to replicate my teacher’s creations, his words cut deep.

Straight away it became clear that the quantity of Thai chili used in these recipes could be at least twice what a comparable Western recipe would recommend, i.e. enough to stun a grizzly bear! And, although I wanted to share my new gastronomic delights with friends and family, I was afraid that if I were to feed them a full-strength ‘Thai-style’ dish, I’d cause cardiac arrest among my diners and be threatened with culinary litigation!

Since my first Thai cooking lesson, I’ve adjusted and readjusted recipes and constantly battled with that one little ingredient, the most colorful, powerful, and essential of them all! The ubiquitous Thai chili pepper.

What are Thai Chili Peppers?

You could be forgiven for falling into the age-old trap of believing that Thai chili refers to a single type of pepper from Thailand. However, Thai chili actually comprises a whole variety of chili peppers which are generally small and carry a lot of heat.

To find out how hot Thai chilis are, we must first understand the scale on which they are measured. The science of measuring the heat of chilis was developed by an American researcher, Wilbur Scoville in 1912.

How Hot are Thai Peppers?

This Scoville scale measures the common sweet or bell pepper at zero Scoville units since it contains no capsaicin, while the commonly found Thai pepper known locally as prik kee noo logs in at 80,000 to 100,000 Scoville units.

How to Stop Chili Burn:

If you’ve bitten off more than you can chew on the chili front, stay calm and try not to panic. These tips should extinguish the chili flame.

As the capsaicin is not water-soluble, mouthfuls of water or beer tend to relocate the chili spice to other areas of the mouth, providing only temporary relief.

It is estimated that there are at least 79 different types of Thai pepper which have all evolved from three particular species in the country. Of these, at least a dozen varieties of chili are commonly used in Thai cooking. Here are a few of the most common.

Note: Although we have endeavoured to include the Scoville heat units for each kind of Thai chili listed, there isn’t reliable data for every type.

‘Bird’s eye chili’ also known as ‘mouse dropping chili’ is referred to as prik kee noo in Thai. These chilis are green, orange or red, rounded, and are about two inches long. (A Thai chef in Koh Lanta once told me that the orange bird’s eye chilis are the spiciest!) Bird’s eye chilis are used in their raw form in stir-fry dishes, sauces, soups (like popular Southeast Asian street food, Tom Yum) and to make pounded relishes. Sometimes the whole chili is deep-fried and used as a colorful topping for various dishes. When bird’s eye chili is dried, it is often ground down into chili powder.

The other most common Thai chili is the ‘sky pointing chili’’ or prik chee faa. These peppers get their name from the upright way in which they grow. They are around three to four inches long and can be either green or red. Prik chee faa is often dried, deseeded, and softened in water, before being pounded into the many variations of chili pastes called kaeng.

Known locally as prik yuak, the banana-stalk chili is about four to seven inches long. It is not spicy like some of the other famous Thai peppers and instead has a sweet taste. It is a green chili and its light color does not develop or change as it ripens.  It is often seen pickled in vinegar as a condiment for noodle soups.

Another very hot Thai pepper is Prik Jinda which is generally longer and milder than Bird’s Eye chili. It is used in many Thai dishes and although milder than some others from Thailand, it will still provide an adequate kick for most people!

Generally found in the southern district of Ban Chang, this Thai pepper is long with smooth skin. It can be either red or green and whilst it’s mainly known for its spiciness, the fact that it doesn’t contain many seeds makes it a particularly popular choice for curries and chilli pastes.

Aside from the famous Bird’s eye chili, Prik Kaleang is one of the spiciest peppers used in Thai cooking. These chili peppers change from light green, going yellow and orange, before finally turning red. They often make an appearance in curries, traditionally served in the north of Thailand. The heat tends to build gradually so be aware of this if you do decide to try one!

Mun in Thai means oily and refers to the glossy skin of these dark green and red peppers. They are ideal for pickling and usually turn up in the condiments provided in Thai restaurants.

These slender orange chili peppers are used less frequently than the red and green varieties but still regularly crop up in salad dishes. They are available from late summer into autumn and are classed as moderately spicy.

The History of Thai Chili

Although Thai chili is practically an icon in Asian cooking, you may be surprised to discover that the chili is not native to Thailand itself and in fact, originates from Central and South America. A precise history of the arrival of the chili in Thailand has not been fully documented, but it was thought to have arrived in the 15th century.

Whether Portuguese traders, Indian merchants, or Spanish explorers brought it is a matter of debate, but since the arrival of chili, it has been adopted as a cornerstone of the cuisine. Prior to the blessed introduction of chili, local chefs used peppercorns and roots like garlic, ginger, and galangal to give food a kick.

We know that during the Ayutthaya period, many Thai dishes did not include chili. However, 100 years later, during the reign of King Rama II,  chili appeared in a piece of writing by Sunthorn Phu, a famous poet. He mentioned both salt and chili as ingredients for flavoring venison. This is one of the earliest references to using chili for seasoning within the country.

Why is Thai Food so Spicy?

This is one of life’s great unanswered questions. However, based on what we know about the taste and availability of chili, we can make educated guesses. These are my theories:

Chilis are inexpensive to purchase and easy to grow in Thailand’s tropical climate. Thailand’s birds like to feast on chilis and spread the seeds in their droppings, so the chili plant grows wild throughout the country.

Fun fact: Birds do not have the same pain receptors as humans so they do not feel the chili heat!

Are Thai Chili Peppers Good for You?

According to the British Medical Journal, a preliminary link has been found between eating hot chili peppers and subsequent health benefits. Here are some of the reasons why it is believed that chili might be beneficial to your health.

Chilis are a good source of vitamins B, C, and pro-vitamin A, as well as magnesium and potassium. In fact, chilis have more than twice the amount of vitamin C of an orange!

Chilis have an enzyme that helps the gastro-intestinal tract kill parasites in food. Capsaicin is the active component in chilis that gives the fruit its spicy flare, triggers endorphins in the body, and accelerates the body’s metabolism with healthy effects for efficient digestion.

The chili fruit can help induce a sweat to cool off the body (not that I’ve ever needed a catalyst to get a sweat going in Thailand’s tropical climate, but every little bit helps!)

The Legend of Thai Chili and Increased Strength

There’s a pearl of certain folk wisdom in Thailand that believes that eating chilis gives you strength. Questioning Thai chefs and vendors about this belief, I was always met with a statement of agreement bordering on religious conviction.

On one occasion, I discussed the matter with a Thai pharmacist, who demonstrated the scientific basis of his conviction by showing me a bottle of carminative syrup, taken by Thais to cure stomach ailments, gas, and colic. He noted it contained an extract of chili (intended to aid digestion) to demonstrate his point. Guess that settles that then!

What are your favourite spicy Thai dishes? Let us know in our Facebook community!

In 2004, Chef Tummy leapt into a cooking adventure in Thailand. He studied the Thai language in Chiang Mai before embarking on a 6,002-mile motorcycle trip around the country to study traditional Thai cooking from the real experts – the Thai ‘Aunties’, who make the best regional Thai food. He eats an inordinate amount of durian. 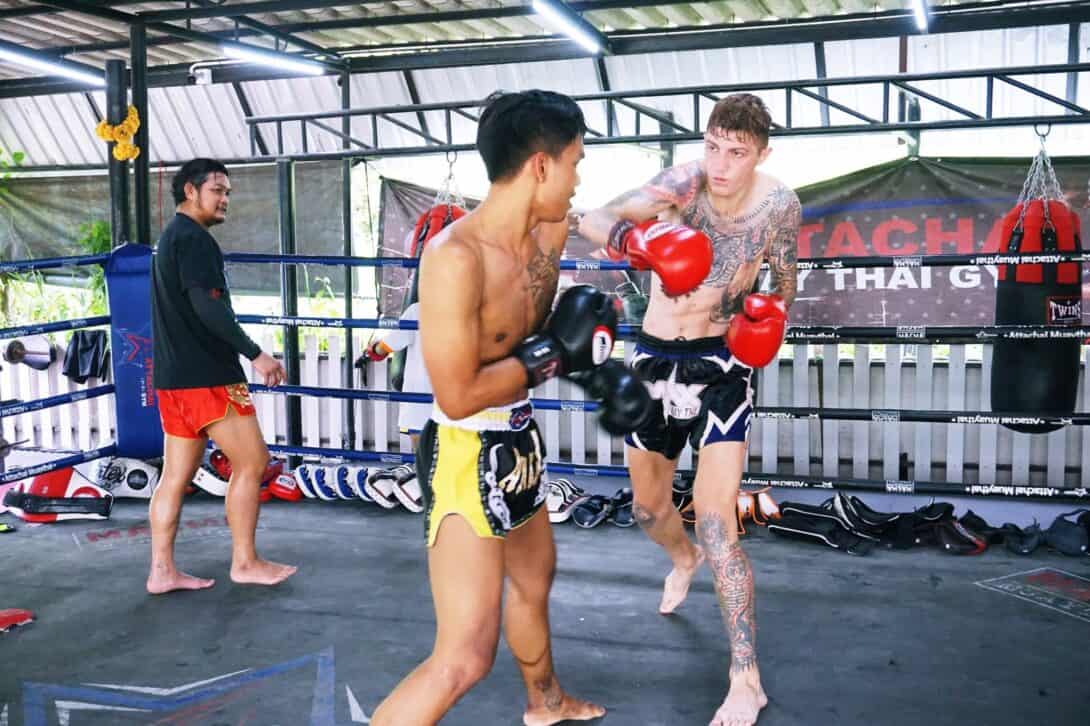