Coming back home from a long stint backpacking can be very strange indeed. At times you feel like an alien in your own country! (Cue Sting). You’ve forgotten so much about what life back home is like and picked up many weird habits while you’ve been away. Are you still the same person that you once were? Here are 10 symptoms of extreme reverse culture shock…

Have YOU Experienced 10 Symptoms of Reverse Culture Shock?

1. You get nervous when people serve you in shops and restaurants as they can speak the SAME LANGUAGE as you! They speak so fast, they are so polite, you can ask them anything you want! It’s almost too much to handle. 2. You make SMALL TALK with anyone, everywhere. On the tube, in a café, walking down the street. So what are you up to tonight? How long have you been in this city? Where are you from? Life outside the hostel isn’t quite as friendly

3. You’ve developed a form of Tourette Syndrome when buying train tickets and snacks, “F*** OFF, it’s HOW MUCH?” No matter how much you try to brace yourself, you can’t help but be shocked at the cost every time, expletives shooting from your mouth.

4. You are walking around bowing at people in a Thai style ‘wai’, saying gracias to some people and performing the Indian head shake at others – you’re a CULTURAL MESS and you’re getting funny looks. It’s embarrassing.

5. You’ve forgotten all the little silly etiquettes and SOCIAL NORMS of pretentious society. Waiting for everyone to be served their food before you start to eat, putting your napkin on your knee, queuing for toilets and lifts… not putting your toilet paper in a bin at the side of the toilet at someone’s house. Stop being so rude and uncouth! 6. You suddenly have SO MUCH MORE TIME in your day. Things just seem to go according to plan, all the time… That half an hour bus journey you planned, well it took… half an hour! No break down, accident or delay. Bus journeys get you from A to B. No story to tell.

7. You become gushy and overly emotional about the things other people find normal. Hot showers, soft pillows, real cups of tea, real chocolate… You’re smiling so much at your bagel right now that the woman who served you thinks you are simple. Every missed experience is relished like a precious rediscovery. You will NEVER TAKE CHEESE FOR GRANTED again!

8. You realize you may need to BRUSH UP up a bit. You look like shit. People around here smell nice, they have clean hair and no three-week-old dirt underneath their fingernails. They’re looking at you like you just crawled out of a backpack… erm, ‘cos you just did.

9. You wonder why no one is pestering you. “Tuk-tuk, taxi, massage, cambio, my friend…” it all seems well, KIND OF LONELY and quiet without the constant chatter. You miss it. You always felt so popular and desirable.

10. You resist the urge to tell everyone… “Do you think I’m acting weird?” Do you? Well, it’s actually because I’ve just got off a flight from Bangkok… This one time when we were on a bus in northern Laos…” Your adventures mean so much to you, but guess what? When you get home, you will slowly realize – NO ONE CARES! Life goes on as normal. There’s a new character in that reality TV show, Man U just bought a new player, it’s Steve’s stag do next week, whatever you think you may have done that is more adventurous and better than everyone else, if other people can’t relate to it – they won’t want to know.

ONE FINAL TIP: Resist the temptation to try to fit ‘sticky rice’ into every conversation…

Did this article make you chuckle? 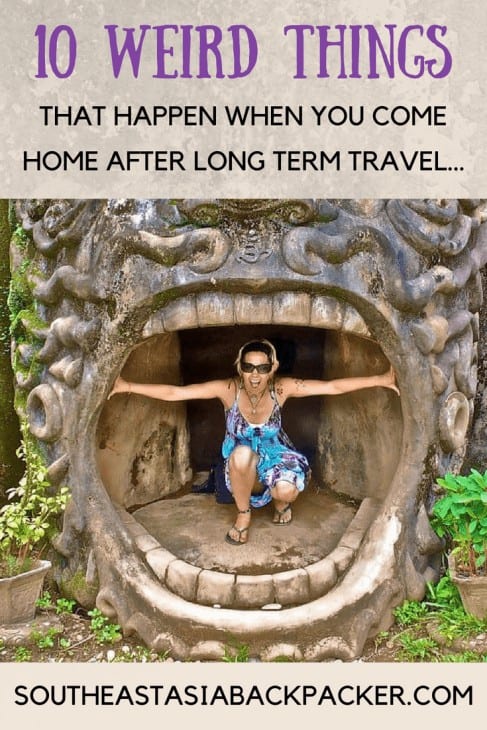