Brunei is a small country and its only airport, Brunei International Airport, is found less than 15 minutes from downtown Bandar Seri Begawan, the capital.

Despite its relative size on the island of Borneo where most of the land belongs to Malaysia and Indonesia, Brunei is regarded as one the richest countries in the world thanks to its vast oil fields.

In fact, the Brunei Dollar is on a par with the competitive and stable Singapore Dollar with a conversion of 1:1. Both currencies are accepted in either country.

Brunei is a safe country and you’ll be pleased to know that the recently enforced ‘Shariah Law’ is no cause for concern.

As well as women fully covered in the burka, it is common to see non-Muslim women carelessly strutting around in short shorts and locals of different sexual orientations expressing themselves openly.

As with all Muslim countries, Friday is the day of worship and most establishments are closed on this day. Alcohol is illegal in the country.

Very few locals take public buses. Instead, they take water taxis. Both fares start at BND 1. As for hotels, there are very limited options in the city (and almost no budget accommodation).

SIM cards are helpful for travellers looking to stay connected although the internet speeds are often slow. The DST Tourist SIM seems to be the best option for backpackers. You can find out more about SIM cards in Brunei here.

Suggested Itinerary for 3 Days in Brunei 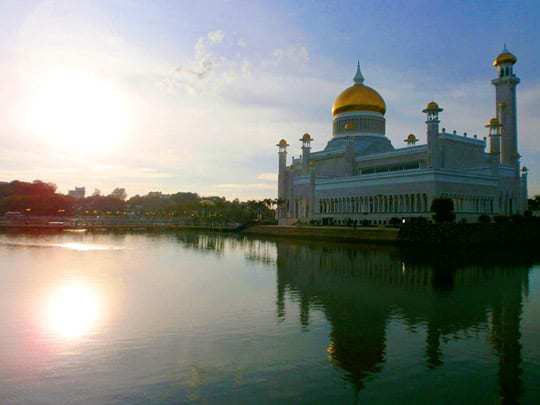 Here is a proposed itinerary to make the most of a few days’ stay. The best part is, most attractions can be reached on foot within a couple of minutes from each other.

Seriously, how often do you get to visit a tropical jungle with a waterfall conveniently located in the middle of the city?

Start the day off by testing your fitness levels at the family-friendly Tasek Lama Recreational Park. Here you can enjoy wild flora and fauna along many hiking trails and a great view of the city from the peak. Do bring a small towel for the humidity and do not show the macaques any of the snacks you brought to prevent them from being overly friendly.

Afterwards, you can proceed downtown to cool off inside the Royal Regalia Museum. The name is pretty self-explanatory: this museum contains keepsakes given by foreign dignitaries to the Sultan and other delicately preserved memorabilia of the Bruneian Royal Family.

The most noteworthy article is the majestic golden hand-carried carriage of the king, which is truly fit for no less than royalty. Unfortunately, photography is not allowed inside but you can totally make up for it at the next attraction… 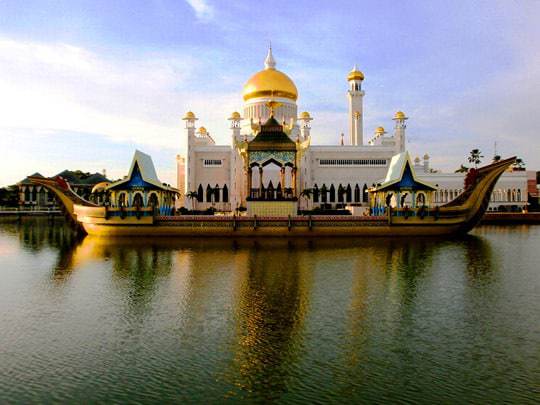 Probably one of the first icons you’ll notice in the city, you can’t miss its towering golden domes.

Constructed and named after the highly-revered 28th Sultan of Brunei, its exterior grounds are almost palatial; the distinctly-shaped windows are an elegant touch and the ivory-like marble gives off a peaceful, cleansing feeling.

The grandeur of the mosque against the sky with its reflection on the lake makes for a flawless photo!

Across from the mosque, you can enjoy a short break at the Yayasan Shopping Complex which comes with a supermarket, department store, shops and international fast food chains.

From here, a stone’s throw away is the Kampong Ayer, which isn’t just any water village. It is the largest in the world and has been inhabited for over a millennium. Getting to the village is the perfect chance to experience riding a speedy water taxi. Seeing them zip by from one end to another is quite a sight.

Despite being located above water, the village is a remarkable self-sustained community which has electricity, cable TV, telephones, internet and other conveniences of modern technology.

Schools, police and fire stations can also be found here. You can truly immerse yourself in the local culture by interacting with ordinary folk and seeing how they go about their daily lives.

After checking out the Culture and Tourism Gallery, you can take another water taxi (for BND 20 or less) to see the proboscis monkeys, found only in the Borneo region, in their natural mangrove swamp habitat.

Get Arty! The Arts and Handicrafts Center

Afterwards, you can opt to get off at the Arts and Handicrafts Center for some local jewellery, woven fabric and other souvenirs. For more exotic finds, walk over to Tamu Kianggeh, which is similar to other Southeast Asian wet markets.

This area is connected to the city by means of a bridge over a narrow brook where water taxis come to pick up and drop off passengers. This market is a great place to shop for unique fruits, medicinal herbs, dried fish and spices.

At this time, you can head back to the Omar Ali Saifuddien Mosque for equally stunning photos of it at sunset and at night, when it becomes brightly lit and reflects marvellously on the water. Specifically, the area across the lake enclosed by a fence offers the best views of the entire mosque complex.

On day two, you can explore the farther corners of the city. From afar, you can see the four towering minarets (pillars) of the Jame’ Asr Sultan Hassanal Bolkiah, the largest mosque in Brunei.

Unlike the previous mosque, this one was built to honour the reigning Sultan. Nonetheless, it also looks striking day and night: tranquil yet awe-inspiring fountains in its grandiose complex will remind you of Princess Jasmine’s palace in Disney’s Aladdin.

Close by is what I considered to be the highlight of my trip. Gadong Night Market came as a surprise as it was relatively unknown and had few foreign visitors, but we were accommodated well by the English-speaking vendors.

It was reminiscent of the night markets in other parts of Asia with its affordable picks of grilled BBQ, fried pastries and colourful layered drinks.

Ubiquitous Malaysian dishes such as the nasi lemak (coconut milk rice with anchovies) and nasi katok (with fried chicken) cost as low as BND 1 for small servings.

Be sure to try Brunei’s signature pandan leaf-wrapped glutinous rice cake dish kuih wajid which is very similar to the Filipino biko and other types of kakanin. There’s no way you’re walking out of here hungry!

After having early dinner at the night market, you can burn it off with a window-shopping stroll inside The Mall, but not without ending your day on a sweet and elegant note.

A great discovery we made was the Rizqun Coffee House, which is connected to the five-star Rizqun Hotel. By 8 pm, take advantage of the café’s unbeatable buy one get one promotion where you can get two gourmet cake slices for only BND 3.

Sometimes, you have to see something for yourself to believe it, or prove the contrary. I’m glad that prior to my trip, I wasn’t discouraged by constant remarks online that there was nothing to do in Brunei.

Instead, I refused to believe the reviews, took them as a challenge and eventually proved otherwise. After all, never having tried something (such as visiting a certain destination) is enough reason to give it a shot.

Surprises, not knowing what to expect, or not expecting anything at all could possibly let you have one of the best and most memorable travel experiences.

Malaysia – If you have a lot of spare time the following day, you can also take a day tour outside Brunei to nearby Malaysia where you can legally get a drink or two. Reach the cities of Miri (famous for nearby caving) in 4 hours and Kota Kinabalu (famous for one of the highest mountains in South East Asia) in 8 hours by bus.

About the author: Kevin Watson Tsai has been to most of SE Asia and hopes to be appointed consul someday. But for now, he continues to be an advocate of independent travel. While abroad, Kevin is particularly fond of exercising his foreign language skills and discovering great bargains! Check out his website and his Instagram account here and follow him on Twitter @thetrvlguyshops. Photo: Jordan Morrison.