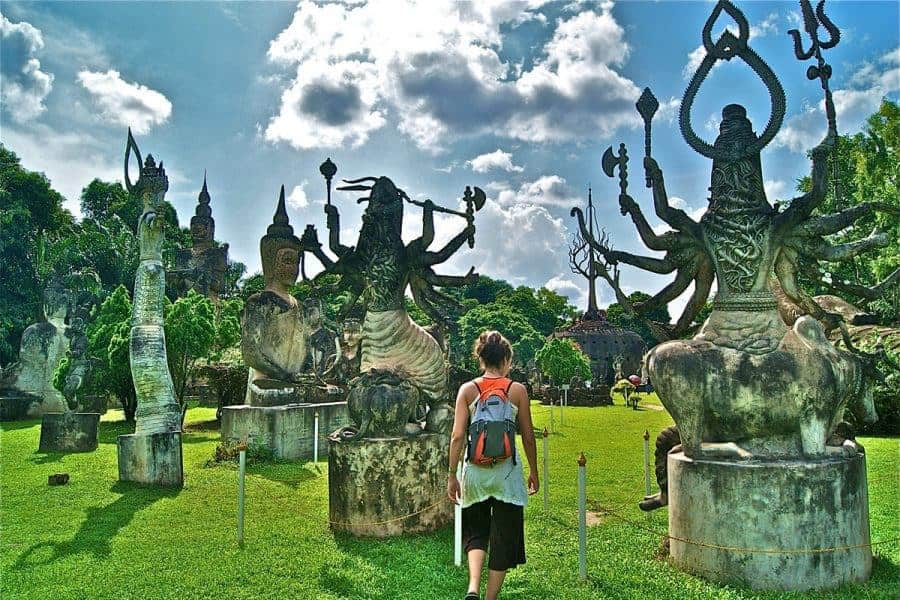 Located on the banks of the Mekong, Laos’ charming Capital, Vientiane, is more of a sleepy overgrown village than the usual frantic, bustling Southeast Asian City.

Riding a bicycle around the quiet frangipani lined streets of Vientiane is a great way to explore the city and is certainly a privilege you can’t do in many of Asia’s capitals. From the heavenly smelling bakeries to the grand colonial architecture, (there’s even a replica Arc de Triomphe monument!), you’ll spot the French influence everywhere you look.

Yet, with monks with orange umbrellas wandering the streets and steaming noodle stands – the city has the distinctive Asian twist – of course. The atmosphere is certainly laid back and unlike some places, you won’t be pestered for a tuk-tuk every five minutes – most of the drivers are asleep!

As the sun begins to set, head for the banks of the Mekong River. Take a seat at any one of the cheap riverside restaurants and try the delicious river fish. Sipping a Beer Lao as the sunsets overlooking the Mekong is a must.

Where to Stay in Vientiane

A focal point of the town is the ‘Nam Phu’ (Fountain) located on the main Setthariat Street, where you’ll find many of Vientiane’s popular restaurants, bars and cafes. There is a large selection of accommodation from your fancy riverfront colonial style hotel to your cheap youth hostel. Some recommendations include…

Barn1920s Hostel – This charming hostel (1920s themed) gets great reviews from travellers who love the cosy atmosphere, large curtained dorm beds and super friendly staff. They have a small kitchen and the common room is a great place to meet fellow travellers to discuss your travels in Laos. They also serve great coffee! In a great location within walking distance of all sights and with beds from just $8 US per night, it’s no wonder this is a true traveller favourite!

My Box Hostel & Cafe – A friendly and stylish hostel in a great location close to many bars and restaurants. Free breakfast of toast, jam, fruit, tea and coffee included as well as free water available all day. The dorm rooms are new and modern and each bed has a privacy curtain, plug socket and light. The place is also exceptionally clean. As one guest put it “the bathrooms are ‘Monica’ clean” (Friends reference for those that understand!). Dorm beds from $10 US per night.

Sailomyen Hostel – Another well designed hostel with clean, modern dorm rooms and a little courtyard great for chilling. Located slightly outside the centre (15 minute walk), guest still find the location appealing. Beds are clean and comfortable and the free breakfast and coffee is delicious! All in all, great value for money with dorm beds from $8 US and double and twin rooms from just $20 US. A good option for couples.

Vientiane Garden Villa Hotel – For couples and families looking for a little more luxury (and a bonus swimming pool!), this hotel is a good option. Close to the centre, this hotel is around 10 minutes walk from Riverside but set in a lovely garden which feels peaceful and is especially quiet at night. Rooms are clean and spacious, from $42 US per night.

VKS Hotel – Another slightly more upmarket option for those looking for a private room and hotel experience in the capital. Great location right in the heart of town with attached cafe and good breakfast included in the price of the room, WIFI is also very strong for those working as they travel. Double and twin rooms from $37 US.

Things to Do in Vientiane

About a half hour drive away from Vientiane, you’ll find Buddha Park. (Xieng Khuan) A quirky sculpture site that is home to over 200 concrete, slightly bizarre Hindu and Buddhist statues, including a huge reclining Buddha. The park was built in 1958 by a self-acclaimed Priest-Shaman named Luang Pu Bunleua Sulilat who wanted to spread his philosophical and spiritual ideas through his sculptures.

He also built a similar site just over the border in Nong Khai, Thailand called ‘Wat Khaek’ after he was forced to flee to Thailand because of the revolution in Laos. Many tourists hire a tuk-tuk for the whole day to explore Vientiane’s main sights, which includes the trip to Buddha Park.

Pha That Luang is a dazzling golden stupa situated on the East side of Laos’ capital, Vientiane. It is a highly important symbol of Buddhism and the national monument of Laos. Legend has it that this was once the site of an Indic temple dating back to the 3rd century that housed a piece of Lord Buddha’s breastbone. The temple is also the site of one of the largest and most significant temples in Laos taking place on the night of the full moon in November; when thousands of locals encircle the Stupa with candles. It’s a wondrous sight.

Vientiane’s concrete version of the Arc de Triomphe is at first an unusual sight in Laos. Built in 1969 to commemorate the people of Laos who died in pre-revolutionary wars. Climb the stairs for great views over Vientiane.

There are many temples in Vientiane, but the oldest and prettiest is Wat Si Saket, which dates back to 1818. With its pleasant courtyard and interesting murals, the Wat makes for a worthwhile visit.

During the Vietnam / American War, more bombs were dropped on Laos than on the whole of Europe during World War One! And, ironically, Laos was not even involved in the war in which they suffered such hardships. The sad truth is, that today there are many unexploded mines littered across the countryside, still today causing injuries and loss of limbs to many. The UXO Museum explains the work being done to uncover the mines and prevent further injury – volunteers and donations are much needed.

Had your fill of noodle and rice dishes? Again, inspired by the French, Vientiane has a great cafe culture. You’ll find delicious baguettes, pastries, cakes and fresh baked goods in Vientiane’s selection of great eateries. Some of the best include Joma Bakery, the Scandinavian Bakery and Croissant D’Or.

With live music and an always vibrant atmosphere, the restaurant/bar ‘Khop Chai Deu’ is one of the most happening spots in Vientiane. Located on the corner of Settharitat Street, opposite Nam Phu fountain, it’s a great place to meet other backpackers and have a few more of those essential Beer Lao’s!

Some of the temples in Vientiane offer a weekly ‘Monk Chat’ where foreigners are invited to speak to the monks, learn a little more about Buddhism and ask questions about their lifestyle. For the monks, it’s a great opportunity for them to practice their English. Foreigners must wear appropriate clothing and be respectful at all times. (Touching the head of a Monk is not allowed and women should not touch a Monk at any time.)

There are many adventures that can be planned from Vientiane, such as trekking, biking, rafting and stays in eco-villages. Check out some great local tours in Laos here.

From elsewhere in Laos

Many people travel by bus from Vang Vieng which is a 3-hour journey or from Luang Prabang, 7 hours.

From elsewhere in Southeast Asia

From Thailand (Nong Khai): From Bangkok, many backpackers take an overnight sleeper train to the riverside town of Nong Khai on the Thai/Laos border. (It’s also a popular route for those doing a border run from Thailand, as Vientiane is one of the closest places with a Thai Embassy offering a free 60-day tourist Visa.) From Nong Khai, it’s a short bus journey across the friendship bridge to Laos.

From Vietnam: The journey ‘Hanoi to Luang Prabang or Vientiane‘ is renowned in backpacking folklore as an epic bus trip, taking at least 24 hours and with lots of shenanigans taking place on the way! From tales of travellers getting abandoned at the border because they won’t pay to stay in a hotel for a few hours, to stories of sharing the journey with the aisles packed with rice bags and livestock, it’s certainly an experience and gives you some good stories!

Fly to Vientiane from Southeast Asia: Laos’ main airport ‘Wattay Airport’ are starting to cater for more international flights. Try cheap local airlines such as Air Asia for flights to and from Hanoi, Ho Chi Minh City, Kuala Lumpur, Phnom Penh, Chiang Main, Bangkok, Siem Reap and a few other nearby destinations in South East Asia. There is a $10 USD departure tax for international flights.