Phimai is around an hour away from one of the biggest Thai cities you’ve never heard of – Nakhon Ratchasima, also known as Khorat. Often ignored by backpackers, it is the jumping off point for Isaan; Thailand’s rural eastern states, famed for rice growing and delicious fiery cuisine.

Things to do in Phimai

The main attraction for tourists in Phimai is the Phimai Historical Park – 100B entrance fee for tourists – it’s a smaller, quieter alternative to Angkor Wat or a substitution if you don’t have time to make it to Cambodia.

Many of the architectural features are strikingly similar in appearance. Eastern Thailand was previously part of the Khmer empire, modern-day Cambodia and several other important Khmer ruins are found in what is now Thai territory.

Realistically, it’s not comparable to one of the biggest, most visited tourist destinations in South East Asia but will certainly whet your appetite for a future visit.

Having witnessed both I really appreciated the solace of Phimai – perhaps how Angkor was once upon a time, before Cambodia became accessible and the Tomb Raider franchise popularised the ruins.

The site is in good condition, hardly any tourists visit and the town is a quaint little place of everyday life, with little to no focus on tourism. As such, hardly any English is spoken outside of the hotels and some rudimentary Thai comes in handy. 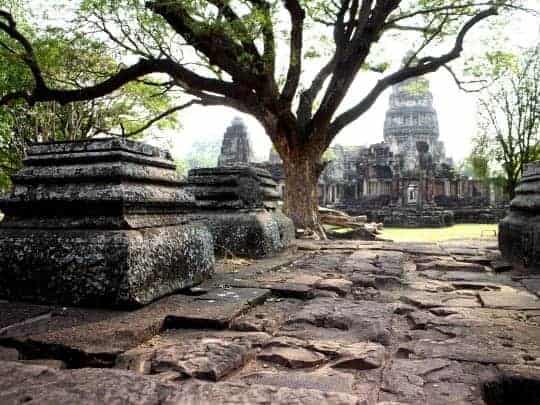 Another area well worth visiting is Sai Ngam, about a fifteen-minute walk from the clock tower in the centre of town. It’s one of the oldest and biggest banyan trees in all of Thailand which has grown, twisted and contorted itself all around a small temple island making it like a scene from a children’s fairytale.

Next door there are also some markets which are well worth stopping in to try some local Isaan foods. 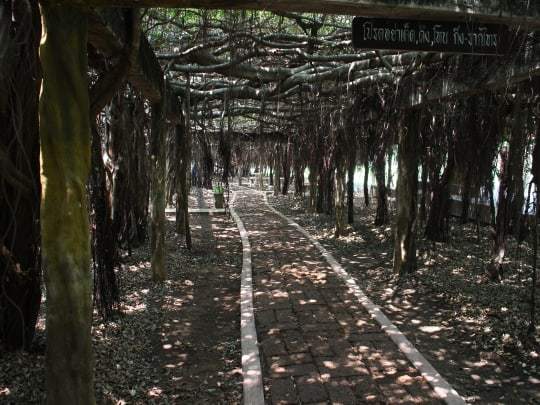 The town itself is small, easy going and walkable, with all the usual Thai amenities, 7/Eleven, ATMs, a few bars and a night market.

Where to stay in Phimai

Accommodation options are pretty slim, but there are a couple of good options.

Phimaiburi is a well located basic, but clean, option, close to the main attractions. Rooms there cost $16 USD.

Phimai doesn’t have a huge variety of choice, but there are several worthy street stalls and walking around will help you to see what’s popular.

During the day a lady sells a fantastic chicken drumstick noodle soup on the same road as the Historical Park entrance, on a corner just past the delightfully named Ladyboy Wedding Studio.

In the evenings the night market pops up on the road in front of the clock tower, which has several stalls and lots of inexpensive choices including the Isan staple delicious grilled pork (muu ping) and sticky rice (khao niao)

Getting in & where to go next?

About the author:  Ben is a keen traveller who is currently eating and photographing his way around South East Asia and writing about his experiences both on his own website and for us as an ambassador. You can follow more of his writing on his personal blog, .