20-year old student Laura Davies, on a three-month internship with S.E.A Backpacker Magazine, spends the day in a rice field learning about Asia’s most important grain…

As the World’s largest exporter of rice, Thailand’s country and culture revolves around this tiny pearly grain. Paddy fields dominate over half of all the arable land area and consume over 50% of the country’s labour force. Rice can also be found throughout the Thai menu, in all its forms and varieties. The most common type of rice grown in Thailand is Jasmine rice, known locally as ‘Hom Mali’ and it is in a paddy field full of the crop that my story begins… 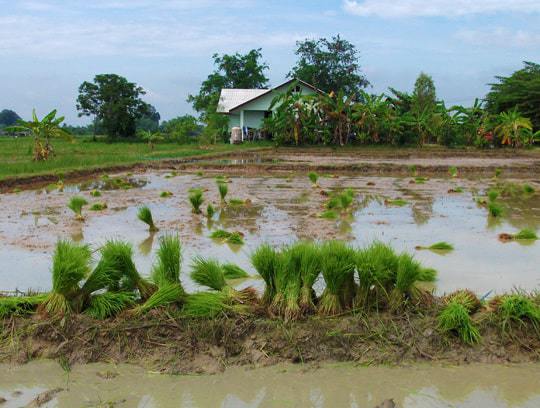 The paddy field ready to be replanted in Chiang Mai, Northern Thailand

Today, the S.E.A Backpacker team and I spent the day knee deep in thick mud, bent double in the scorching sun, handpicking young rice plants, as frogs, crabs and all manner of other creepy crawlies scurried out of my home-wrecking path. Why, you may ask? Because today I had become a farm-worker. 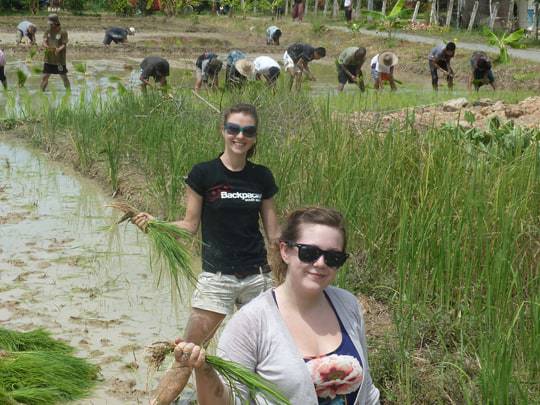 The S.E.A Backpacker team get stuck in (the mud) rice planting in Chiang Mai!

Wherever you travel in Thailand, a rice paddy is never far away. Just twenty minutes drive from Chiang Mai I found myself at a project promoting sustainable farming who were in need of volunteers to help with the transplanting of their young rice crop. Harking back to my days as a budgeting, bartering backpacker, I signed up for a morning’s manual labour at the promise of a home cooked lunch. What began as a free meal ticket turned into an experience that has transformed the way I will look at rice forever, instilling me with a newfound appreciation of this humble grain.

Transplanting is a traditional method of rice cultivation used across Southeast Asia. This process requires the crop being seeded in one field, left to grow for a couple of weeks and then picked and replanted in another. Although this is time consuming and requires a huge amount of labour, it gives the seedlings an advantage over any weeds threatening their growth and allows for the careful management of water levels. Despite there being modern, expensive machinery capable of doing the entire process, the farm at which I had arrived was an organic farm. They did the whole process by hand…

As I picked away at the never-ending lines of crop hour on hour, I had more than enough time to stop and think. My fellow farm-workers kept my lagging spirits high with their unfading smiles and the younger girls sang sweet melodies to help the time pass. The simplicity of their rural lifestyle on this organic farm was one that almost captured me in a trance. I felt as if I had been transported back in time, to a day before machinery and modern farming techniques, when farming relied on the human hand and animals acted as tractors.

In comparison to our increasingly materialistic, money-focused lives in the West, I began to find this simple-life all too tempting. One young farmer worker explained to me that during the rice season they simply work hard, eat hard and sleep hard. This hard-working attitude was blatant; they never once stopped to moan about aching backs, “trench foot” or sore hands, they just carried on relentlessly and got the job done. The team’s efficiency and speed was incredible, leaving me metres behind. In fact, my slow and tedious technique was found quite amusing by most, as were my high-pitched squeals as a frog leapt over my shoulder or a crab nipped at my calf! 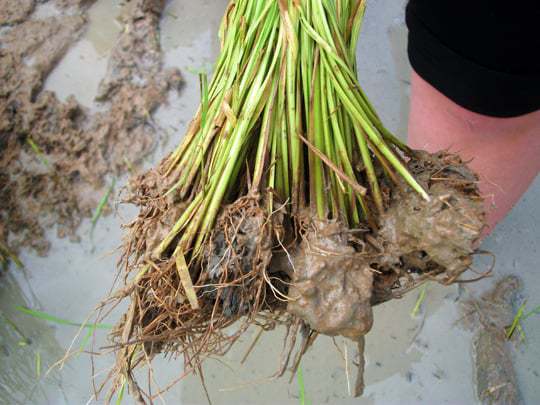 The muddy roots of freshly picked young rice plants, ready to be transplanted…

Over lunch, another worker asked me what my ‘real job’ was. As a first-year student in England whose lecture time amounted to 10 hours a week… I found this difficult to answer in comparison to the backbreaking work of these farm-workers. In that morning alone we managed to pick and replant a whole field of rice. When I asked how many grains each tiny plant would produce, the farmer laughed and looked towards the skies. “Who knows?” seemed to be his answer. The success of his organic crop was dependant entirely on Mother Nature.

In order to thrive, rice crop needs rain and plenty of it. To encourage the rainy seasons to be fruitful, there are many traditions and ceremonies performed across Southeast Asia. One such tradition is the ‘Parading of the Cat’. Villagers carry a female cat from house to house and each family must throw water at it, to make it cry. It is believed that these cries help draw on rain.

From 16th – 17th July the festival of Khao Pansa begins (otherwise known as the Buddhist Rains Retreat and one of the most important dates in the Buddhist Calendar), celebrating the beginning of the rainy season. Buddhist Monks were once said to retreat to their temples for three whole months to avoid stepping on or damaging the crop. Farmers believe it important to have their young plants in the ground before this date.

If such traditions and ceremonies succeed in bringing rain, then each rice plant could produce up to 200 grains of rice. However, if the rainy season isn’t so wet and conditions aren’t ideal, then this could reduce by more than half giving the farmer a bad yield and little, if any profit, despite the weeks of backbreaking work. 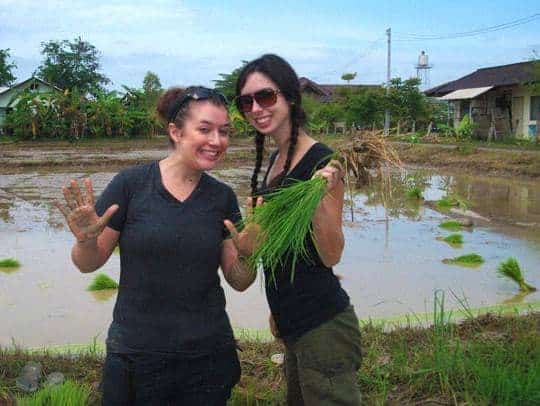 Without a doubt, us Westerners do not appreciate just where our food comes from. I speak for myself when I say that I was near clueless about the growing methods of an ingredient so prominently used not only in Thailand, but throughout Southeast Asia and imported around the World. Arguably it is this naivety that has lead to the current food crises, with soaring prices and increasing shortages. Perhaps if everyone spent a day on a farm experiencing just what goes into the production of our ingredients, then food would be appreciated and not taken for granted, wasted or thrown away.

So next time you gobble down a takeaway with a side of rice, spare a second thought to where those grains came from and for the people, knee deep in mud, whose livelihoods depend on it. 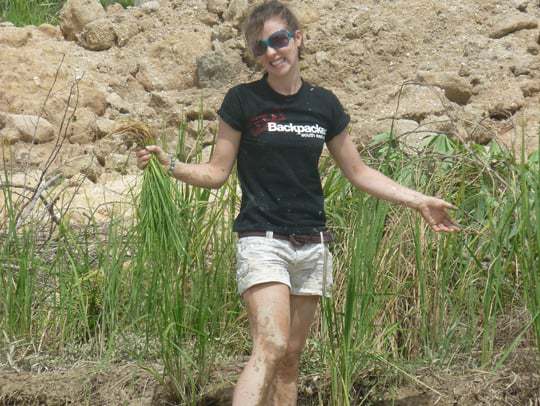 Covered in mud and learning a newfound appreciation for the hard work of a rice farmer! 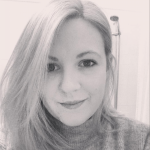