A trip to the China-North Korea border

The first thing I learned while travelling to Dandong is that nothing grows in this remote part of Northeastern China (known as Dongbei).

I had taken the high-speed train from Dalian, where I had been living and working as an English Teacher for a few months. I had heard, from numerous locals and veteran lifers, the mythical stories of the quiet town of Dandong in China’s North East which sits on the border, separated only by a few hundred yards of river, to Yeng Byen, a city in that most exclusive and mysterious land; North Korea.

From a safe vantage point, standing on the side of freedom, one could peer across the river, or even, if you were feeling brave enough, walk halfway across the Yalu River broken bridge, to get within spitting distance (though you should probably refrain from actual spitting as to do so would be to make some kind of strong statement.)

If you were lucky, and you grabbed the telescope provided at the end of the bridge at the right time, you might even spot a real live local North Korean citizen, going about their daily lives as if everything was normal.

I had hoped for a scenic view to pass by the windows of the train. The journey would take two hours and I still wanted to see more of China. But nothing grows in Dongbei. The north east of China is Siberia; literally, the same landscape, the same barrenness, the same nothingness. Instead of watching miles and miles of dry, empty brown land flick passed, I closed my eyes and waited for North Korea.

I, along with my friend Isaac, a fellow wandering teacher, were greeted by a giant bronze statue of Mao, as soon as we exited the train station in Dandong. I had been in China for a few months at this point, and still found it strange that the man who was responsible for an inestimable amount of deaths was still revered in this country, commemorated in every place you look.

Sure, he was the founder of modern day China, he did a lot for women’s and peasant’s rights, and even wrote some nice poetry, but the famine and cannibalism is mostly what sticks in my mind.

“Chairman Lmao,” Isaac said, and I ignored him.

We had come here for one thing. We had not even bothered to read up about what else there might be to in this town. We wanted to make our own personal history. We wanted to see North Korea. Well, it might be more accurate that we wanted to one day be able to say to someone in the bar: “You know, I went to the North Korean border once.”

Stories. That was our currency.

Isaac opened his phone and checked his GPS.

The broken bridge over the River Yalu

We walked to the Sino-Korean Friendship bridge, sitting over the Yalu River. The bridge, as well as its neighbour a few hundred metres downstream, was no longer in use after being attacked by Americans in the Korean war.

We stopped at the foot of the bridge, saw the war monument, saw the Chinese and North Korean flags sitting proudly side by side.

There, across the river, looking just like any other forgettable piece of land, was North Korea. I felt underwhelmed, but nonetheless took out my phone and took some pictures. This did not feel like a story worth telling. We wanted something more.

And we got it when an old Chinese lady approached us and asked in decent English; “Hello, you want go to North Korea?”

She pointed to a van parked on the side of the road, with tourists loading into it. We had not read about this on any of the travel websites or blogs. We had not even heard about it anecdotally.

Isaac asked how much and went through the bargaining process. I always let him handle the haggling. I am usually too eager to please and end up agreeing with extortionate prices, while genuinely thinking I’ve just done myself a great deal.

Isaac and the old lady came to an agreement and we were on the van. All the other tourists were Chinese. We did not know what to expect. Isaac seemed nervous.

“What did she mean, ‘go’ to North Korea? Since when could we just go there?”

“What if we just agreed to volunteer at a labour camp or something? What if that’s where we’re all going right now?”

Isaac tried to chuckle this statement off but I could see it lingered on him. His nose twitched. He stood up and went to try and communicate with the driver, who laughed at him and told him, presumably, to sit down. We were in the van now and there was no going back. If we had just paid 100 Kwai each to be taken into slavery then we would have to suck it up.

Obviously that was not the case.

A boat ride into North Korea

After half an hour, we pulled up at a small, shabby, wooden pier. A boat was waiting for us. On the edge of the pier, there was a little shop. We had some time before the boat was going to set off, so we decided to check it out.

All I saw was the same old snacks, beer and cigarettes I had seen in every other shop in China. Then I noticed the glass cabinet at the counter. Full of North Korean brand cigarettes. I have never been much of one for collecting souvenirs, but this seemed like a memento worth having.

Now I would be able to sit in the bar, pull out my authentic DPRK smokes (still unopened) and say, “Hey, I went to the North Korean border once, look, I have evidence.” We each bought a pack and then hopped onto the boat.

Now it might seem strange that Isaac and I boarded this boat without really knowing where we were going. Isaac had tried asking one of the other passengers, but they answered with “Shen ma?”

We had not yet mastered enough Mandarin, so the fault was with us, but we had faith, in what exactly, I am not sure, just simple faith.

The boat pulled away from the harbour. Now we were close. Now we could truly see North Korea, almost reach out and touch it. It struck me as odd how ordinary it all looked.

At this point I decided to check the GPS. We must be close to the border. I opened MAPS.ME and saw it. We were an inch away from the borderline. We were not stopping. We were going to cross. We were entering official North Korean waters. I grabbed Isaac.

We did it! We crossed the border!

I ‘screenshotted’ my map. Actually I did it about fifty times. It was done. We had entered the hermit kingdom and now we had proof. Now I could sit in the bar, an old man, and say, “You know, I actually went to the North Korea once.”

Isaac pointed at some birds, perched on the riverbed rocks, “Look, some North Korean ducks.”

The moment he said it, the birds flapped and flew away, over our heads, into China. “They’re defecting!” I laughed, a lot. An old Chinese man approached us. He was holding a wallet. He opened it. North Korean money. Banknotes. He offered one to Isaac, who studied it.

“No way this can be real. It’s illegal for their currency to exit the country.”

I was optimistic; eager to suspend my disbelief, and said, “Maybe it’s just old, out of circulation? Anyway, you should buy it.”

When Isaac paid for the money, the princely sum of eight RMB, that was confirmation enough that the money he was holding was not real. But it was another token of our trip. I bought my own fake money and we pocketed it and took a photo with the old man.

We had not expected this. We thought we were only going to get a sneaky glimpse of the world’s most secretive land. But it had shown us its secrets. The invigorating, sense of wonder was shared with the others on the boat.

Everyone’s eyes looked alive and colourful, full of wonder and achievement. Some of the other tourists approached us, all smiles, and snapped some selfies. Then we turned around and went back to the “real world”.

Back in Dandong, China

The paradoxical irony was not lost on me. As we ate in a North Korean cuisine restaurant, (complete with genuine DPRK magazine literature, and a weak signal of the nation’s television broadcast playing on a screen on the wall), we reflected on what had been a memorable morning. We had come to the land where those who inhabit cannot leave. We had entered a prison nation; a land where the people are trapped, and in doing so we felt liberated. 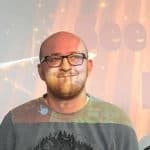 After spending over three years living and working in Asia, and rather enjoying writing about it, Richard decided to return to the UK to complete a master’s degree and pursue writing as a career. He has written many stories and articles based on and inspired by his experiences in Thailand, Vietnam, Cambodia and China. Follow him on Twitter (please).