A ghost town is always an appealing prospect, at least, it is if you’ve got a thing for Urban Exploration. That appeal is ramped up to the nth degree after a couple of days spent in the chaotic centre of Hanoi. It’s true that fans of urbex are, in their hearts, thrill seekers. However, existing in a permanent state of fight or flight (I couldn’t have predicted how stressful those roads would be) can wear a man down. And so… he seeks solace.

If you find yourself in this position, there’s no better place to head than the abandoned streets of Lideco Bắc 32. The taxi ride from the centre (we tried walking, seriously, don’t bother) costs around $5 USD. You’ll be whisked to a peaceful place where you can spend literally hours without anyone on a bike trying to kill you!

The creepiness of the place only slowly starts to set in. In fact, at first, you find yourself wondering if your day has been ruined by the urbexer’s nemesis – renovation.

Then you realise, only around one in every 20 houses (at most) appears to be lived in. Block after block of empty white mansions stretch out before you. Plants have taken over outside and, in many cases, inside.

Stray dogs patrol the street, though none of them seem unfriendly. Near the entrance to the housing estate, there appears to be a lone coffee shop with some local youths playing pool and chain-smoking over tar-thick drip coffee. Whether they were the residents of the currently occupied mansions or visitors from nearby homes, we have no idea. We stop for an intense shot of Vietnamese coffee before heading towards the centrepiece of the forsaken housing project.

The Makings of a Ghost Town

We approach the lake in the middle of the estate. The brick skeletons I’d already seen online now visible in many directions.

And it gets better and better!

We stroll around the pleasant deserted paths, taking in the magnitude of the enormous project, now in a rapid state of decline.

There are even references to my childhood to make me feel more at home!

Of course, it’s all well and good having a wander around outside, but it’s about time we checked out the interior of some of these decaying mansions.

On the whole, there isn’t much to see inside the buildings. The bare brick walls are reminiscent of the industrial look that was so embraced by bars in regentrified areas of my home country (UK) in the early noughties. The stairs are slightly nerve-wracking to climb.

But the views are worth it.

The attics are quite spooky.

From the fourth floor…

In some of the buildings, it appears there have been some rather strange goings on!

The painted buildings tend to have locked doors. There is one, however, that doesn’t…

Inside though? Same same but window panes.

What was the plan for Lideco Bắc 32?

Near the entranceway, there’s a building that had presumably been a show-home, with a sign outside highlighting the aspirational lifestyle that Lideco Bắc 32 was planning to offer its inhabitants. There would have been tennis courts, a gymnasium, and a jogging track, clearly designed to attract a rich, health-conscious clientele. (Notice how not one of the people pictured is Vietnamese!)

Despite the scale of the obvious and massive failure of the project, there’s a feeling that the dream was still somehow alive. There are people working on some of the buildings in an attempt to make this ghost town a liveable and attractive place to live. The topiary next to the cafe is very well maintained.

I discovered the ghost town thanks to Wander-Lush’s blog. She was the one who did the research I can now get my hands on, so hats off to her! I learned from her writing that the project ran from 2007 to 2012. According to her sources (which she doesn’t claim to necessarily be 100% accurate), somewhere around two-thirds of the mansions had been bought back in 2014. However, the owners only ever paid partial payments. Work in the area appeared to stop and the values of the buildings plummeted. Rather than continuing to spend on the project, most of the owners are simply sitting on their ass(ets). presumably waiting for some sort of shift in the housing market. Some people are moving in. A few of the mansions have gates, which appears to be the sign of habitation. Some owners are really going to town on their property!

An oasis for all

Meanwhile, local from nearby houses appear to love the space provided for them by this failed project. It seems I’m not the only one who celebrates an escape from the city’s hectic roads and increasingly unbearable pollution. Many people jog or cycle around the bizarrely pleasant, yet mostly deserted streets. Several men chat together, smoke and fish in the lake, despite the many signs that we translated as saying ‘No Fishing’. They tried to chat with us, and we would have loved to find out more about their lives and this strange area that we find ourselves in. However, sadly, my Vietnamese goes no further than ‘Cam-on’ at the moment and I don’t even pronounce that right.

As well as the local health enthusiasts, we have some pretty good amateur gardeners in the area… All over the place, people have set up allotments, not wanting the space to go to waste.

It’s hard to imagine what will happen to Lideco Bắc 32.

A part of me, of course, wants it to remain pretty much as it is. It currently stands as my favourite attraction in Hanoi, for many many reasons. However, I doubt very much that can happen. I guess it really shouldn’t happen. As wonderful as abandoned buildings are, I have to admit that they are a waste of useful space, especially an abandoned place of this scale.

No doubt, sooner or later, these buildings will either be knocked down or done up. Bad for the urbexers like me, better for the people of Hanoi. If I were to get political about things, I might even make the suggestion that the buildings should be given over to some of Hanoi’s poorer residents. It seems very unfair that the only peaceful area of the city I found during my stay should be designed for the richest in society.

I would strongly suggest anyone with the opportunity to visit while it remains in this state, should take it. ENJOY!

If you love abandoned buildings, be sure to check out my growing collection of Urbex sites across Asia here. Urbex Appeal (Dave) on Instagram… [ux_instagram_feed username=”urbex_appeal” photos=”8″ image_hover=”zoom” type=”slider” width=”full-width” columns=”4″ slider_nav_color=”light”]

Do you love URBEX?

Pin this to your Pinterest Board for others to see! 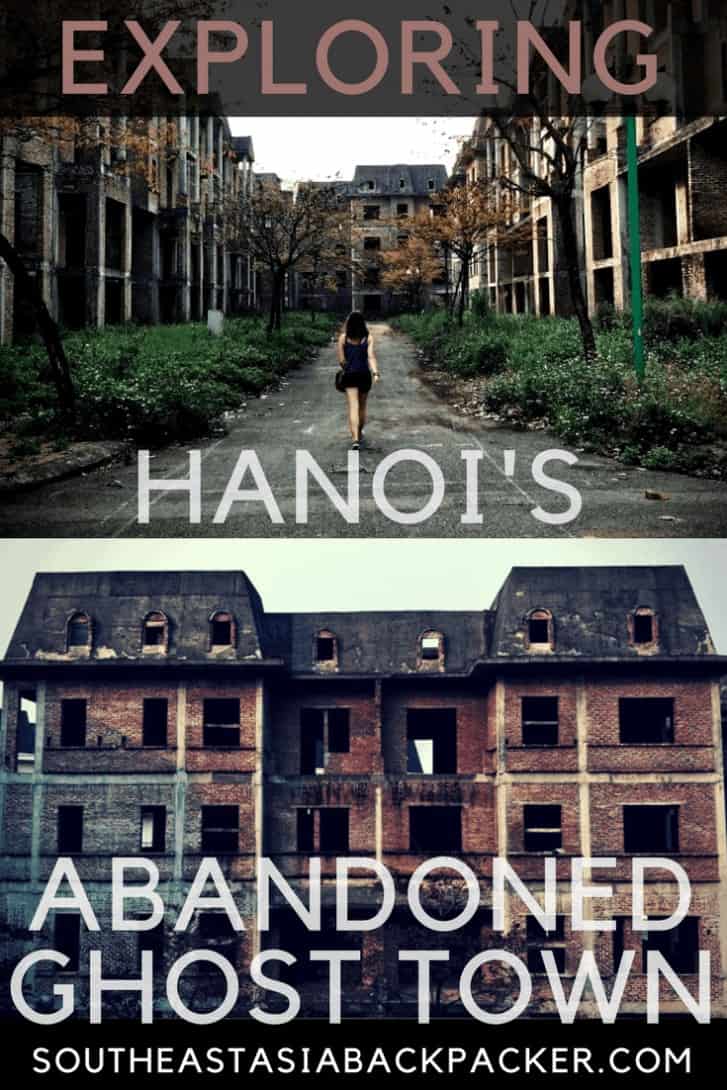