Thailand is known throughout the world for its home-grown sports, most famously Muay Thai, but that doesn’t mean you can’t find sports that are more familiar to backpackers. We’re talking about football, a sport that is hard not to love. 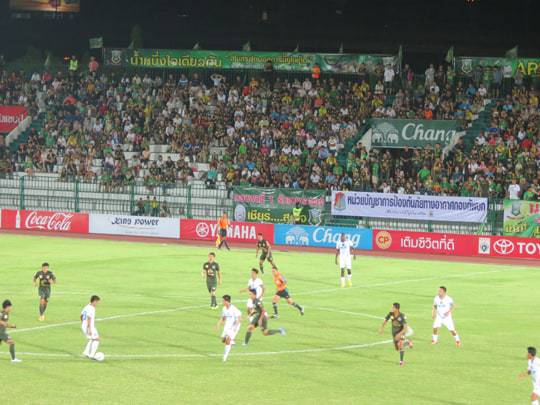 Love football? Why not take in a game while in Bangkok?

Last month the Toyota Thai Premier League Football (Soccer) season got underway, and exciting football matches are taking place throughout the country.  Luckily for backpackers, there are many high-quality teams to check out while in Bangkok.  Let’s face it: sometimes you need a break from the wats, from the markets, and from Khao San, and a Thai football stadium is a pretty perfect place to take that break. 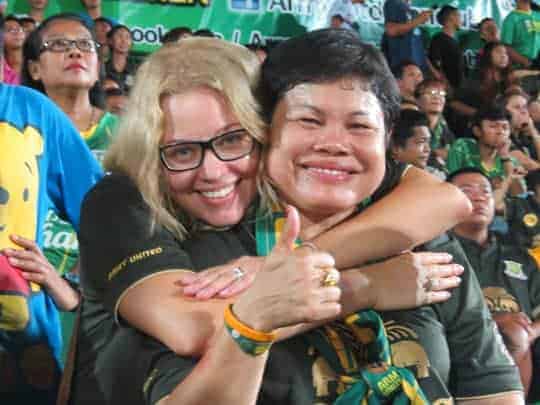 Football is the most globally recognized sport, and one of the few activities in the world that can unite nearly everyone.  If you watch football back home, you’ll obviously still understand the game here.  The differences lie in the stadium experience.

Why Not Support Army United?

The most accessible team for backpackers to check out is Army United, often just called Army; the team represents the Royal Thai Army, and the team’s slogan is “The Home of Gentlemen.”  Army has a very large foreign fan-base, and when you arrive at the stadium you’ll definitely see other backpackers and expats with whom you can strike up a conversation.  (There are so many foreign Army fans that there’s even an “Army Foreign Legion”!) 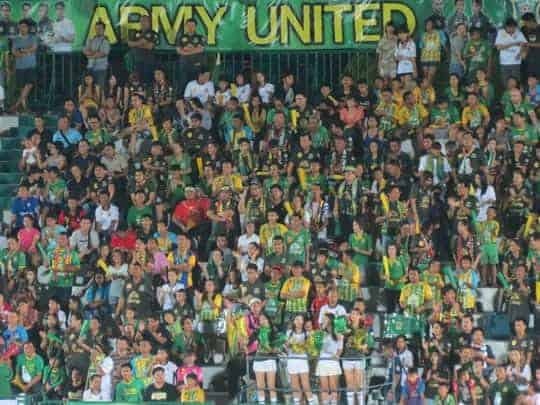 The packed stands of a Army United game

As an added bonus, if you follow British football you might recognize Matt Elliott, who played for Leicester City from 1997-2005 and played on the Scottish national team from 1997-2001 (including the 1998 World Cup).  Starting this season, Elliott is Army’s head coach, and you may have a chance to say hi to him after the game.  Though the players are mostly Thai, there are a few foreign players representing Brazil, France, Japan, and Slovakia.

Welcome to a Whole Lot of Atmosphere…

The main entrance of the stadium feels like a carnival before you even get inside, with entertainers and a cluster of vendors selling various snack foods; there are no concessions inside the stadium, so you’ll want to gorge on all the various Thai snacks-on-a-stick that you can get outside.  Army’s primary sponsor is Chang, so there’s also plenty of beer around the stadium!  (Pro-tip: you can’t bring bottles into the stadium, but you can ask your vendor to pour it into a large plastic cup that you can carry in.) 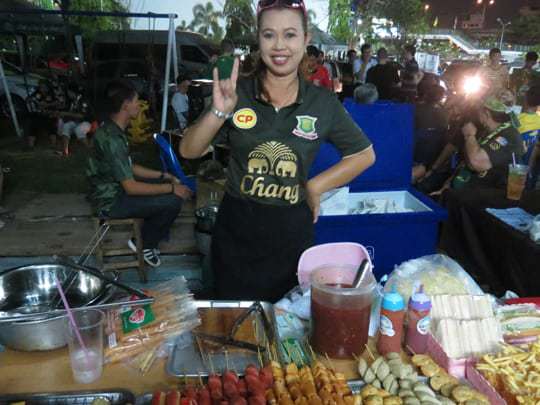 Delicious snacks to stock up on before the game starts

There is a team shop located by the main entrance, where you can stock up on souvenirs and buy nice football shirts for your friends back home starting at B200-B300.  The ticket office is at the main entrance as well; the cheap seats are B100, and that’s the section that you’ll want tickets for.  It’s a general admission section, which you access from the main entrance.  It’s the most crowded, lively, and atmospheric section of the stands, and pretty much all the fans choose to sit there. 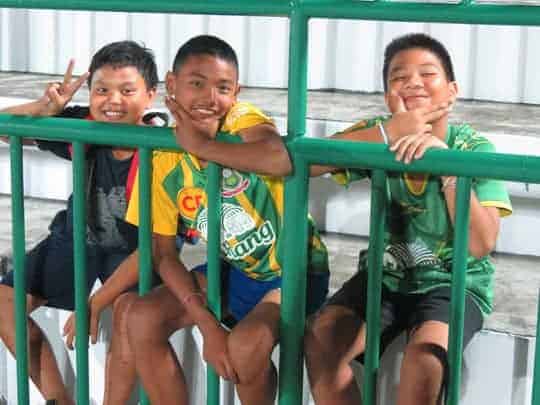 Once you get in, you’ll notice that with the exception of beer bottles, almost everything is allowed in the stadium.  There are even a number of die-hard fans who attend every game with large drums and megaphones, and this crew works almost as hard as the players by maintaining cheers and chants for the whole 90 minutes of the game.  The chants are mostly in Thai, with brief cameos of English and French, but even if you don’t understand the chants you’ll still catch on; by midway through the first half you’ll be yelling at the top of your lungs with everyone else, even if you’re only attempting to repeat the sounds of what they’re saying!  The chants will also get stuck in your head for days after the game. Don’t worry, that’s normal!

After the game, the players approach the fans to thank them for their support throughout the game with a friendly wai, the traditional Thai bow of respect.  After they wai, the players will walk up to the rail and you can say hello, give a high-five, or try to get an autograph on your new Army souvenirs that you bought before the game.  Unlike in Europe or North America, the stadium feels small and accessible, and you really get to interact with the players. 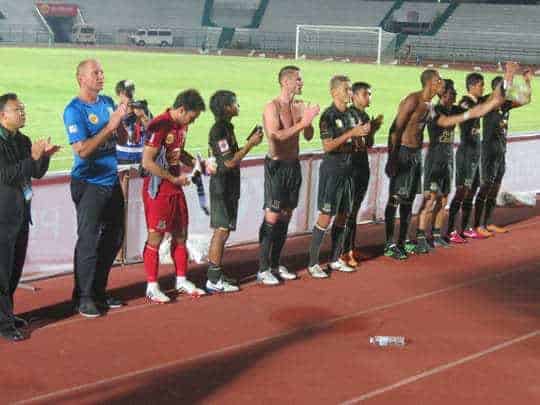 After the game players thank the crowd for their undying support!

How to Experience a Game for Yourself

To reach the Thai Army Sports Stadium, take the SkyTrain to Saphan Kwai and use exit number 2 to get to street level.  Approach any of the tuk-tuks or motorcycle taxis and tell them you want to go to “Army football”, and they’ll drop you off at the main entrance to the stadium.

For more information about Army United, you can visit their official website. With a heavy dose of Facebook’s “Translate” function, the official Facebook page is actually more helpful at keeping you up to date at; furthermore, a very unofficial and quite snarky English-language Army United fan page is helpful if you are looking for even more information. 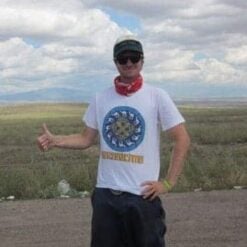 After six years of cold weather, Chase moved from Alaska to Bangkok to work and explore SE Asia. Along with his fiancé, Charla, he has completed some epic travel adventures like driving a car from London to Mongolia in the Mongol Rally! Chase is currently taking a break from travel living in the US and saving up for his next trip! Are you interested in writing for us?

One thought on “Forget Muay Thai Boxing, Thailand is Crazy for… Football!”