“It is by riding a bicycle that you learn the contours of a country best, since you have to sweat up the hills and coast down them. Thus you remember them as they actually are, while in a motor car only a high hill impresses you, and you have no such accurate remembrance of country you have driven through as you gain by riding a bicycle.” Ernest Hemingway

Firstly I’ll ask you to forgive me, this is not a scientific examination of cycling conditions around south-east Asia. It’s just my experiences. I’ve cycled in Cambodia, Vietnam, Indonesia and Thailand. I’ve rented a finely-tuned road bike to ride up a volcano, mountain biked around the massive Angkor Wat temple complex and drifted randomly around town on rickety old ‘shoppers’ that were held together with nothing more than rust and prayer. Although very different, these experiences all let me experience the countries much better than I could with any other mode of transport… 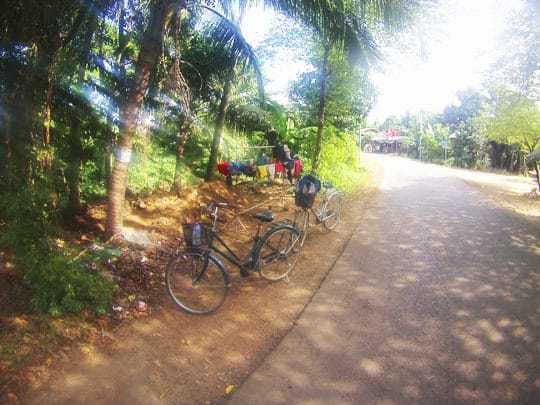 In Thailand, Chiang Mai specifically, you’ll find hundreds and hundreds of bicycles available for rent. Your hostel will have something with two-wheels, a bell and a basket which you can borrow for a few hours, or there are literally dozens of bike shops scattered all over the city – offering top-spec mountain bikes or clapped out old clunkers. It’ll set you back 60 Thai Baht to take one of the latter out for a day, just don’t expect to climb any hills or travel more than 8 miles per hour!

The best kept, fanciest bikes can be had at Cacti Bike, near the north-eastern corner of the old city walls. Sak, the proprietor, looks after his machines like a doting parent and is as protective over them too – don’t expect to wheel one of his steeds away from the shop without handing over your passport, full payment in advance, plus a hefty deposit.

There is a huge amount outside (and inside) of Chiang Mai’s walls to explore on two wheels. A trip north along the canal road, past the 700 Years Stadium, takes you to Huay Tung Tao, a beautiful lake. The route is relatively flat and not too long at approx. 16km one-way.

If you’re up for more of a challenge then you’ll want to tackle the Doi Suthep climb. It’s 15km of unremitting ‘up’ with a beautiful monastery at the top. Just slide down to your lowest gear and keep those pedals spinning. Stunning views back down to the city will keep your mind occupied on the way up, the beautiful temple and chatty monks (they love to practice their English and will gladly answer questions from tourists) greet you at the top and a super-fast descent full of hairpin bends will set your pulse racing as you drop back into town. 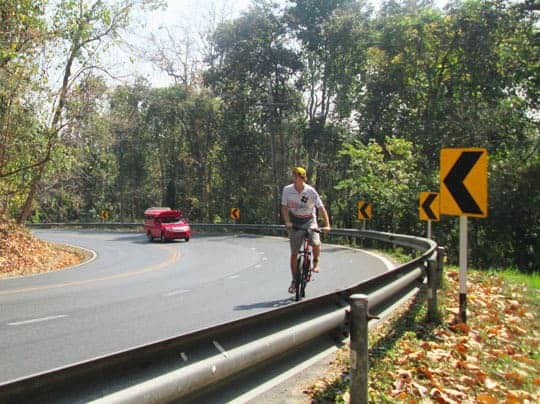 If all that sounds like way too much effort then you could do worse than exploring within the walls for a day, stopping for coffee as and when the mood takes you. Make sure to eat pizza at Street Pizza, a five-minute pedal out of the East gate to cap off your day.

Car and motorbike drivers in Bali, in my experience, will think nothing of putting themselves and each other in danger, pulling off terrifying overtaking manoeuvres on blind corners, all for the sake of knocking a few seconds off their ETA. But something magical happens when they see a tourist on a bicycle – all of a sudden they become careful and considerate, courteous and, dare I say it, patient.

I was understandably nervous about getting on a bicycle in Bali, even in Ubud which is typically known as the more chilled out part of the island, but my fears were misplaced. I rented a road bike for a week and explored the inner island thoroughly, climbing up Mount Batur and notching my first ever mountain ascent in the process. 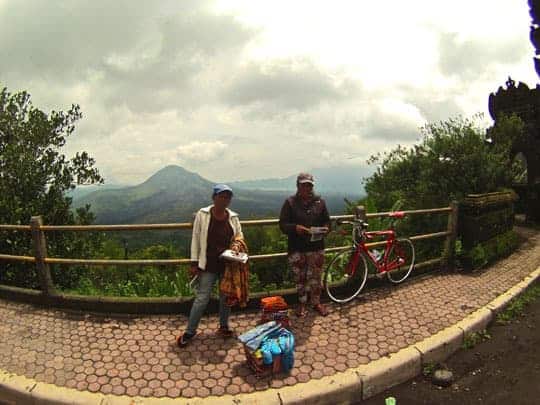 At the summit of Mount Batur, Bali, Indonesia

For those less keen than I on pedalling uphill there’s a couple of very cool alternative cycling experiences you can seek out in Bali. Many tour shops will offer an adventure cycling package, which typically involves seeing the rice fields by bike, taking in the blissful scenery at a pace sedate enough to really drink it in. Don’t expect to be tested on this one, as the groups tend to go at the pace of the slowest member, who may well be a 55-year-old lady named Marge from the mid-western United States. Far more enjoyable for those with a need for speed are the descent from Mount Batur packages, also widely available, where a group of around six to eight picked up by van, driven to the top, some 1,200 metres up, and then set loose to roll back down the mountain. Wheeee!

One negative thing I noticed was that the variation in road surfaces can be extreme in Bali. One road up the hill will be smoother than melted butter, while the trip down on a parallel street is a white-knuckle ride over slippery gravel, deeply-rutted tarmac and shattered paving stones. That being said, there is no broken glass anywhere to be seen, not just in Bali but in most of Asia. Somebody told me this is because glass is deemed too expensive to use in car windscreens, especially when the people seemingly take great joy in the possibility of a smash-up at any opportunity. Whatever the reason, it means less punctures which can only be a good thing! 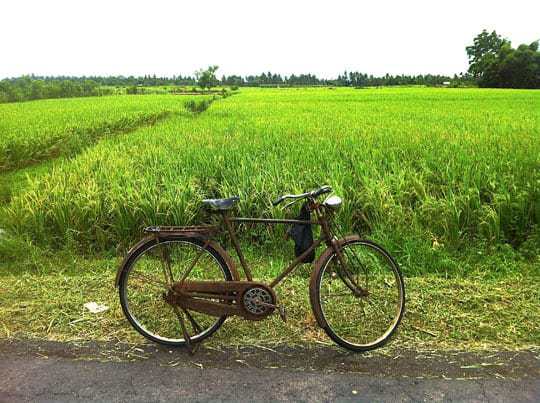 I will always remember my 26th birthday as the day I spent mountain biking around the stunning Angkor Wat temple complex, north of Siem Reap in Cambodia. Deciding to splurge a little (you don’t turn the big 2-6 every day, y’know), we booked a tour of the temples through a reputable, but slightly pricey company called Grasshopper. It was the right choice. 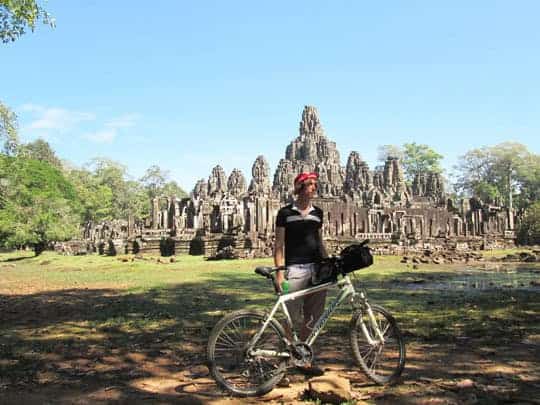 Exploring the ruins of Angkor by bike is the best way!

A savvy guide can make all the difference at Angkor Wat, as the crowds are massive and getting bogged down in them can really ruin your experience. You might have lofty ideas about communing with the ancient spirits of a lost civilisation, but it’s much tougher to do in real life when there’s a gigantic Swede nudging you in the ribs with his selfie stick. Biking around with our guide made it easy to cut corners, skip busy intersections and access parts of the site not often-visited. It was also mad fun taking on some minor trails and scrambling up dusty slopes. 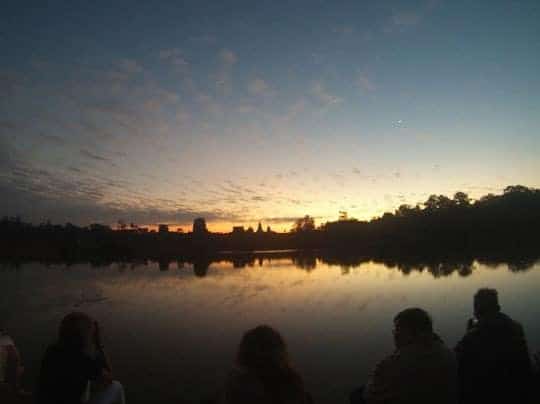 Sunset at Angkor Wat is unmissable

My other cycling experience in Cambodia was in Battambang, a picturesque old colonial town that’s very quiet when compared to the mad hustle of Phnom Penh. The calmer roads made it a joy to explore by bike though and the flat terrain meant it was never a struggle with the less than optimal bikes. Battambang was once the spiritual and artistic centre of the country but this ended with the Khmer Rouge – now, after many years of recovery, the city is beginning to get back some of that vitality. There are art galleries, cafés and rooftop bars opening everywhere and the city has a hopeful vibe. I advise you to plan your trip there now, before someone pens a rite-of-passage page-turner about the place and Battambang is firmly back on the Cambodian tourist map.

If you’ve been to Vietnam then you’ll know it’s a chaotic country, endlessly teeming with life and excitement. Streets in the main cities Hanoi and Ho Chi Minh buzz constantly with motorbike traffic, which can make it a less than inviting place to pedal. Instead, I’d recommend saving your two-wheeled exploits for when you’re out of the city.

Mai Chau district is a common trip destination for backpackers in Hanoi as it’s just a four-hour bus ride away from the centre. Prices are competitive for organised tours, but you can also go it alone if you prefer. Try to find a homestay that’s a little way out of town, as these will most likely have bikes which you can borrow to get around on and explore the valley. Some of the most stunning landscapes in Vietnam are here (and that’s saying a lot in the same country as Halong bay).

Also great for cycling is the area around Da Lat, with loads of waterfalls to explore in the vicinity. Be warned though, it is very hilly and you may need to work a bit harder to find a decent set of wheels. I rented a mountain bike from a stern lady on Lê Đại Hành, the main street in town, and it pretty much disintegrated within a mile of my leaving. It was a long, annoying push back to the start point. 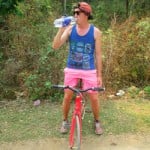 Everyone will have different experiences of the same countries and cycling’s no exception. I’d love to know where you’ve been and any tips for countries with great riding!

Don’t forget it is essential to have good travel insurance when cycling or biking in South East Asia, incase of an accident you want to make sure you’re in good hands.