If you’ve been to Vang Vieng’s town centre  you’ll be familiar with the alcohol buckets, 24 hours ‘Friends’ marathons and souvenir shops that compose the backpacker enclave. You’ll definitely be familiar with the popular ‘Tubing’ scene. You may not, however, have heard of Mr T’s organic farm. It’s only 4km away from Vang Vieng’s town centre, but feels another world away from the hedonistic tubing and party culture that the small Laotion town has become so famous for in recent years. Traveller, teacher and writer, Penny Atkinson describes a very different side to the popular Laotion party destination… 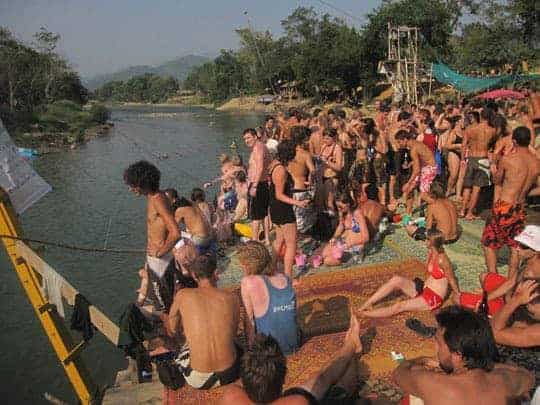 Mr T’s Organic Farm, which has been running for 15 years now,  was founded by the charismatic Thanongsi Sorangkoun (Mr. T) “with the goal of introducing organic farming methods in an area where chemicals and deforestation were ruining the land”. When I rang the farm from the town centre to ask for directions, I was lucky that Mr. T, a Laotion biologist, had a gap in his usually hectic schedule and kindly offered to pick me in his truck. I was impressed by this older but sprightly and dapper gent (in pressed jeans, a clean shirt and v-neck jumper) who swept up my heavy backpack into back of the truck before springing lithely into the driver’s seat. 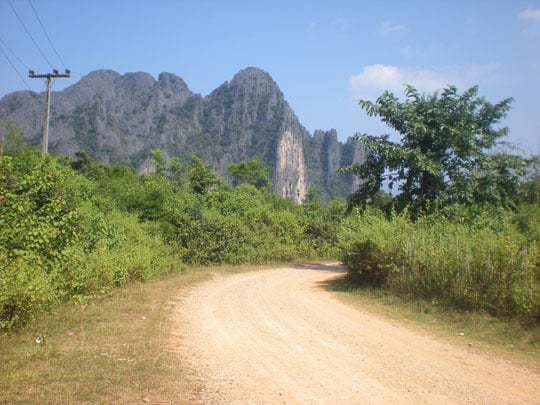 Upon our arrival, Mr. T. disappeared and I was left a little confused as to what to do with myself. Two young, local ladies and permanent residents (“wages support the many villagers who work here, and profits provide assistance for the whole community”) – were bagging mulberry tea leaves for sale at the farm restaurant, so I tried to make myself useful assisting them (although I suspect they probably had to re-do my clumsy attempts at bag stapling and labeling later). Thankfully a couple of other guests relaxing in the restaurant were able to give me the run down. It was pretty simple; just turn up and muck in with the different activities happening daily.  Of course, talking to some of the more long-term volunteers was also the best way to find out how a rookie on the farm can get involved most effectively.

Life at the organic farm adheres to a cyclical rhythm with a typical day for most guests beginning at 7:30am (or even earlier if they’re milking the resident goats), with a hearty breakfast in the farm’s organic restuarant. However, the altruistic backpacker need never be bored as there are a range of daily ventures and tasks get involved in. From teaching English in the local schools, helping in the kitchen or contributing to the myriad of physical jobs that occur every day on your average organic farm, the choice is yours. Work is not mandatory however… guests can also while away the time reading in the garden, or hire a bike and explore the natural beauty of Vang Vieng. Visitors may participate as much or little as they choose, although those who are boarding in the dorm room and contributing at least four hours a day receive a hefty accommodation discount! 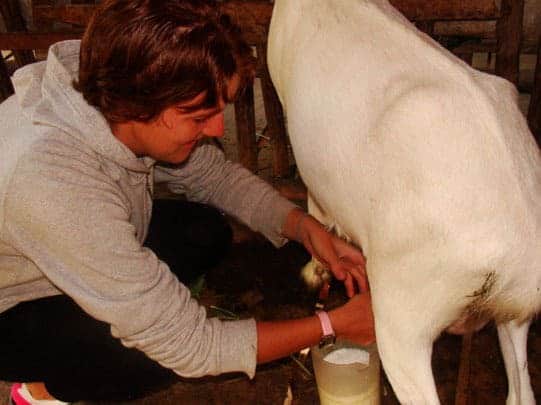 How to Build a Mud House

Whilst I was at the farm, a project in constructing mud houses was under operation.  All the work was done through traditional methods using spades, wheel barrows and our bodies! Most enjoyable was preparing the mud; performed with rolled up shorts and bare feet standing knee deep inside a dug out hole and squelching mud beneath our feet. Many hands make light work: heavy mud bricks were passed along in a construction line of volunteers and laid out in the sun to dry. Once dry, these bricks were cemented together with even more mud to create the skeleton of a house. Then bare hands were used to spread and smear more mud over these bricks to create beautifully smooth walls. A mud house would be merely boring without decoration, and a mixture of twisted grass vines and (surprise, surprise) yet more mud were used to create decorative designs along the bare walls. 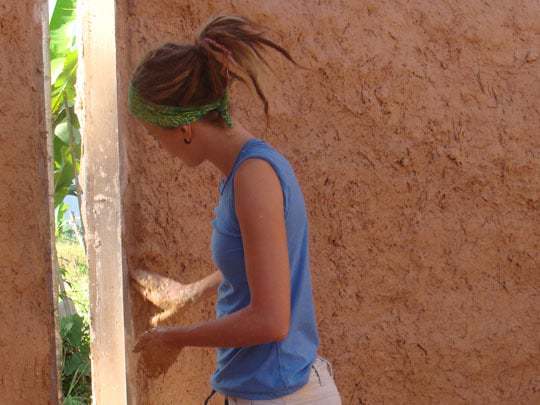 Mucking in making the mud house at the organic farm 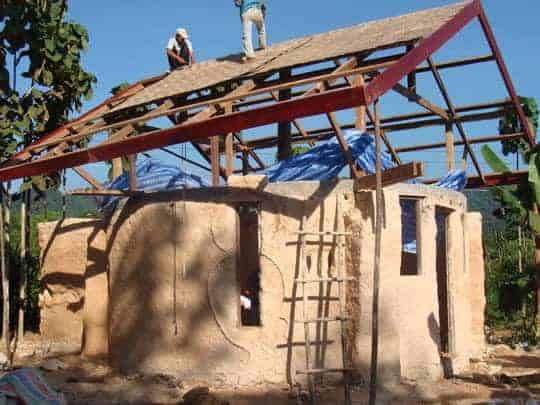 The construction of the mud house in Vang Vieng – almost finished!

Teaching English at the Local School

If getting dirty isn’t your cup of (organic, mulberry) tea, Mr. T has also made arrangements for volunteers to work in a couple of the local schools a five minute bike ride away.  This became my afternoon contribution and I assisted some of the more long term volunteers in the classroom. Not all of the volunteers may have been as proficient as trained TEFL teachers but it gave the children a chance to interact with foreigners and brought a little variety and excitement into their day.  In a cheesy but true travel moment, riding back to the farm on a bicycle borrowed from the farm, pedaled by a fellow volunteer, I smiled back at the children weaving around us on their own bicycles as they made their individual ways home. 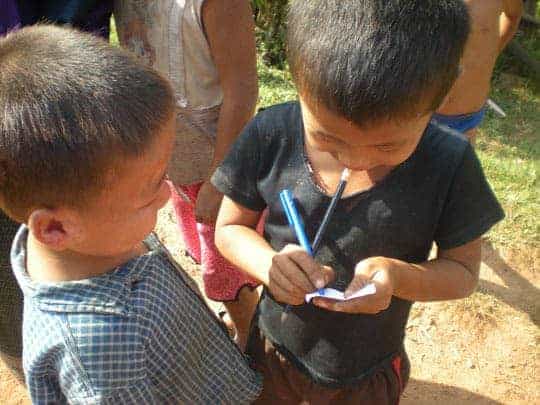 I’d recommend Mr T’s Organic Farm in Vang Vieng as a perfect opportunity for backpackers who want ‘to give a little back’ but don’t have the money to spend, or time to commit to long term projects. It’s also great for those spontaneous ‘drop-in’ travellers who often have no idea where they’ll be the next day or how long they’ll be staying anywhere. The farm also offers the flexibility of being able to assist on the farm as much as one feels like and try a variety of projects. It’s especially useful for budding gardeners who wish to learn more about organic farming methods.

Being an outstanding model of permaculture and community action, with a delicious restaurant too, the farm attracts many curious visitors. Every day or so it was amusing to witness a coach load of retiree American tourists zooming in, just long enough for a quick tour of the farm and to eat plates of fried Mulberry leaves and (organic) honey in the restaurant. The retirement crew then jet off again in their AC coach to fulfill their 3 week ‘Laos-Vietnam-Cambodia’ whistle-stop tour. They seemed pretty impressed at the altruism of the young volunteers: “hey you kids are doing a really great job” but it didn’t feel like hard work or sacrifice at all. In fact, sitting in the evening with fresh baked bread, goat’s cheese and a mulberry tea, it only felt justified to give a little back. 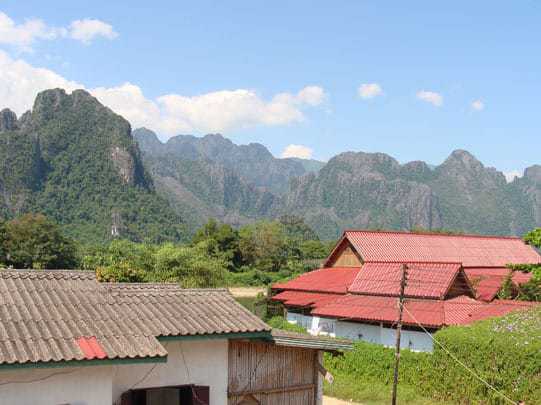 ‘Tubing’ is a popular ‘sport’ amongst backpackers on the South East Asian trail. Vang Vieng has become increasingly famous for the activity leading holy travel types to state that Vang Vieng has been ‘ruined’ by tourism. Tubing involves floating on a rubber ring down the river drinking a copious amount of alcohol and occasionally stopping off to leap into the water via a precarious rope swing or deathly slide. Thousands of travellers take part resulting in a crazy party atmosphere every day of the year. Sound like fun? You may prefer to read this article instead!