Rumors were as thick as the mosquitos as we prepared to cross the Thai-Lao border at Huay Xai. Tubing had been banned in Vang Vieng. No, just alcohol had been banned. Too many tourists had died. A local had died. Vang Vieng was over. Was it even worth going? 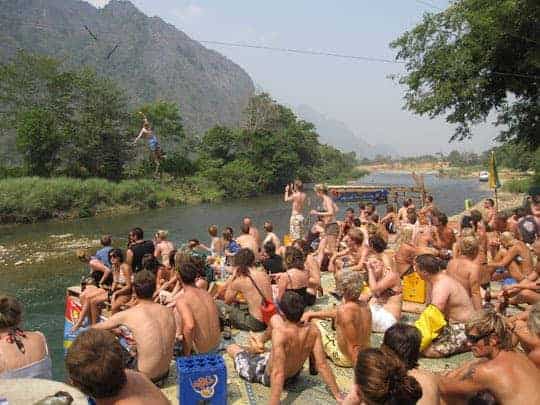 Of course, neither tubing nor alcohol have been banned, (just not at the same time anymore!) And the infamous riverside bars that made floating down the Nam Song the stuff of drunken legend have been shut down. And Vang Vieng is still worth visiting.

No idea what we’re talking about? Read our most popular article ever – ‘Newsflash Laos! Is this the end of tubing!?

The Landscape of Vang Vieng

Imposing limestone cliffs surround the valley like a mouth of jagged teeth. Caves honeycomb the rocks, inviting even the most casual spelunker to wander inside. BeerLao still abounds, the infamous narcotic-spiked treats Space Cakes and Happy Shakes are still there if you look in the right places. But if your focus is more cultural than bacchanal, look closer: some locals are trying to reinvent Vang Vieng as an Eco-Tourism destination. 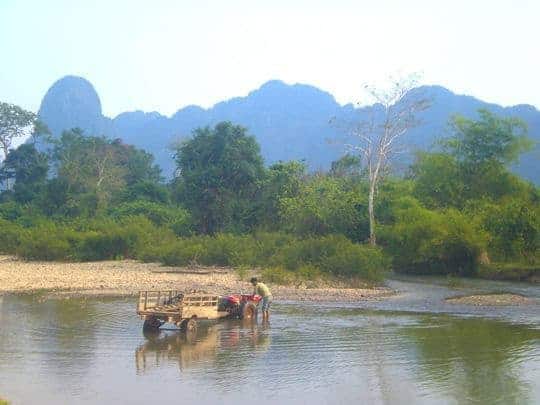 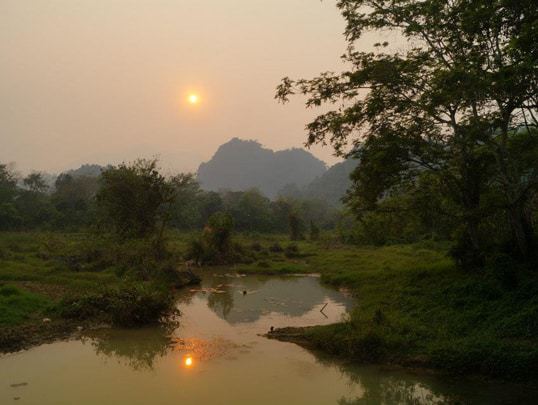 It is easy to see the potential that Vang Vieng has as an ecotourism destination.

Sengkeo Frichitthavong started the Sae Lao Project in 2008. His goal was to create an example of sustainable living in Laos and inspire local families to embrace green practices. His most ambitious project is introducing biogas technology, where animal manure is converted into power. The waste of four cows can provide enough energy to run an average Lao household, as well as create enough runoff to mulch and fertilize their garden. Converting to biogas would slow the practice of locals cutting trees for firewood, an important step towards environmental conservation in a country whose natural resources are already being taxed by demand from China. 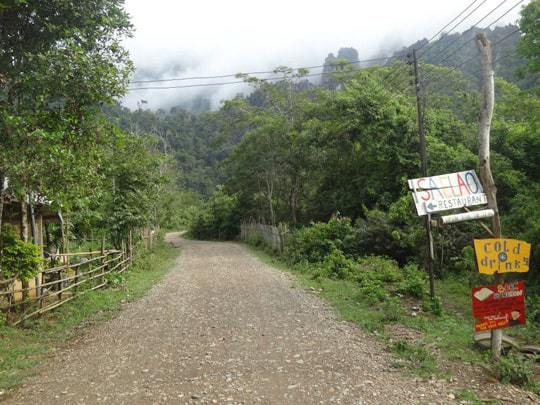 The Sae Lao Project is one of over 2400 biogas converters throughout Laos put in place by LaoBiogas and the SNV (Netherlands Development Fund).  The Saelao Biogas converter was established under this scheme.

Of course, Frichitthavong doesn’t want to stop at just one converter; indeed, more is needed in Vang Vieng. But the material to build them costs money – and firewood is free. Yet he hasn’t given up hope. He doggedly brings reusable cloth bags to the local market, offers a bottle refill service, and is slowly trying to convert his entire organization into being both sustainable and plastic-free. His organic farm and restaurant run with the help of a rotating cast of international volunteers and a six-person staff of local Lao people. The staff wear green and white tee-shirts that say “Sae Lao: Another Vang Vieng.” 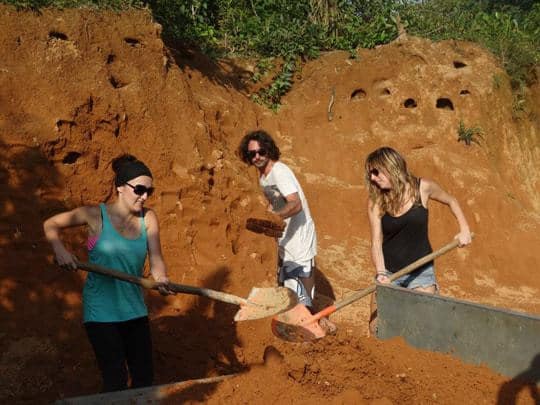 Katharina Berg and Basti Schlepps, backpackers from Germany, said that they had heard “horrible things” about Vang Vieng prior to the closure of the bars along the river. “I think maybe we wouldn’t have come, if they were still open, because we do not like that kind of thing,” said Berg, “We took a tube down the river and it was very peaceful. I think that if you are drunk you will miss seeing all of the nice things like the mountains and the trees.”

Berg and Schlepps were not alone in their enthusiasm for “another Vang Vieng.” Quite a few diners at the Sae Lao restaurant expressed their happiness at finding the former party spot to be a quieter, gentler place to visit. The Stewarts, a family of five visiting from the UK detailed their family-friendly itinerary of kayaking, caving, rock climbing, hiking, biking and enjoying the local cuisine. Their only regret, they said, was that they hadn’t planned for a few more days. 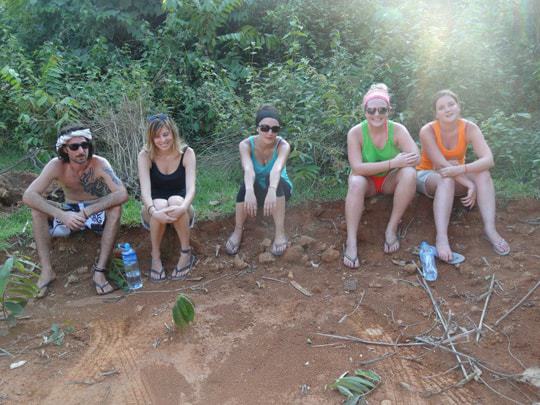 On the north end of town, on the very same road where tuk tuks still pull up with their racks piled high with tractor tires, is the Vang Vieng Organic Mulberry Farm.

Its owner, Thanongsi Sorangkoun, left a well-paid job as a government official in 1996 to become an organic farmer. Many people thought he was crazy, but Sorangkoun had a vision. Like his mentee Frichitthavong, he wanted to model sustainable living to local farmers and community members. Sorangkoun –  affectionately known as Mr. T – is a proponent of a holistic approach to social change. Both SAELAO and the Mulberry Farm are members of EEFA (Equal Education for All) and provide free English classes for local children with the help of volunteers.

(You can read more about volunteering at Mr T’s Organic Farm in our article here!) 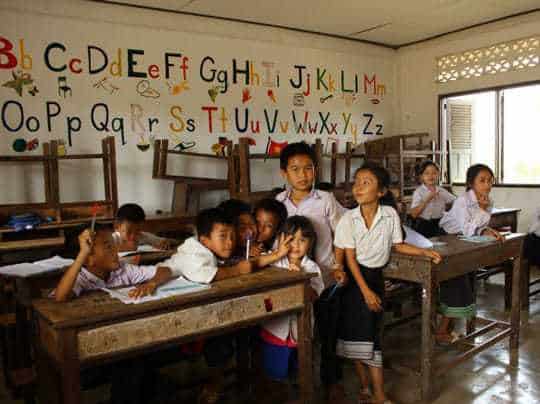 Today the Mulberry Farm boasts an organic orchard and garden, a highly-rated guesthouse and restaurant, a herd of dairy goats and one more Vang Vieng biogas converter. But the challenges facing Mr. T’s vision of a sustainable Vang Vieng have grown in pace to his success.

A few years after purchasing the land for his farm, the backpacker scene really took off. “Suddenly young people come from everywhere for drugging and party. It disturbed me very much,” he says, adding that the drugs, alcohol and loud noise from the bars also had a negative effect on the lives of his young students. Ironically, Mr. T has been credited with starting the tubing trend when he offered the use of tractor tires for his volunteers to relax on the river after a long day’s work.

To a passer-through Vang Vieng is still paradise: the hills are verdant and the meals cheap. But from their vantage point of several decades, both Sorangkoun and Frichitthavong have noted troubling long-term effects from the influx of tourism. Construction exploded in the last decade. The hills surrounding the town are being ravagedfor timber to build guesthouses and gravel to mix cement. The price of local goods and services has inflated beyond the means of some residents. At present there are 150 guesthouses and counting.

What Next for Vang Vieng?

It remains to be seen what Vang Vieng’s next incarnation will be. Tourism has slowed since the bar closure, but unsustainable growth and environmental damage remain issues that need to be addressed. An effective solution may require the efforts of both locals and travelers. If volunteer opportunities such as the SAELAO project attract a different class of tourist, Mr. T’s vision of a holistic change may come to pass. 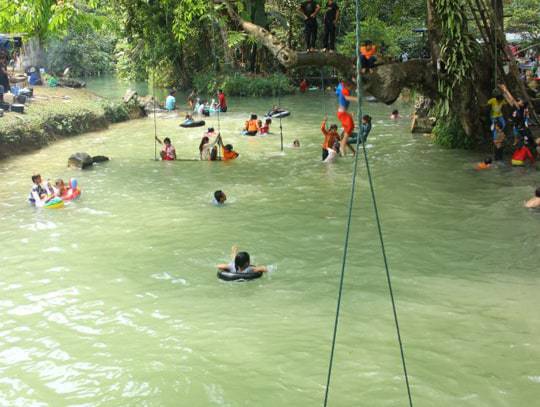 Tubing: just as fun, not as dangerous!

Some local business owners have expressed enthusiasm for the changing face of Vang Vieng’s visitors.

“The tubing didn’t shut down,” says Chris Perkins, who runs the guesthouse Pan’s Place, “The dying shut down. You cannot go out and smash your head on the rocks anymore. I’ve had some cancellations, sure, but on the other hand there’s less drunk people waking me up at 3 am shouting on the street. Almost without a doubt all the expats are happy that it’s stopped, and the drunken behavior has slowed.”

Just down the road from the Sae Lao farm is the Blue Lagoon, a popular splashing spot for tourists. Thrill-seekers still clamber up the rocks to Poukham Cave in their bathing suits, clutching bottles of Beer Lao. When asked if tubing at Vang Vieng was over, one bikini-clad Australian partier delivered an adamant no. “Nah, nah, it’s not over. They don’t have the bars anymore, so my mates and I just bought a couple of bottles of vodka and took them with. It was nice.”

It looks like as long as the falang are determined to have a good time, Vang Vieng will remain a party town. Let’s hope that they remember to recycle the bottles. 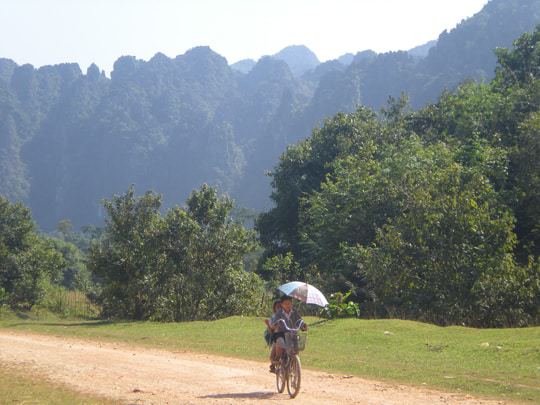 This article was written by Linda Stansberry who volunteered at the SAELAO Project in Vang Vieng, Laos. If you are interested in volunteering, check out their website at The SAELO Project.