After a chance meeting with a school teacher in the city of Luang Prabang, Northern Laos, four backpacking girls visit a small village where they teach English to a group of local children.

Flash cards, enthusiastic students, dancing and even a chicken in the class! Watch Courtney, Kaberly, Jacqui and Danielle at work in the classroom on their first few days. Take a look around the village of ‘Baan Phov Mok’ and see the children take Danielle across a river and to a nearby waterfall for an adventurous field trip! How did it all begin? (Video Commentary by Danielle Walker) Our adventures in Luang Prabang began in a local bar. We met a Laotian guy named Phon who approached me and Jacqui at the bar after overhearing us chatting about our interest in working with children while in South East Asia as one of the key reasons for coming away. Phon asked if we would be interested in teaching English in his village, Baan Phov Mok, (Baan meaning village) about thirty minutes away. He wanted help teaching the children English from native speakers. We nodded our heads enthusiastically! The Hike to the Village Phon arrived at our hostel around 11am. A tuk tuk drove us to the village but could only go so far as the road ended and turned into mud. I don’t think we have this kind of mud in the US, it was insane; but to be honest, I absolutely loved the feeling of it squishing between my toes. (A little weird I know) The muddy hike continued for another thirty minutes and probably could have been a little shorter if four Americans weren’t attempting the trek, but we made it. Before we even walked in the door of the hut where we taught, we were greeted with an opened case of Beer Lao, glasses poured and ready to go. “No thanks” Courtney said “I am a huge fan of beer, but let me teach these kids some English while it still sounds like ENGLISH.” 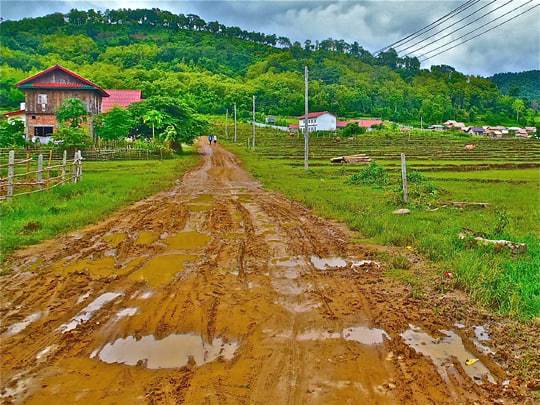 In The Classroom The classroom was one big room and more like a hut. There were no desks, chairs, books, pictures on the walls or furniture. There were two benches, one for sitting and one for writing. Then there was one whiteboard and one marker. And this is where the teaching began. At first it was uncontrollable chaos, Myself and Jacqui are teachers back home so we had an idea of how to handle the situation, but Kaberly and Courtney were lost. The children were all different ages and at differing levels of experience with the English language; and we had absolutely no plan of attack. I began the lesson with animals, first writing the word then attempting to draw the picture of what the animal looked like. The kids got a kick out of that. Apparently I am no artist, and they noticed that within two words. After a little while, we figured out that it would be best to divide and conquer and then things started to go much more smoothly after this. I took the largest group with the older kids, Courtney took three girls (the three most advanced), who really only needed pronunciation and Jacqui and Kaberly took the little tiny ones. Everything seemed to be going well and the children were enjoying themselves. Jacqui and Kaberly even busted out the music and were dancing at one point! By the end of the day I heard the entire group singing the ABCs perfectly. 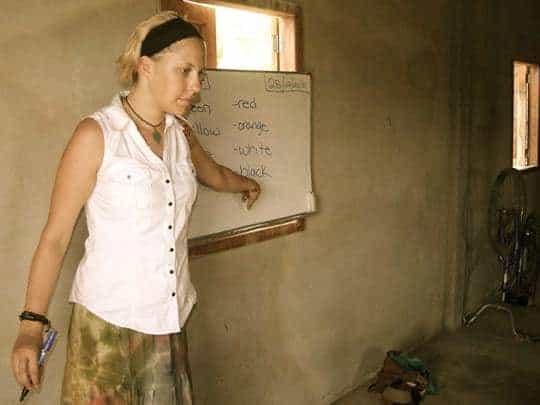 Danielle in the classroom teaching colours at the whiteboard 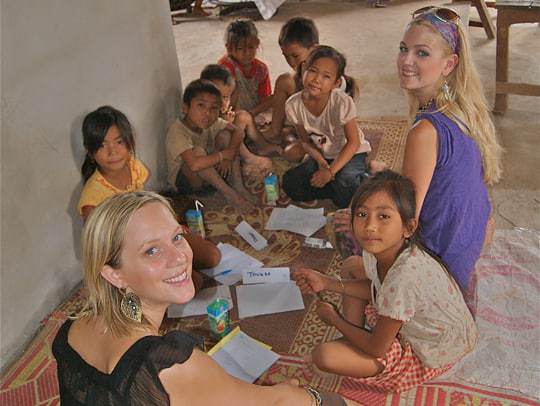 Kaberly and Jacqui in the classroom teaching the youngest ones

Getting prepared with props and books The next day teaching began with a review from what we learned the previous day; followed by more English lessons. But this time we had come prepared with books and props that we bought the night before and lesson plans prepared so that we could have an altogether more organised class! I took my  students to another hut in order to lessen the distractions and to concentrate on specific objects. The lesson went great for about twenty minutes. Then, the kids were more interested in the books we’d brought so I decided to switch things up and have a “silent reading time.” really, this was just giving them a break and the chance to explore the new books. They have never had any real storybook in their own language, so they were ecstatic to actually be able to read a real story. After they got familiar with the books, we read a book together as a group.. The book was in both Laotian and English which made the reading incident a blast. I would read the page aloud in English and then they would read the same page to me in Laotian. After both languages were read and the children knew what was happening in the story, we read it again in English. Well, I would read and they would repeat and follow along with each word. It really seemed to work wonderfully. We knew from psychology classes at college that there is a 7-year language threshold after which you lose your aptitude to learn new languages. But when I went from teaching 11, 12, and 13-year-olds one day, to teaching pre-school age children the next, I witnessed this first hand. The younger he or she was, the easier it was for them to mock my ‘z’ (as in ‘zoo’), ‘th’ (as in ‘the’), and ‘t’ (as in ‘tight,’ or ‘twin’) sounds, which Lao people usually have trouble with. A Lesson in Laos Language After a while teaching we decided it might be good for the kids to see that it was as difficult for us to learn their language as it was for them to learn ours. So – thanks to the English tutoring books that we bought,  the students could see a picture of the word they were learning, the word in Lao and the word or phrase in English. I would have them look at the photo, say it in English, and then teach me to say it in Lao. Judging from their laughter and pointing fingers I would approximate my success rate for the Lao language at 10%. I think the realization that a Westerner (who is supposed to be smart) could not say ANYTHING in their language was actually a positive thing for them to recognize, and it made the day more fun for all of us. The Field Trip On our final day teaching in Phov Mock Village, after teaching for a few hours, the kids tricked me into hiking up to a waterfall and going swimming for the rest of the lesson. We were only supposed to take a walk and practice our English by pointing out objects and practicing conversation! Oh well, every moment is a teaching opportunity and it makes learning fun during adventures like this! We learned what swimming is, jumping, climbing, holding our breath, water, waterfall, etc. It was awesome. On the way back to the village I knew it was all worth it when one of the students said, “today, we go to waterfall and I swim and jump in water.” it was his fifth day of English. 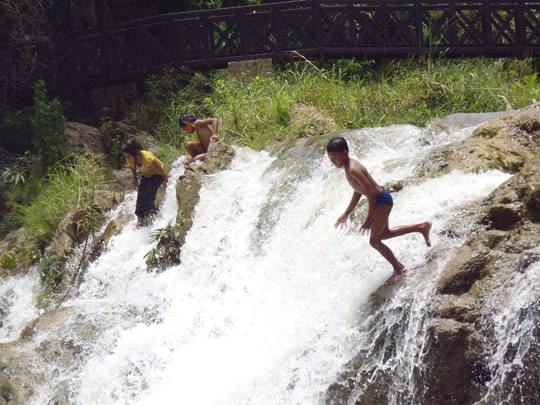 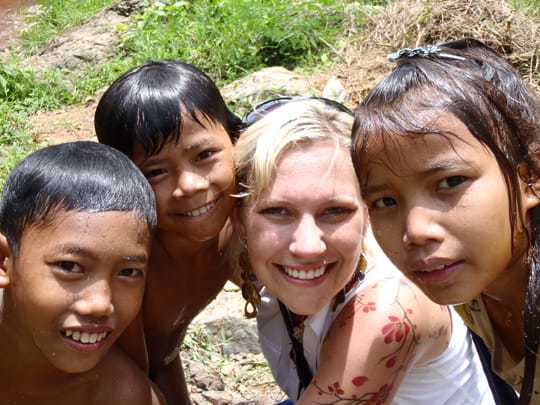 Teacher Danielle was tricked into a field trip at the waterfall

When it came time to say goodbye, I was so sad to leave them. The children were incredibly shy on the first day. We were strangers to them. On our last day, we were their idols and best friends. As we left, them they wrapped their arms around us and ran along side our tuk-tuk as we drove away for the last time screaming, “I love you!” In English! We couldn’t have imagined a more rewarding feeling. 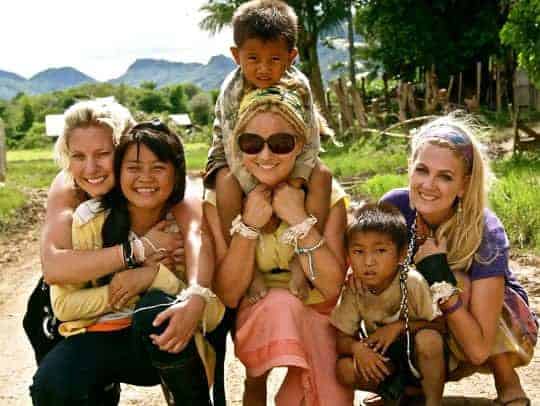 Subscribe to our feed via email or via RSS to be notified when new episodes come out, or follow our YouTube stream! Stay tuned for more soon! 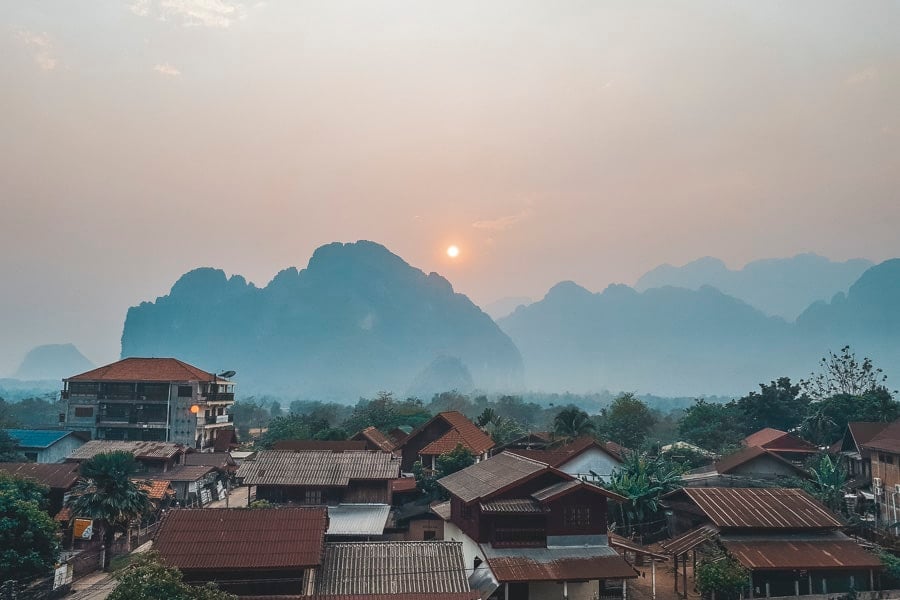