Every day of our lives we are confronted with the verb “do”: do laundry, to-do lists, even “doing” Asia.  But the best, yet most frowned upon, ‘do’ adverb is ‘nothing’.  This may sound lazy and boring, but to those who learn to let go of conventional expectations, they will find utter relaxation and peacefulness.

Back in our perspectives homes, we get caught up in routine, appointments, and the general whirlwind of the western world.  There is a constant clock ticking with a ‘go-go-go’ mentality that we are always late for something.  The word ‘multi-task’ doesn’t begin to cover the gadget obsessed culture we’ve become as doing merely one task is never good enough.  You have to be texting, scheduling, eating, and meeting a friend simultaneously and that’s on your lunch hour.  Don’t even get me started with the rat race of the work world.  But in general, as a society we have become obsessed with to-do lists, feeling accomplished and satisfied only when we check off items.  Post university, lazy days of watching TV and eating in bed make us sick with guilt and we overcompensate with early morning workouts as if laziness needs to be justified.

Doing nothing in particular is not lazy at all; it’s the optima of letting go and living in the moment.  It sounds incredibly indolent but to be honest it’s incredibly difficult for most to do.  To lie on a beach endlessly without any worries, mental planning, or any strenuous physical activity can be anything but relaxing to some.  It’s downright torturous and boring.  But if you let your mind release itself of all the constant focus on future plans or past events, your tension will release and you’ll feel sublimely happy.

It’s a Buddhist thing really; learning to let go.  No one would call a monk lazy; they’re simply finding their zen.  But backpackers on the beach for days get seen as wasted bums.  Sure, maybe some are nursing a hangover, but backpackers tend to release themselves of societal norms in general.  That’s what’s great about travelling: learning to release yourself from daily routine and discover a new concept of reality.  And Asia is the perfect place for this discovery.

Anyone whose ordered food in a Thai kitchen knows never to go when starving because it will be good long while before they even begin to cook your dish.  And if you’re in a group you can never expect to eat at the same time.  At first, this is frustrating.  But once accustomed to the culture, you learn to relax, enjoy the beer and conversation beforehand, and always eat a tiny snack before heading out to a restaurant in a large group.  (Because you never want to get hangry aka so hungry you get angry.)

But not all travelers have learned to let go of the word ‘do’.  In fact, some are the worst abusers.  Those with limited time tend to create schedules that keep them in overnight buses half the week.  Not only are you losing sleep, but you’re losing the chance to appreciate the culture around you.  Asia simply moves at a slower pace; time works in approximation rather than specifics.  Buses run late and meetings get put on hold.  There is no concept of “on time”, particularly since this is a world filled with sporadic random monsoons.  Now that’s a situation where you can literally do nothing. 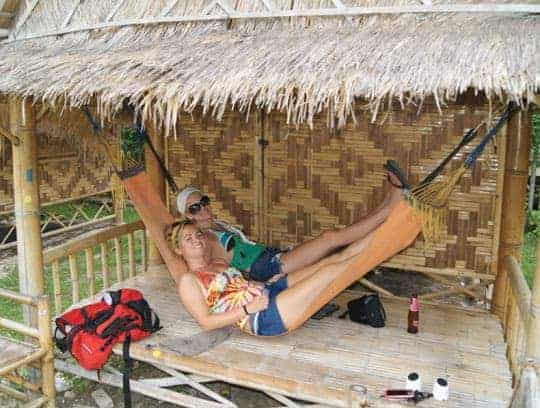 The problem with creating an itinerary that has activities planned each day is that you’re still stuck in the mental conventional daily grind that most of us are trying to escape.  Let go of the idea that you have to do something.  Whether it be visiting temples or taking boat tours, you don’t have to do anything.  Simply by strolling streets, endlessly eating when you want, window shopping in grocery stores, discovering hidden alleyways while getting lost, or sipping tea by the road people watching for hours, you are releasing yourself from the active verb “do”.

Sure reading a book, relaxing in a hammock, or watching a sunset can be considered something done, and rightly so. But my point is to let go of the expectations you have about what you should “do” while you’re in Asia.  There is no list you need to tick off.  You cannot “do Asia” by visitingthe same same temples and riding elephants constantly just because some tourist office tells you that’s what there is to do.  Worry less, relax more.  Plan less, unwind more.  Do less, be more.