“I could get used to this”

For many, travelling is the ‘time of your life,’ an inspiring, fun-filled adventure that happens but once in a lifetime. It’s a mere ‘weekend break’ in the grand journey of life, something you ‘get out your system’ before resuming your position in the ‘real world.’

But what if you decided you’d rather not go back to the ‘real world’? I’m having too much fun! I don’t want to swap my backpack for a briefcase, just yet. An interesting idea, you think, but a far-fetched fantasy nonetheless! Or is it? 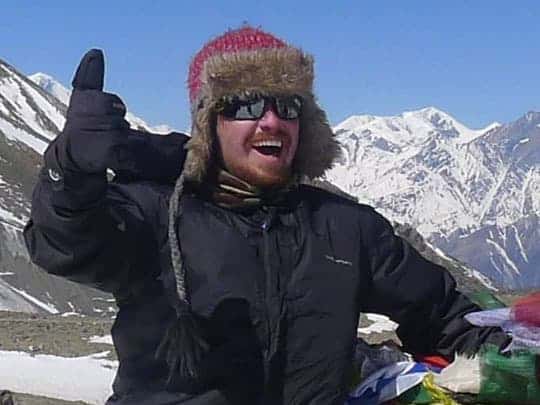 In a hostel in Penang I met a 70 year old Californian who had been ‘on the road’ for 40 years and there was no sign he was about to cease roaming any time soon! He goes home every now and again to save up… but always finds himself back out here again. The travel bug firmly lodged in his system. Another chap I met on the same trip, an Australian cyclist had been journeying around the world all his life, funding his trip through travel photography and giving slide show presentations of his adventure. His mission was to visit every single country in the world, which he had amazingly achieved, with the exception of just one, the impenetrable North Korea.

My personal favourite has to be a guy that one of my friends ended up on a boat with after responding to an innocuous flyer pinned to a tree. (You may have seen them…‘Sail the world’  ‘Live a sea gypsy lifestyle.’)  The sailor being a nudist Frenchman in his 60’s who had been floating around Asia for twenty years on a boat he built himself, occasionally picking up the odd tourist to fund his nomadic existence. No house, no clothes, no worries. 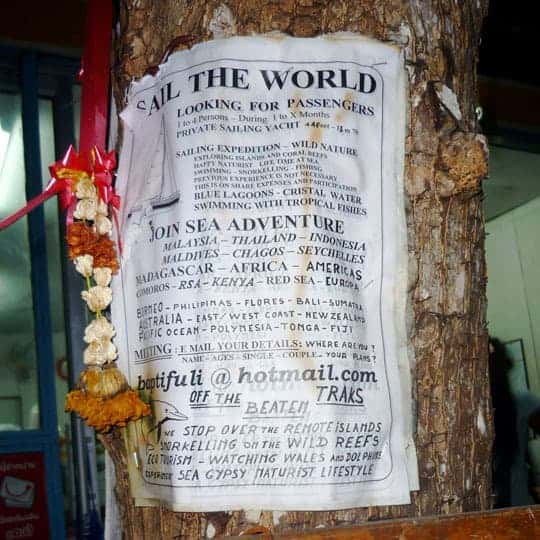 The thought of ‘settling down’ and getting a ‘real job’ is as bizarre and unnatural to these long-time backpackers as the thought of endless roving is to most.

And while I’m not suggesting you shed your clothes and build a boat. (Not yet anyway) what I definitely am suggesting is that maybe there exists a different way to live your life than you’d ever thought possible, a different path than the one that leads to the inevitable 9 to 5.

But hang on; you’re thinking. This all sounds very good and well, but I’ve already blown a load of money on Chang and silly tribal headgear, and that was just last night! I’m not gonna lie, filling in the ‘occupation’ space on my Visa form with the profession, ‘backpacker’ is a great buzz, but something tells me that this ‘day dream’ can’t last forever. Being a millionaire in Laos is one thing, but the truth is I’m running out of money fast!

Okay, so you have a point, and I hate to break it to you, but sadly, money doesn’t grow on coconut trees. Traditional backpacking practice is to work your guts off at home to save up for your ‘gap year’ then return once the cash has run out. Some travellers fund a few months in Asia with a stint working in Australia for example. Bar work, fruit picking and other agricultural grafting is a way to make your time out here last longer. 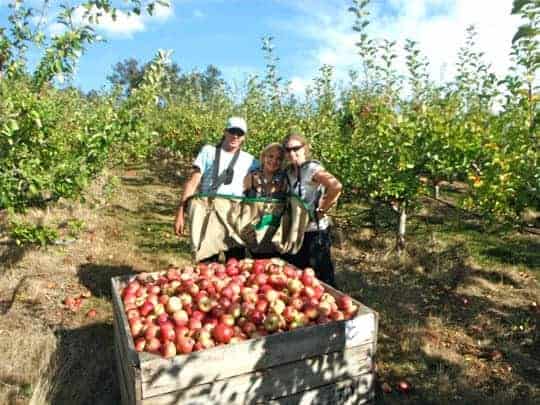 But, it is possible to earn and travel in this part of the world, and although you may not make mega bucks, the cost of living is considerably less in Asia, so your pocket money goes a lot further, and the lifestyle could be more rewarding than you ever thought.

Probably one of the most popular ways to fund your travelling is to get yourself a job teaching English. Young enthusiastic students eager to learn will make your working day seem less work, more play. I’ve met tons of travelers in all different parts of South East Asia; Hanoi, Bangkok, Ho Chi Minh City, Chiang Mai, Pnomh Penh. It’s usually the bigger cities that give the best pay and have the biggest expat communities that are easy to integrate into, but there are opportunities out in the countryside too, where you’ll earn less but very often the cost of living can be dirt cheap. Most jobs require some kind of teaching qualification, (which can be taken out here) TEFL or CELTA being the most highly regarded. 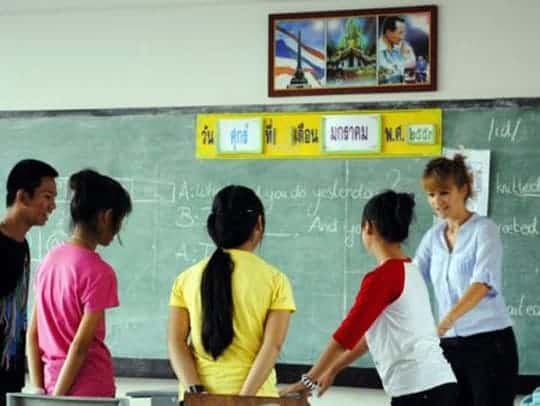 The beauty of teaching is that it won’t drain all of your time. You can use your weekends and holidays to try new things, explore your creativity, invest time in hobbies, learn to play the ukulele perhaps, and most importantly… explore the country of your choice and immerse yourself in a different culture.

Other than teaching, depending on your skills and interests, there are adventure companies that employ foreigners as guides or instructors, from rock climbing to yoga schools. If you have a passion for the chosen activity, you’ll be one of the lucky few to have ‘a doing something you love and getting paid for it job.’ One of the most evident of these being a dive instructor. Tales abound of backpackers learning to dive for the first time, getting the bug and months, years, decades later they’re in the same place still living the dream, many with businesses of their own. Koh Tao must have some kind of magnetic rock that ensures no one can leave after doing their PADI course.

And then, there are the people you meet out here who are doing things well, just a bit different. Entrepreneurs, freelance writers, photographers, artists, TV producers, folks setting up meditation schools, wakeboarding schools, trapeze schools! I’ve met people starting their own charities, making documentaries or just making a living blogging about their trip! Not bad eh. Since I’ve been travelling and living in South East Asia, I’ve met so many interesting people who just seem to have an attitude to want to give it a go! (Whatever it may be) It makes you realise what an exciting place this is and how much opportunity exists here for the open minded individual.

As backpacking numbers increase despite the drop in tourism, it seems to me that many young people today, (me included), are leaving home in search of something different, see if there is anything else, tick off all the boxes and ultimately make sure they’re not going to miss anything before resigning themselves to a ‘conventional’ life.

I once heard a quote that said; “the only problem with the rat race is that even if you win, you’re still a rat.” With the recent global meltdown, hitting the West harder than the East, it seems that the lifestyle of the ‘rat’ and indeed ‘Western society’ have been placed into question. To the office worker who hates his job and toils at his desk every day of his life to get a 2-week holiday in the same destination as the fisherman works every day of his, it begs the question what are we working for?