Your mother would go mad! Staying on people’s couches that you’ve never met – sounds like trouble! But for many savvy travellers, ‘Couchsurfing’ is a phenomena that is turning backpacking upside down.

If you haven’t heard about it yet, Couchsurfing is an online community where you can sign up, create a profile and contact people to stay on their sofa for free! The idea is that you would return the favour for them if needed – or pass the favour onto another member of the Counchsurfing crew. So what’s the catch? Is Couchsurfing as easy and as fun as some smug travellers claim? Travel writer Mark Wiens discovered that Couchsurfing really is a way that you can travel cheaply, make friends with locals and have authentic travel experiences that hostel junkies can only dream of…

Have you tried Couchsurfing yet?

It was in South America in 2008 when I first heard of this genius idea of making a connection through a website called CouchSurfing.org and sleeping on someone’s random couch for free. My budget was pretty tight and my biggest daily expense was none other than spending the night. What I initially thought of as a “free place to stay” turned into a much more valuable set of travel experiences…

My rapid traveling schedule and lack of organized planning made it next to impossible to make online contacts, and my first attempt at couchsurfing failed on my part. I decided that down the road, I would give it another try…

Couchsurfing in Malaysia: A luxury condo in KL!

When I arrived in South East Asia in March of 2009, I was determined to give couchsurfing another shot with a full intent of making it truly happen this time. I was on a flexible schedule and had time to organize and make contacts. About 30 minutes of couch searching and I had contacted 3 or 4 decent looking profiles to find a place to crash. I encouragingly received a number of replies and a few days later, I was hanging out in disbelief at a condo in Kuala Lumpur, Malaysia overlooking the famous Petronas Towers. With a flexible attitude and a friendly nature, my host graciously allowed me to stay for a few weeks before I flew out to Indonesia.

A shaky start in Indonesia:

Before I left, I contacted a few couchsurfers in Yogyakarta, Indonesia, set everything up to stay with a host, and received all the information (email, telephone number) I needed to get in touch. When I arrived, I got to a pay phone to call my host, dialed, but didn’t get through. I called a few more times, each time receiving the dreaded “this number in not valid,” message (I think) in Bahasa. No problem, I thought, “maybe she is at work and can’t pick up her phone right now, I’ll walk around and get in touch later.” A couple more attempts… failed. Not a big problem, I checked into a cheap Indonesian guest house for the night. Before sleeping, I wrote a quick email saying I couldn’t get through and I had just checked into a guest house, (misspelling the name of my guest house by accident).

The next day was filled with big plans of climbing Mt. Merapi so I left at about 2 am to await the rising sun on the summit.  I returned back to my guest house in the morning to collapse for a few hours of rest.

“Boom, boom, boom,” on my door, awakened me in my drowsy daytime slumber and I wondered if I was dreaming or if it was reality. I sprang out of bed to see a completely random guy, whom I had never ever seen in my life. “Are you Mark?” from couchsurfing? “Yah, I’m Mark, what’s going on?” “I’m a friend of your host, she sent me to search for you, but it took a little while because you misspelled the name of the guest house!” She told me to tell you, “I’m soooo sorry, I accidentally wrote you the wrong phone number in the email…check out of your hotel now!” 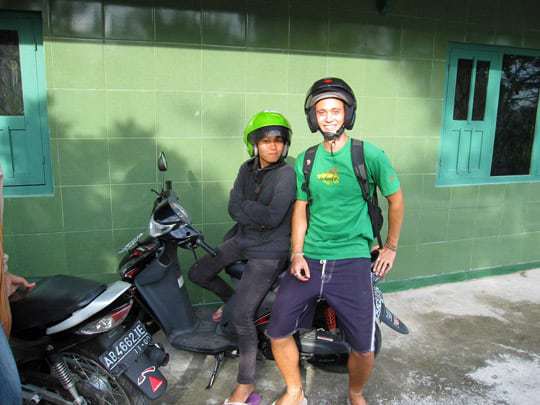 From that point on, things turned into a full on incredible Indonesian cultural immersion with my host and the rest of Yogyakarta couchsurfing community. I was passenger on the back of a motorcycle zipping from place to place, hanging out with locals and eating the finest delicacies in Yogyakarta (you have got to try the “hot plate” restaurant). I was able to do all kinds of activities unheard of by tourists, like catching fish from the pond for dinner, trekking through an abandoned cave in the middle of nowhere and seeing ancient temples, hidden from the world. 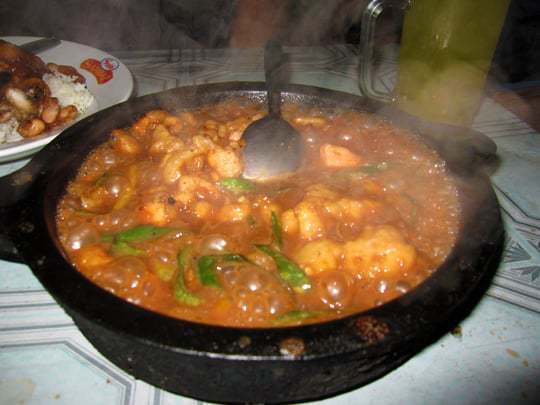 A delicious meal at the Hot Plate Restaurant in Yogyakarta with my couchsurfing hosts.

My new friends were equally excited to practice their English and ask me questions about the world outside of Indonesia and what I thought of their country. I was happy to speak with them, answer their questions, and simply tag along to get an insight into their daily lives. 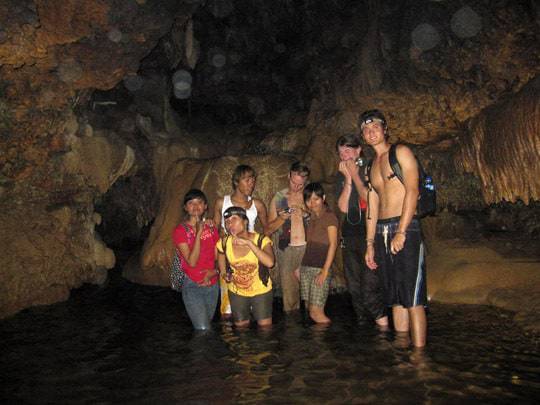 Exploring secret caves off the tourist track in Yogyakarta.

What was going to be 2 days, turned into 1 week (and would have been longer if my visa hadn’t run out!).  Instead of living the normal backpacker routine and hanging out at the places frequented entirely by foreigners, I was introduced to the real side of Yogyakarta.  This couchsurfing experience opened my eyes to a new way of traveling, with a raised level of personal interaction and cultural immersion.

Couchsurfing is now a vital resource for all my trips to new countries so I can quickly get the inside scoop, learn things and get internal advice.

Hope you have the opportunity to make couchsurfing a part of your travels too!

Mark is a world traveller and a blogger currently living in Bangkok. He’s also durian smuggler, spicy food conoisseur and a buffet finisher! You can find out more about Mark’s food adventures at www.eatingthaifood.com and www.migrationology.com