Skip to content
Burma, or Myanmar, the land of Aung San Suu Kyi, is a country little visited by the world; however after just recently opening it’s doors there is a new surge of travellers pouring in! The influx in tourism is so great that accommodation is hard to come by and prices are increasing greatly. The word on the ground is that new resorts and hotels are scrambling to serve travellers to Myanmar and the country is set to change rapidly… But for now, Burma is an extremely special country for the adventurous spirit because there is still a chance you will get to see something no traveller has seen before, an inside view of history being written. In this blog, Andres Nunez del Prado, a Peruvian travel writer and photographer, tells us the in’s and out’s of his recent 7-day trip to Burma. If you don’t have much time to explore this fascinating country, this blog should give you some tips of how to make the most of your trip.

The Whirlwind Trip: 7 days in Burma! 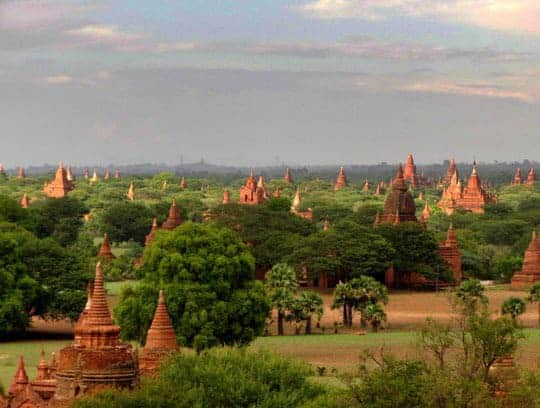 The glorious ruins of Bagan.

We arrived in Yangon on an Air Asia flight, at around 8.30am (US$100 roundtrip from Bangkok). We had a couple of 100 bills of USD and a lot of Thai baht (THB). Before going we looked for information about changing THB into Kyats (MMK) in Yangon. Nobody seemed to know so we decided to just go for it; after all we thought ‘It’s a neighbor country so they must change THB somewhere in town’! Actually we were not wrong, once we arrived in Yangon we started asking around and we found the popular Bogyoke Aung San Market. Here you can change USD and THB easily. After a good bargain we got a good exchange rate: 31 MMK for 1 THB. After everything was settled we felt like we could now start the trip! As we only had seven days to explore the country, we decided to spend only one day in Yangon and take the night bus to Bagan (15000 MMK). After changing the money we went straight to the Shwedagon Pagoda, a golden temple that is a national treasure and the location of the first historical speech of Aung San Suu Kyi. There is an entrance fee of 5 USD per person. 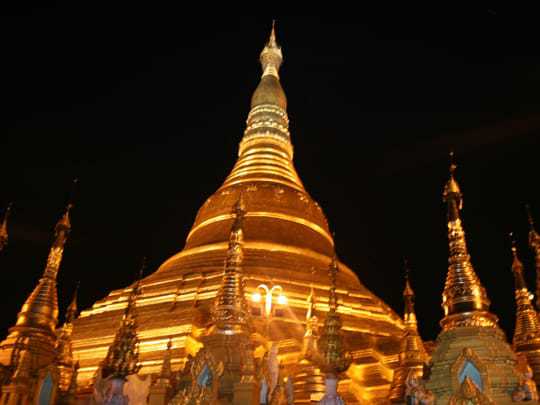 Garden and Okinawa are two cheap guesthouses around the central Sule Pagoda and the city hall. Both of them charge 5 USD per bed and 2 USD if you only want to use the shower!

Day 2 – Arriving in Bagan & finding the best temple to watch the sunset!

After a 10 hour bus, pretty uncomfortable but bearable, we arrived in Bagan at 4am. There were many horse cars waiting for tourists and charging 5000 MMK to Winner Guesthouse (18 USD double room). Later that day we found that there were other guesthouses costing 13USD for a double room, but at 4am we were pretty tired so we took the first option. Sunrise is around 5.15am and there is an option to watch it over the temples, a horse car there will cost 5000 MMK. 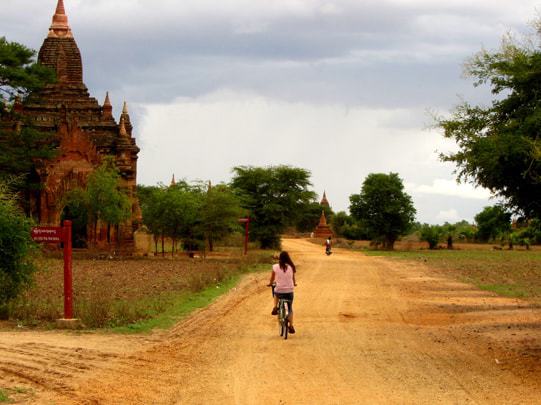 Cycling around the temples is the best way to explore!

Bagan is absolutely amazing, and is a must see in Burma. The best thing to do is to rent a bicycle and check out the thousand temples and pagodas by yourselves. All of them are spread out over a 42 sq km plain, with just a few being close to both roads, making pagoda hunting in the wild a fabulous activity. Certainly there will be a moment just for you and the Buddhist spirit. Entrance to Bagan costs 10 USD per person. The best place to be at sunset is the Shwesandaw Pagoda because you can climb it, Chichen Itza style. 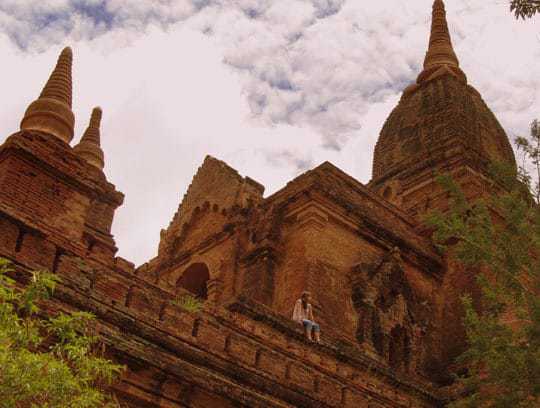 Waiting at the top of the temple: one of the best places to take in a sunset!

If you have only two days inBagan, the second day you can choose between Mount Popa or renting a bicycle to visit the market. We chose to go to Mount Popa, and arranged everything with our guesthouse (10000 MMK). Actually Mount Popa is a volcano, but it has a huge magma rock in front of it, and on the top you will find the Taung Kalat Temple. It takes 777 stairs and some monkey feeding to get to the top where amazing views await… That night we took another night bus for Kalaw (11000 MMK).

Day 4 – Arriving in Kalaw & starting the trek to Inle Lake

We were expecting to arrive in Kalaw around 4am but we arrived at around 1.30am! The bus left us in the middle of the main road, where there are lots of hotels. We chose Golden Lily Guesthouse (7 USD double room) because they also offered support in arranging our trek to Inle Lake. You can do the trek in two, three or four days, the most popular being three and two days. The price depends on how many people are with you, we were three and it cost us 38,000 MMK per person for the two day trek, including pick-up, food, accommodation and the boat trip on Inle Lake. Once you start walking you are lost in time, stunning landscapes and smiling Burmese locals await. The path is surrounded by water buffalos and different kinds of plantations. The trek has two parts; the first one is a two and a half hours walk followed by a Burmese lunch in a little village, the second one is a four hour walk ending at a Buddhist temple, where you spend the night with some other trekkers. If you are doing the trek during the monsoon season (May – September) don’t forget to bring a rain coat and a rain cover for your backpack, we were hit by heavy rain for almost two hours.

Kalaw: Where water buffalo are more common than cars.

After a nice pancake breakfast we started the second and last day of trekking. It took five hours to reach Inle Lake and almost everything was downhill.Once we reached one of the towns surrounding the lake we had a break and a nice lunch. After that we boarded our long canoe style boat and enjoyed the hour and a half ride through the lake to Nyaungshwe Township, where the trek finishes. Nyaungshwe town is quite small but also quite popular with tourists, you will find a wide range of hotels and guesthouses and good places to eat offering Western, Chinese and Burmese food. We stayed at Gypsy Inn close to the port (10 USD for a double room). 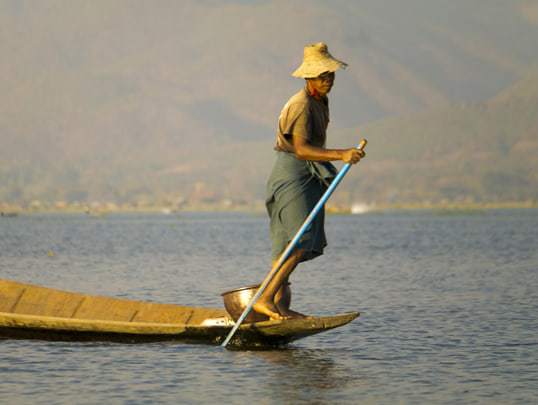 Day 6 – The local bus & the local villages inbetween (the highlight!)

After five days of visiting more touristy places in Burma we decided it was time to get an inside view of the country and its people, as our flight was from Yangon we had two options: staying one more night on Inle lake and taking the night bus to Yangon (22000 MMK) the next day, or taking the local buses where we could stop in the small cities in-between. We went for the second option. First we took a pick-up to Shwenyaung (1000 MMK, 25min), and then we took another pick-up to Kalaw (2000 MMK, 2 hours). This part I especially liked, it took us into small markets and towns, and we shared the “passenger room” with 35 peanut oil gallons, some Buddhist nuns and an ex-government worker. Once in Kalaw we headed into the train station. The train has two classes: ordinary 2 USD and upper 5 USD. As a tourist you must take the upper class. The ride takes six hours and the train goes really slow, also the tracks are not in the best shape which creates a somewhat shaky ride. Regardless, the ride is really beautiful as you get to share the train with locals and go through tiny villages in the middle of the mountains and eventually into the gorgeous plains… 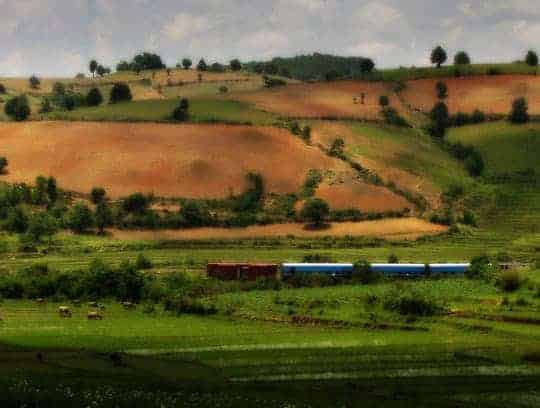 The ride to Kalaw may be shaky, but with scenery like this who would even notice!

We arrived at Thazi at 9pm, the town was dead, nobody was on the streets and only a couple of military trucks roamed the city. Later we found out that the country was supposed to be in curfew because of the recent fights between Buddhists and Muslims. We checked out two guesthouses: Moonlight 20 USD double with AC or 12 USD double without AC, and Wonderfull (government owned) 20 USD deluxe double or 10 USD standard double, both with AC. 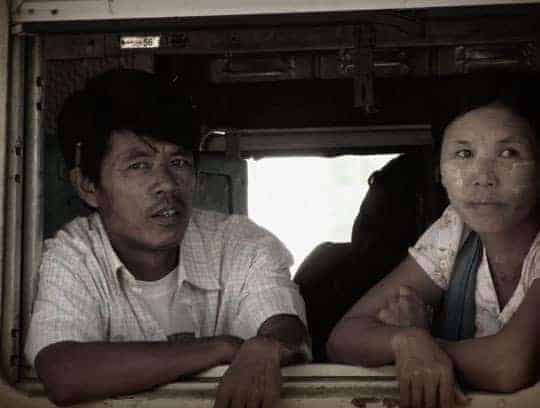 The train offers a great glimpse into a less touristy side of Burma.

Thazi is a small town, not a tourist destination, the streets are small and taxis are horse cars, houses are made of bamboo and straw, the food is cheap and well made. In conclusion, Thazi is a nice place to glimpse a more authentic view of Burmese life.

Smiling locals in Thazi: a small town unfrequented by travellers.

We went for breakfast in a small and unnamed restaurant in the middle of the main road, just a few meters left of Moonlight Guesthouse. The moment we sat, people from the next table were bringing as food and drinks, they were saying Ming la ba (hello in Burmese), and making us try this and that. We had a huge breakfast that only cost 1000 MMK for both of us. After saying goodbye to the friendly locals we took a pick-up and head to Meiktila (2000 MMK, 30 min). Once in Meiktila we tried to hitchhike south, but as we should have known, hitchhiking is not allowed in Burma (and neither is couchsurfing!), so we had to take a bus to Nay Pyi Taw (the new – deserted and very strange – official capital of Myanmar) (1000 MMK, 3 hours). The bus from Nay Pyi Taw to Yangon was 10 USD for both and took 6 hours. We arrived in Yangon at around 10pm; our flight was schedule to depart at 8.15am the next morning so we only had time to find a place to sleep near the airport because the city center was far away. We ended up looking for a guesthouse for one hour, we found many but none of them would take foreigners. There is only one “cheap” hotel near the airport, it is called Airport Inn and is government owned, the double room starts from 50 USD.We decided to go to the airport and spend the night there. Some friendly people helped us find the most comfortable place to sleep and we settled in for the night.

The night in the airport was good enough, it is supposed to be forbidden and the airport closes at 12pm but this time they let us stay. I think a bit because of the crazy rain and also because our very helpful taxi driver worked his magic! At 8am we boarded our flight and finished our trip in Burma – what an incredible 7 days!

About the author: Andres Nunez del Prado is a Peruvian native who set out last year to travel the world. Starting in Egypt he is now on the latter part of his trip, finishing things up in South East Asia. To peruse more of his stunning photography check out his collection here. 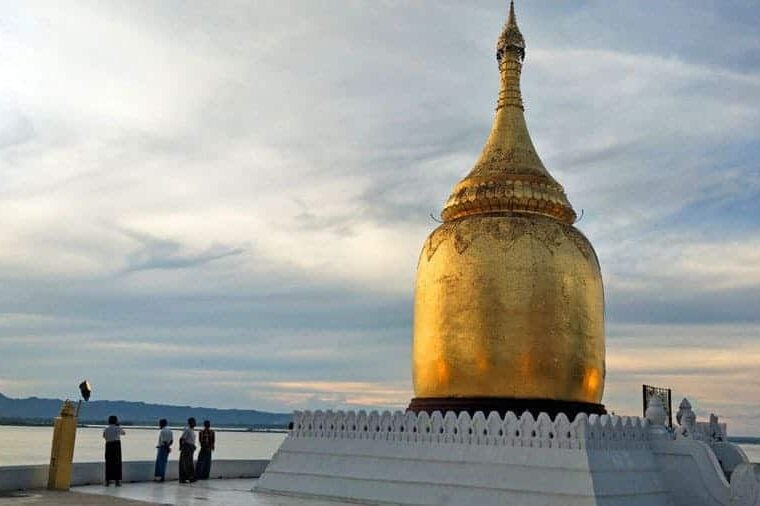