The former ruin of Le Bokor Palace Hotel was recently bought by Sokha Hotels and Resorts, completely renovated and is now open as a resort as this article in the Khmer Times explains. You can now even book a stay in the revamped colonial hotel on Booking.com, only it will set you back over $500 US/night! Just goes to show that places in Southeast Asia change fast and you have to visit them while you can!

When visiting Cambodia there is a well-trodden path of historical sites: lines of tourists tentatively explore the barren corridors of Tuol Sleng Torture Museum and amble timidly around the Killing Fields, groups jostle for the best view of Angkor Wat’s imposing silhouette as it is illuminated by sunrise and queue for photographs alongside the weathered stones of Ta Phrom.

If you are looking for a route less worn by the burgeoning tourism industry, for a site refreshingly free from tour operators and entrance fees, look no further than Bokor Hill Station! 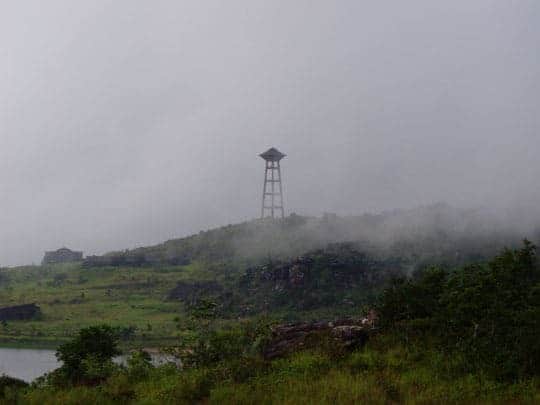 The skeleton of what was once Bokor Hill Station is spread across the undulating terrain of a Cambodian mountaintop, its various buildings nestled amongst thick, lush grasses and shrouded in rain-heavy cloud.

The station was built in the 1920s by the French, designed to provide the colonisers with a sanctuary from the scorching temperatures and perceived insalubrities of lowland Cambodia. Complete with a post office, church, palace hotel and casino, it was an oasis of western decadence for maladjusted European settlers.

However, less than thirty years later, at the close of World War II when the French began their retreat from Asia, the colonial town gradually became obsolete.

It was abandoned for good in the 1970s as the surrounding lands became swept up in the revolution, and for the next decade, Bokor was a battleground, embroiled in the fierce and unforgiving guerrilla fighting between the Khmer Rouge and Vietnamese. Once a hive of upper-class elegance and colonial pomp, now only a war-torn shell remains, left poignantly untouched.

When I arrived in the sleepy, riverside town of Kampot, situated a stones throw away from the beachside city of Kep, I primarily wanted to relax and unwind. Having spent the obligatory few days touring sites of genocide in Phnom Penh, I needed some headspace.

My main reason for deciding to join a trip to Bokor Hill Station, which consisted of a two-hour trek to and from, was the appealing prospect of some exercise rather than visiting a site of historical interest. 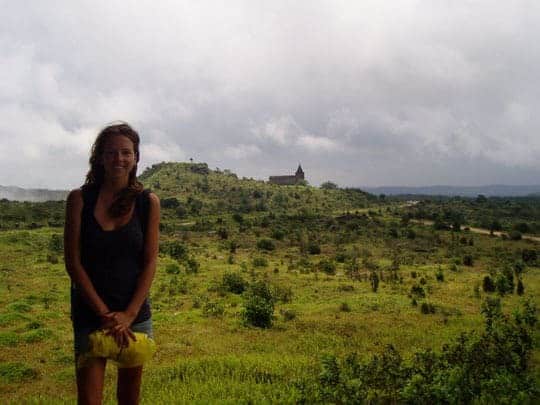 The trek certainly did not disappoint. Our guide, an ex-guerrilla fighter, seemed to bound effortlessly upwards, but for the rest of us ,it was a tough, sweaty slog to reach the 3540ft peak. More accustomed to plodding along the well-maintained, well-worn tracks of North Wales, this unforgiving scramble through the jungle was a muscle-burning challenge.

However, despite roasting under a thick canopy of forest, struggling up near vertical inclines and grasping makeshift wooden handrails alive with ants, it was a challenge I enjoyed. Our group of six, a scratched and sweaty mess, eventually emerged through an opening in the undergrowth onto a road, where a jeep was waiting to drive us the remaining distance to the hill station.

Gulping in the revitalising temperance of the mountain air and relishing in the cloud cover we trundled across the mountain for about half a mile. The entrance to the station was refreshingly understated: no entrance fees, no information signs and no tour operators. In fact, I hardly noticed we had arrived. 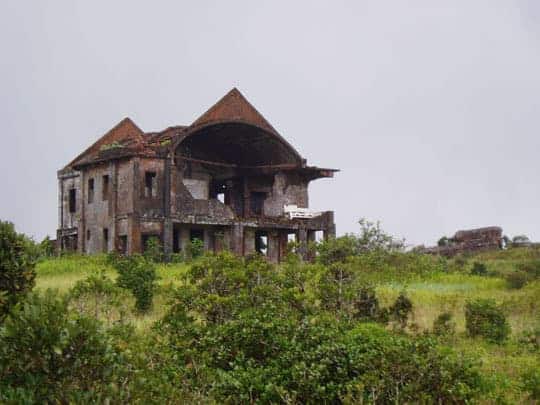 We pulled up outside a small ranger station and sat on the steps for lunch, surveying the remnants of the old colonial town: the crumbling stones were half submerged in the hillocks of the mountaintop, protruding sadly through a veil of rainy mist.

Whilst eating, our guide told us his story: his parents were killed in 1977 by the Khmer Rouge, following which he hid in the mountains that surround Bokor, surviving alone for two years. He was then discovered, recruited by the North Vietnamese and forced to fight the Khmer Rouge.

Listening to his tale it was hard to comprehend that on the same terrain that he once fought for his life in a bloody battle, he now casually leads small groups of backpackers.

We were given an hour left to our own devices, free to explore the eerie ghost town. I roamed around the crumpled buildings slowly, trying to guess the previous function of each rubble-strewn, bullet-peppered ruin and to imagine what histories those stones must have witnessed. The palace, unmistakably the centrepiece of the town, is set apart from the rest of the debris.

Though now only a weathered shadow of its former self, the structure still resonates with imposing grandeur and has an aura of long-lost splendour.

The entrance opens directly onto what must have been a ballroom: a lofty, arched ceiling, elegantly curved bay windows and a majestic fireplace that faces a spacious dance floor.

Standing on the cracked and chipped tiles, which were covered in a thick carpet of dust, I merely had to close my eyes to picture the French aristocracy circling with wine glasses and canapés.

From the ballroom, I ventured to the guestrooms, the balconies, the roof and the kitchens: no room was out of bounds. Exploring the cavernous insides of the decaying palace felt like walking through history itself – a site moulded only by the past and not yet sanitised by tourism.

As the time came for us to leave, the prospect of coaxing shaky, aching legs down some 3000ft of rocky, unstable mountainside was unappealing , to say the least.

Unfortunately, the option of a jeep ride to sea level was out of the question: the site has been loaned to a Chinese company and under the guise of health and safety, tourists are not permitted to use the road leading up to Bokor – a restriction more likely to be due to the somewhat furtive redevelopments taking place.

Rumours abound that they are planning to repair the old hotel and to develop a modern casino and restaurant complex. If so, it may be that the histories embedded in the shell of what was Bokor Hill Station will soon be lost to commercial growth – a very sad prospect.

21 thoughts on “The Renovation of Bokor Hill Station, Cambodia: How to Ruin a Ruin!”