Once upon a time, I lived in Vietnam’s crazy capital city, Hanoi. Every day I nonchalantly risked my life by clambering onto the back of a battered Little Cub scooter and weaving my way through crowds of beeping, speeding motorbikes to work. I vividly remember the soupy humid heat and the smell of exhaust fumes, spices and rotting rubbish filtering through my face mask.

I can still see the thick chords of tangled electrical wires strung above the streets and the clusters of people sat on tiny stools on the pavements, eating steaming bowls of early-morning Pho. In fact, I still have a purple scar on my knee from when my bike crashed and a group of Vietnamese women rushed over to pick gravel out of my road rash and bandage my bleeding leg.

I spent my days teaching English in local schools. The classrooms were swelteringly hot and crammed with fifty or more boisterous Vietnamese kids who’d dance on tabletops, gleefully greet me with shouts of ‘Hello Teacha!’, and both frustrate and amuse me on a daily basis.

I lived near the Old Quarter of the city and would spend hours wandering the maze-like streets full of crumbling, pastel-coloured colonial buildings. I sipped passion fruit shakes with friends in cafes, got five dollar foot massages and watched locals take part in mass aerobics classes by Hoan Kiem Lake. At night I’d listen to the bats and rats running riot in the attic above my apartment.

Remembering all this as I look out the window on a grey winter’s day in London, I ask myself: Was that really my life? It seems so unreal now, that chaotic place I loved and sometimes hated, yet am proud to have called home. Hanoi is a city where you can almost be run over by a speeding motorbike one minute, then helped across the road by an old, pyjama-clad Vietnamese woman the next.

When I lived there I relished buying mangos and eggs from the early-morning market on Tran Phu Street, but I’d have to fish lumps of beef out of my (supposedly) vegetarian soup and avert my eyes every time I spotted a dog roasting on a spit by the roadside.

As much as I loved Hanoi the thing that saved me from totally losing my mind when I lived there was being able to escape the intensity of city life during the school holidays and find some peace for a few days in the surrounding countryside. Whether you’re living there or using it as a base to explore Northern Vietnam, here are my favourite Hanoi getaways….

Catching a bus in Vietnam is always a noisy experience and the trip to Mai Chau was no exception; for four solid hours I was blasted with high-volume dance music as we bounced along. The journey was worth it for the view from the balcony of my wooden bungalow; fields of lime-green rice stretched far into the distance, bordered by hulking mountains. Hanoi’s soundtrack of beeping horns and traffic was replaced by the buzz of cicadas and the voices of children playing nearby.

I chose to stay in Ban Lac Hai, one of three small villages situated a few kilometres away from Mai Chau itself, which is a non-descript town famous for its surrounding scenery.  The people in Ban Lac Hai are of Thai ancestry, they live in traditional wooden stilt houses and make a living from farming, running homestays and selling handicrafts to tourists. In the village, children play beside the dusty dirt roads and women sit in shops selling hand-woven scarves, brightly-coloured bracelets and wooden figurines while cattle graze in nearby fields and farmers in conical hats stoop to collect crops.  I spent much of my time on a creaky bike, cycling along windy roads through the fields and nearby villages, then reading in the shade of my balcony.

One evening, the owner of my guesthouse took me for entertainment at a nearby lodge. I ate a meal of rice, vegetables and northern-Vietnamese spring rolls; a mix of spiced egg and vegetables encased in wafer-thin pastry – the one food I really miss from my time in Vietnam. After dinner I watched traditional Thai dances, tasted homemade rice wine and marvelled at the stars in the smog-free sky. Back in Ban Lac Hai, a festival was in full swing on the village green; teenagers danced frantically around blazing bonfires, there were watermelon-eating competitions and karaoke sessions that lasted late into the night.

How to get there: take a four-hour bus journey from My Dinh station in Hanoi.

Cuc Phuong is Vietnam’s oldest national park and one of the country’s least-frequented attractions. There was a festive atmosphere on the bus to the park as passengers from Hanoi, loaded with gifts and food, made their way back to their home villages to stay with family for the TET New Year, the most important holiday in Vietnam. Out the window, people whizzed past us with traditional peach blossom trees, which are decorated with envelopes of ‘lucky money’ during TET, strapped to the back of their motorbikes.

Vietnam isn’t known for its wildlife conservation and certain native animals, like the scaled anteater-type creatures called Pangolins, have been poached to near extinction. Cuc Phuong however, acts as a sanctuary for the 135 species of mammals that live in the park, including rare clouded leopards and Asian Black Bears. I visited the park’s Endangered Primate Rescue Centre and Turtle Conservation Centre, most of the animals I saw had been rescued from poachers attempting to smuggle them to China for use in traditional ‘medicines’.

From my bungalow overlooking Mac Lake, I was surrounded by 22,000 hectares of dense rainforest and the grey spikes of two mountain ranges towered on all sides, reflected on the water’s surface. At night, fireflies lit a blue-white path around the lake, frogs chirped and wildlife rustled in the thick of the jungle. A friendly black dog belonging to the family who ran the restaurant trotted alongside me when I went out for long bike rides and trekked along trails past ancient caves, waterfalls and thousand-year-old trees.

How to get there: buses take two to three hours from Giap Bat bus station in Hanoi.

This touristy mountain town in the far north of the country, near the border of China, is my favourite Hanoi getaway.  Sapa’s cool alpine air comes as a welcome relief from the sticky humidity of Hanoi and I loved throwing open my hotel window to gaze out at the never-ending rice terraces and cloud-topped mountains. During my two visits to the town, I spent hours drinking pots of tea in cafes perched on the edge of cliffs, gorged on a selection of cheeses (a rare treat in Vietnam) in the expat-run Hill Station restaurant and enjoyed massages and evening performances on the town’s open-air stage. 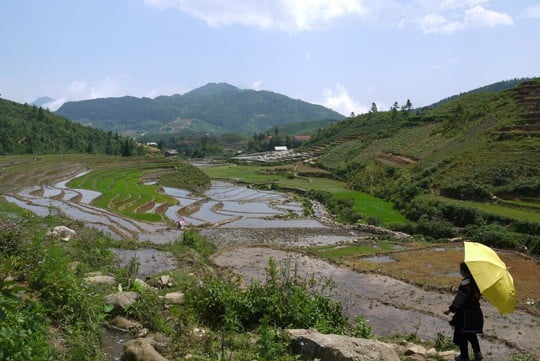 Trekking is the main activity in Sapa and I hired a guide through the Sapa O’Chau organisation, a social enterprise which employs local people and puts money back into education and the community. My guide was Lam, a 22-year-old woman from the nearby Lao Chai village who also sells handicrafts, helps to farm the land and speaks excellent English. Lam led me along spiralling paths through the lush countryside, across steep staircases of rice and through Ta Phin, the largest village surrounding Sapa which is made up of over 2,000 members of the Red Dao and H’mong groups.

How to get there: take an eight-hour overnight train from Ga Hanoi to Lao Cai station followed by an hour-long minivan ride to Sapa. Alternatively, the Sapa Express bus from Ly Thai To in Hanoi takes around five and a half hours.

With its paper-flat waters punctuated by limestone karsts, sandy islands, floating villages and vast caves, it’s not hard to see why Ha Long Bay is one of the most famous tourist attractions in Vietnam. The UNESCO World Heritage Site lies just 170 kilometres from Hanoi, so there are dozens of overnight package trips, of varying quality, available to book through travel agents.

In shady Vietnamese-style, I found myself on the Dragon Pearl (with a missing P) ship, when I’d actually booked the slightly nicer-looking Dugong Sails; a chat with other guests revealed that we’d all paid varying amounts for the same trip. Watching the sun set in shades of melting butter over the bay from the top deck of the boat certainly made up for the dodgy dealings though. My favourite part of the trip was an early-morning kayak around a floating village while giant eagles circled overhead and residents went about their business, loading boats and relaxing on bobbing platforms. 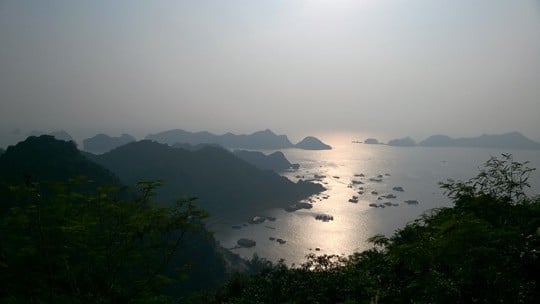 On a separate trip I stayed on Cat Ba island in Ha Long Bay and rented a motorbike to explore. I went trekking in the Island’s national park and wandered around the eerie, bunker-like, underground rooms in Hospital Cave, which was used as a bomb shelter and medical centre during the American war. After stopping at several wide, sandy beaches I whizzed up to the French Fort, a crumbling building once used to defend the island from sea invaders. From the hill-top, late-afternoon sunlight glinted off the still waters of Ha Long Bay, which stretched off towards the horizon.

How to get there: buses go to Cat Ba from Luong Yen bus station in Hanoi, this takes four and a half hours and the ticket includes boat transfer. The easiest way to visit Ha Long Bay is to book a trip from a tour agent in Hanoi; you can travel there independently by taking a four-hour bus journey to Bai Chay from My Dinh bus station, then a motorbike taxi to the wharf.

Tam Coc lies just two hours south of Hanoi and is often referred to as Ha Long Bay on land, since the landscape is full of similar imposing limestone elevations, which you can view by taking a boat ride down snaking rivers surrounded by floating fields of rice. My trip highlight was a 90-minute scenic boat ride; the driver cut a smooth path through the water, paddling effortlessly with the soles of her feet as we passed fisherman in row-boats and people wading through the water, gathering shrimp. Green-yellow swaths of rice sprouted from the water’s edges, stretching out to meet the jagged edges of limestone outcrops. We sailed through the dark mouths of the three stone grottos which Tam Coc is named after. 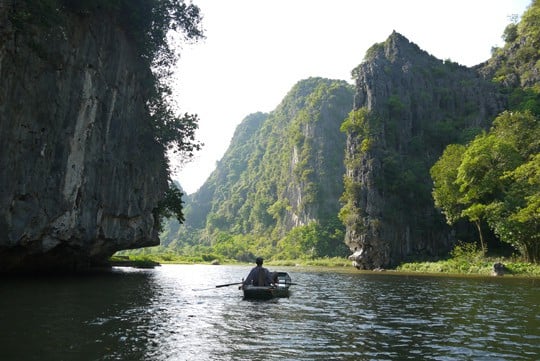 Exploring the area by motorbike, I visited Bich Dong Pagoda, which has two temples perched on a cliff and a colourful, carved entrance arch. Just 22 kilometres away near the ancient city of Hoa Lu, I spent hours wandering around Ba Dinh, the largest complex of Buddhist temples in Vietnam. My favourite spot was Bird Valley, a park full of tree-covered trails which lead you past ancient Banyan trees, through pineapple fields and primeval forests to secret caves. I watched birds swoop above a huge lake and took a boat ride through Buddha cave, so-called because the rock formations inside resemble Buddhas.

How to get there: take a two-hour bus journey from Giap Bat bus station in Hanoi to Ninh Binh; you can take a taxi the final seven kilometres to Tam Coc. 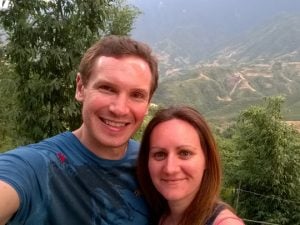 About the author: Amy Blyth left the UK with her partner Andrew to travel the world in 2013. Since then, the couple have been travelling, working and volunteering their way around Australia, New Zealand, the USA and South-East Asia. Amy spent nine months teaching English to children in Hanoi, Vietnam and writes about her adventures on her blog: Ourbigfattraveladventure.com. The couple are just about to move to Madrid, Spain, to teach English.