This time in Chiang Mai was not indulgence, I realised – it was necessity.

I’d come to improve my health by attending Fruit Winter, a free festival of daily meet-ups and activities with dozens of inspired and inspiring folks from around the world, held there for the past two Januaries. 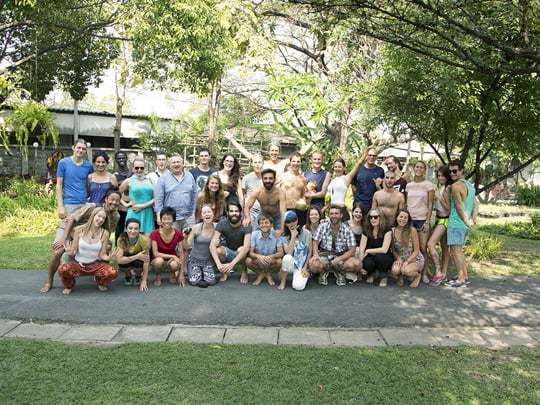 Chiang Mai proves a great venue with its laid-back atmosphere and warm welcome for tourists, along with many great restaurants that cater to vegans and vegetarians. It’s also one of the few cities in Thailand that can still boast much of its enclosing city walls, and even a moat, which afford a great sense of being at the centre of it all – not a centre for business and power as in less fortunate cities, but a centre for pleasure, a centre for lazily winding down wandering lanes, temple to temple, café to café, bar to bar.

Unlike larger cities where corporates reign, Chiang Mai is human-sized and human geared, a place where you can breathe a sigh of relief, and then a sigh of pleasure. 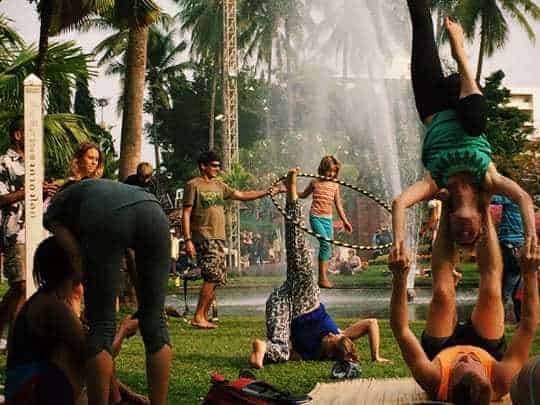 One of the main spots in the old city, of which Fruit Winter makes great use, is the idyllic Nong Buak Hard park in the south west corner (pictured above). Here, fruities bunch under leafy shade beside the lake to devour their tropical bounty, sourced usually from the huge yet unbustling Muang Mai market which, with Buddha-like calm, plies its trade from dawn till dark beside the Ping River. But here in the park, fruit power vies with the relaxed vibe to fuel some energetic displays – yoga, slacklining, juggling, music, or even an off-the-cuff talk from some renowned attendee. 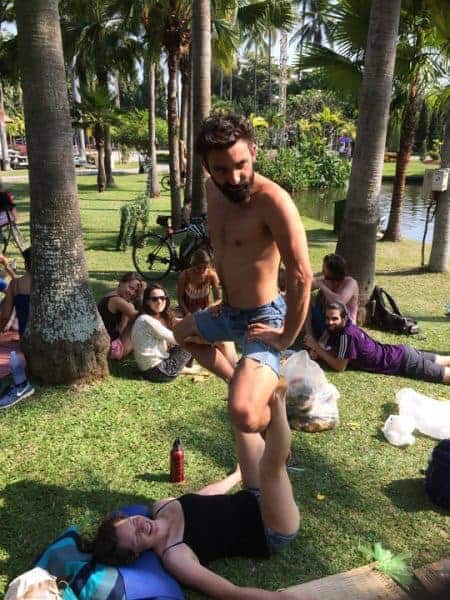 The festival is the brainchild of Handyman Bananas – a.k.a. Conor McMillen (pictured above) – a lifestyle coach and therapist from the US with a popular YouTube channel where he inspires others to follow his own path of recovery from bad habits and on to shining health. If you’re on the wrong side of this divide, still cleaving to a comfortable rut, he’s the kind of bright, upbeat and wholesome guy who can make you sick – though he’s far better at enabling wellness. It helps to know he’s been on the wrong side of that divide, too. 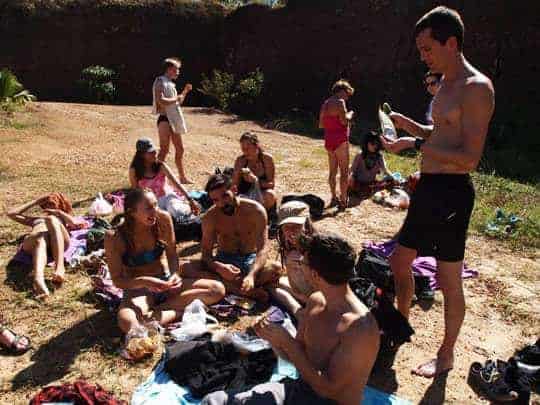 “I came to [a fruit-based vegan diet] because I needed something drastic to shift my life. I was drinking every single day. What’s most important to me now is self-understanding, self-knowledge, self-observation – all in the goal of self-worth. And fruit kind of helped me get there.

So, what I say now to people who want to change their lives is to gear them towards the self-love aspect. Don’t worry about the diet so much, the other stuff will fall into place. But for some people it does happen in a strange way. I do think it’s kind of funny that I started eating thirty bananas in a day and then eventually found ways to love myself more!”

He laughs heartily at the seeming absurdity.

There are many such stories amongst the seemingly superhumanly healthy attendees. Several have recovered from conditions like chronic fatigue – my own malaise – to regain their lives and, like Conor, launch their own online sites to smooth the path to others. The change is so profound, it seems, you want to shout it all across the web. 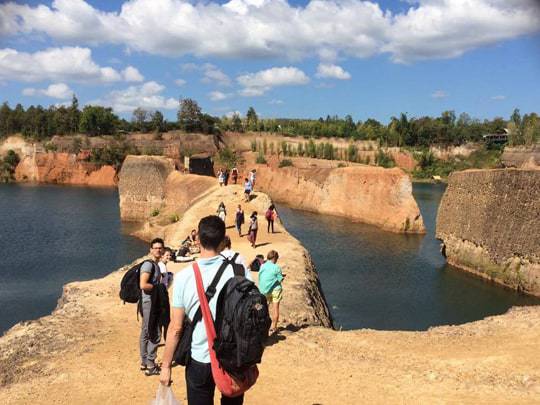 Daily excursions (see above, at a local swimming quarry) include some of the top attractions of the region, including opportunities for the fitter amongst us to demonstrate their fitness. Yet, the 80 kilometre bike ride to and from the spectacular Muang On cave system and nearby San Kamphaeng hot springs, or the testing 1,600 metre ascent of Doi Suthep, the temple-crested mountain that watches over Chiang Mai to the west, are opportunities for bonding rather than competition. Thankfully, for me at least, there is always a more sedate option, tagging along by songthaew or rented scooter.

It’s while exploring the caves that I meet Sean of the Raw Joy and Abundance YouTube channel, a Texan so enamoured of Chiang Mai he’s come to settle in for a year. He tells me of staying at the Fruit House, the special accommodation available to fee-paying attendees.

“I was one of the 30 lucky people who paid to stay at the Fruit House to experience a 24-hour community up close and personal. Sitting around and eating six papayas with friends who are doing the same is amazing. Nobody is asking where I get my protein from or criticizing me for eating healthy raw foods!

When you eat living foods, you feel alive. Something about it opens your heart and seeks out connections with others. People are seeking health and vitality, and raw living foods are the top of the mountain where these things are concerned.”

Also staying at the house was Graham, an IT consultant from Newcastle in England, who like me was also looking to steal a trick or two from the brighter younger things around us. 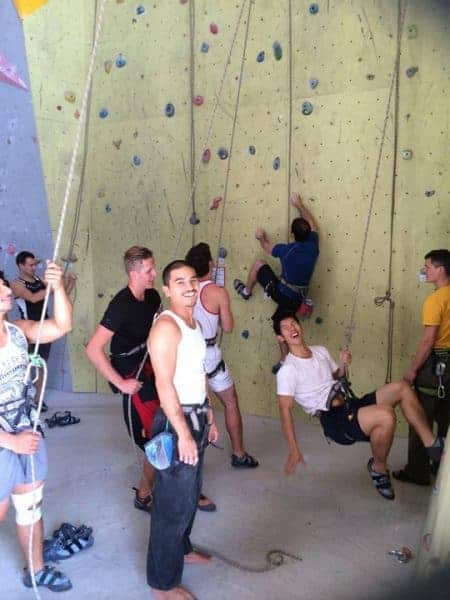 “I have met a lot of genuinely happy people following this lifestyle who once described themselves with varying degrees of depression. That is very encouraging as my primary motivation for all of this is an unhappy and unsettled mind.

I wanted to be in the heart of Fruit Winter but did have massive reservations about sharing accommodation. But the Fruit house was a great environment – three bungalows, a treehouse, two dorms and the main house – little groups gathering and dissipating like a small village.

Most of the events at the Fruit House were organised by a guest of Conor’s. These pushed a lot of us way out of our comfort zones and there were emotional moments. The events involved an intimate amount of connection with strangers that I’ve never even got close to with my closest friends. I would have normally run a mile but being in a different environment made me want to push the boundaries.”

The community aspect is one that Conor also stresses.

“I think [the high fruit, vegan lifestyle] is a good focus for people who want to get into a health journey. It doesn’t have to necessarily be that you attend the festival because you’re vegan or because you eat a lot of fruit. Everyone can get in on eating some bananas, or coming to Thailand and being excited about Thai mangos and durian. So, I think at this point, for me, my focus is community.” 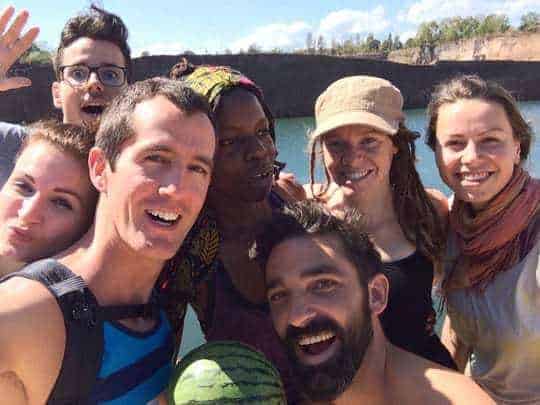 Looking ahead to next year’s festival, he says…

“We are going to eat a lot of amazing tropical fruits, but I think the big thing is that we’re all going to get to know each other in an amazing country where people are smiling and relaxed and happy, and the sun is shining.”

Fruit Winter in Chiang Mai is a habit to keep.

About the Author: Martin Higgins is a writer, editor and podcaster, based in the UK and Thailand. In 2013 he began The Eternities podcast which features Interviews with writers and thinkers on the themes of consciousness, technology and human potential. He is also the author of Human+, a novel on similar themes. For more details, or to contact, see www.martinhiggins.net.