Skip to content
Writers Will and Ellie from Tapp and Bear Travel, jump out of their hammocks and onto the river to explore the waterways surrounding The 4000 Islands! What did they get up to on this Kayaking Adventure with Green Paradise Travel?

The Highlight of Southern Laos – The 4000 Islands

The 4000 Islands (or Si Phan Don) in the south of Laos is a place where doing absolutely nothing and chilling all day in a hammock is the main reason for visiting! The relaxed island vibe, riverside hangouts and some of the best sunsets in Laos make it easy to spend your time on the balcony taking in the views but even though it’s nice to do nothing, there’s also another must-do activity to try whilst visiting Si Phan Don. Being surrounded by the Mekong River means that, as well as spending time over the water, there’s also opportunities to spend time on it and a popular way to explore is by joining a kayaking tour! Jumping into a kayak and paddling down the river will allow you to see the lifeblood of South East Asia from a perspective like no other. Curving waterways, extraordinary waterfalls and even the chance to glimpse rare dolphins; this is a tour that’ll make you glad you got out your hammock!

One of the best and most reputable companies running this tour is Green Paradise Travel. Established over the entirety of Laos, Green Paradise offers all kinds of tours – from adventurous explorations to cultural experiences. They’re highly professional and use knowledgable local guides to give visitors the best possible insight into life in Laos. We signed up for Green Paradise’s full day kayaking tour whilst staying on Don Det and here’s what we got up to!

The Start of Our Kayaking Adventure

Our day began with a breakfast of yummy scrambled eggs and Laotian baguettes – Laos has some of the best bread in South East Asia and this is the perfect way to start a day of exploring the Mekong! As we ate, our guides briefed us on what we would be getting up to and where we’d be going that day. After everyone had finished breakfast, we donned our life jackets and jumped into the kayaks. It was two in each kayak and once everyone was ready, we set off downstream. We paddled our way through tufts of grass and sandbanks, passing water buffalo munching their breakfast (no baguettes, but we’ve heard the river weed in these parts is also pretty good!), with their young beside them cooling off in the shallows. We started to see just how unique The 4000 Islands really are as we meandered along the river, weaving around the hundreds of tiny islets that are scattered across this part of the Mekong. We spent a fun 45 minutes winding our way along the currents and taking in the views.

Soon we reached land and dropped off our kayaks on the riverbank. From there we wandered along dry, dusty paths and through the trees until we reached a wooden bridge over some fast-flowing falls. Whilst the bridge seemed a little unstable, it was much more solid than it looked! We crossed over two at a time whilst admiring the rushing white-water below us. Shortly after crossing the bridge, we made it to Som Pha Mit Waterfall – the first highlight of our kayaking adventure. It’s named after the lost image of Buddha (Pha) which was accidentally dropped into the rushing water by the king of Laos as he was navigating the falls by boat. The waterfall is more commonly known to tourists as Li Phi Falls, which translates as ghost or spirit falls – a reference to what could happen if someone slipped into the water here! We decided to stay on the banks and find out about the bamboo structures built over the water, which turned out to be local fishing traps. After taking in the views, we were on the move again. On this path we found ourselves wading through the river (which was nice to cool our feet down) and through a forest. Eventually, we made it to a beach and to our relief, a swimming spot! In seconds, everyone was in their swimwear and wading into the sandy water for a much needed cool down from the heat of the day, while local children dived nearby to collect river weed from the bottom.

Once we’d washed off all the sweat and were feeling thoroughly refreshed, we hopped back into the kayaks. Our guides told us the next kayaking route would take roughly 40 mins…if all went to plan…which meant that they were expecting a few capsizes!  Next thing we knew, we were paddling down some mini rapids and as the guides had predicted, one kayak got taken by the current and stuck on a particularly shallow rock, overturning the boat and emptying it of its passengers and their dry bags! Luckily, the river is extremely shallow and it was easy for them to right themselves, grab their bags and carry on downstream! We continued kayaking along the twisting waterways on a magical journey – a kayak is for sure the best way to explore the small streams and it felt like we were the only people to have paddled down this part of the Mekong – well except for the local children splashing in the water shouting “Sabaidee”!

Are we in Cambodia or Laos? – Searching for Irrawaddy Dolphins

After an exciting journey down the rapids and narrow tributaries, we moored up again as the stream opened up into a wider river, which we later learned, marks the boundary between Cambodia and Laos. Here we jumped onto a motorised boat (giving our arms a rest), which took us out into the middle of the Mekong. As we cruised downriver, we wondered whether we were in still in Laos or if we had crossed the border into Cambodia, to which the guides replied: “it’s undefined territory”! As we continued in both countries (or neither!), we passed fishermen, forests and bent over trees growing from the water with their roots jutting up from the surface. This is a sign that in the monsoon season, the water level rises much higher than in the dry season. As we admired the views, the boat made its way towards the lunch spot where there was the possibility of seeing the rare Irrawaddy Dolphins! As we pulled up to a little island, we could see the dolphins in the distance. Incredibly and unexpectedly, they were chilling out in the currents the entire time we were there. Out of the 92 left in the wild, there are only 3 Irrawaddy Dolphins in this area. We were lucky enough to spot their dorsal fins breaking the surface every now and again while eating our lunch of fruit, fried rice and barbecued veggie and chicken skewers. After lunch, we sat in the shallows beside the boat and continued to watch to dolphins calmly swimming through the fast-flowing water in the middle of the river. Too soon, it was time to leave, but not before the guides took the boat into the current so we could get a closer look at these wonderful dolphins – it was incredible to see such a rare and endangered species so close! We definitely could have stayed there for many more hours watching them glide through the water but it was time to head back upstream. Along the way we passed more fishermen throwing out their nets and diving to collect them back up – thankfully though, they don’t go near the area where the dolphins are often sighted.

We eventually made it back to the river bank. Due to the intense heat of the day, we skipped the next kayaking section along the open river and instead, got in the back of the van with our vessels tied to the top and drove towards our next stop: the biggest waterfall in South East Asia – Khone Phapheng. The Falls were truly impressive – the water cascades over the falls in a white water wall and is the reason why the Mekong can’t be fully navigated by boat. It was amazing to stand in front of and take in the sheer volume of it all. After admiring Khone Phapheng, we were driven back to Nakasong village, where we got into the kayaks for the final time. We were super tired by this point and our arms were almost giving up, but we could see Don Det in the distance, all we had to do was get there! We were on the home straight and with one last push, we paddled across the wide river, the island getting closer with every stroke. Mooring up on the jetty where we’d began that morning signalled the end of our kayaking adventure along the Mekong River!

Kayaking Adventure Tour – Worth Getting Out The Hammock For?!

Although chilling in a hammock over the river is a wonderful way to spend the day, this tour is a must-do whilst visiting The 4000 Islands and Don Det. There is no better way to explore the Mekong than from a kayak as it allows you to paddle right down the hidden waterways and see the local life up close.  Seeing the dolphins was a major highlight of the day, especially getting to see them so close and so frequently – we couldn’t believe our luck! Having just this opportunity alone would have made the tour worthwhile, except that we also got to see some incredible waterfalls and meet some brilliant people as well! We loved every second of this kayaking adventure and we would 100% do it again if we got the chance! Ready to jump out the hammock? Book your Kayaking Adventure here!

Full-Day Kayaking Tour with Green Paradise Tour and Travel – All You Need to Know!

Interested in paddling down the Mekong River in The 4000 Islands? Then here’s all you need to know about this tour! This is a full-day adventure with local tour agency Green Paradise Tour and Travel. They have an office and restaurant on Don Det island and this is where the tour begins.  In 2 person kayaks, you’ll be paddling down the Mekong, wandering through the forest, swimming in the river, admiring some breathtaking waterfalls and there’s even the chance to catch a glimpse of the endangered Irrawaddy Dolphin!

We recommend you bring:

Ready for an unforgettable Kayaking Adventure in 4000 Islands? Book Here!

Be the first on the plane when travel opens up. 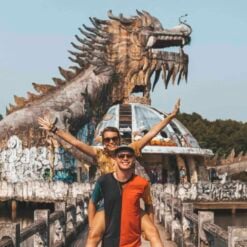 Will and Ellie are the UK travel bloggers behind Tapp and Bear Travel. Originally from Devon and The Cotswolds, they both graduated from Falmouth University with degrees in Marine and Natural History Photography and set off on the adventure of a lifetime! They are currently writing for South East Asia Backpacker reviewing trips and tours all over the continent. Interested in becoming a writer for us?