When you get woken up at 4 am to the call of prayer, it is immediately evident that you are in a new land. Flying halfway across the globe, the traditions and cultures here are so far removed from what your daily life is used to. But whatever the noise was at that time, it didn’t matter, you are in Northern Sumatra, land of well-known perfect waves and incredible sea and wildlife.

But there’s a kicker: you are in a small town called Lhok Nga, 15km from Banda Aceh, a relatively less travelled and surfed area of Indonesia, and they don’t sell beer.

Is surfing without an ice-cold beer afterwards even possible?

“You can’t buy beer here. In fact, you can’t drink any alcohol here, period. Alcohol is illegal.” This is what this travelling surfer from Wales is telling me while my first surf session in over 6 months is draining me. My mouth is watering, and my taste buds are craving an ice-cold beer from a new country that took hours of travel and sleepless nights to get to. Absolute disbelief and shock! Was I exhausted from the flight and the surf session? Was I just delirious? Or was he really telling me the truth and you can’t buy a beer here?

The guy continued by also saying that about six years ago, a local tried to bring in 12 cases of beer on the back of a truck. He got caught and was sentenced to eight years in prison for it. So while this guy is telling me this, in the back of my mind I was doing math. If he was telling the truth and that actually happened, the guy is still in prison for it.

I have never been to a surf destination, anywhere in the world, where you couldn’t come in from a multi-hour surf and go to a store, bar, hostel, or restaurant and not be able to buy a beer. Let alone have to face prison time if you bought a bootlegged beer from someone. That was half the joy of going to a surf destination!

Yes, that’s right, I said half. Yes, the surf is the primary reason we travel anywhere. Or at least the average human that reads these types of articles does. But we all talk after a great surf trip about how good the surf was, but also the camaraderie and the stories you hear from others while you were there. And how else do those stories get told without beer? We pride ourselves on saving up for that trip and the dream of cheap stay, perfect surf, and cold beer.

Relaxing of the alcohol laws

It turned out that over the years, the place has gotten a little less strict about their alcohol restrictions. During Ramadan however, (the area is very Muslim) it is strictly forbidden and heavily policed.

Some places in town sold beer, but you had to ask the manager and he or she had to go to the back refrigerator and get it for you. Nothing was advertised to sell it. So it turned out, I met an Aussie guy at a store and he told me where to buy beer in our area. For an outrageous price, but you can buy beer.

So needless to say, after a long surf, I went and got myself one beer every day. One beer for the price of three, but it sure tasted good and well deserved after an all-day affair in the ocean. But enough about my spout of alcoholism and my absolute love for beer… Northern Sumatra fires!

Finding the perfect place to surf in January in Southeast Asia

It was January. I was living in China and I was 6 months out of surfing due to the inland city I live in. I was dying. I needed surf so bad. It was freezing in China and the only thought on my mind was of a warm tropical paradise.

I was trying to figure out where to go and nothing was working. Taiwan was a thought, but due to the relations between China and Taiwan, the airfare was ridiculous.

The Philippines came to mind but after the recent devastation that struck it (this was just after Typhoon Haiyan), I would feel guilty if I didn’t aid in some way other than photographing the local surfers.

But then a friend of mine told me about Lhoknga Beach in Northern Sumatra. I started laughing when he told me because I thought there was no way that Indo could have surf in January when its prime surf season is April through October. But it turned out that December through April is the best time to go to this area for the winds during that time are primarily offshore. The waves never really get above head high but to the average surfer that isn’t trying to aspire to be Shane Dorian, would love it. And I absolutely did.

Where to Stay & Surf in Lhoknga, Northern Sumatra

I met a local pro there by the name of Yudi, and he has a little place in Lhoknga (called Yudi’s Place) that I ended up staying at during my time there. The guy kills it. There wasn’t anybody else in the water that tucked into as many barrels that he did. Nobody came even close. Of course being a local, he knows the waves in the area like the back of his hand. But for a guy that is easily 6’, he can shrink down and fit into shoulder high barrels.

There were three waves in the area that were all within walking distance of each other, as well as from his guest house. One was a left. When it is low tide and there is a bit of swell in the water, this wave goes bonkers. 100-metre long barrels are standard.

The second is a mental but shifty peak. The right-hander off of it is crazy fun because it’s not perfect. You would drop in on a wave and just see the barrel section coming at you almost like a side wave. And the left off of it is a perfect little drainer, which is almost a guaranteed in and out. You can call a barrel before you even drop in. Where the right-hander, you’ll have no idea what it’s going to throw at you until you drop in. And the third is a right-hander. More of a rip-able wave out of the three, but super fun nonetheless.

There is one other wave in the area. From what Yudi told me, and a couple expats that call this area of Indo home, it is the only six-star wave in Indonesia. “Are there six-star waves elsewhere in the world, let alone Indonesia?”

I don’t know but I saw the reef on a flat day and you can tell if there were the right swell, this place would be on every section of an Indonesian boat trip from any sponsored surf team.

However, it apparently only breaks a couple times a year and when it does the winds usually screw everything up. But needless to say, there wasn’t anything wrong with mind surfing the place and staring at the charts praying that something of size was shaping down by Antarctica.

Though that swell never came in the 10 days I was there, I still had plenty of waves and got decent photos. I actually only surfed when Yudi and the local kids went in. It was just always fun. Nothing big or scary, just perfect, offshore, shoulder to head high barrels with only a handful of guys out.

What more do you need? And at the end of the day, we would all relocate to where they sold bootlegged beer (the local beer is Bintang) and just sit there and reminisce about the day’s waves over an ice-cold illegal beer and a surf film. With a pretty international crew of surfers, which made for excellent conversation and past lies about surf trips that took place previously.

Morning shoot, a couple cups of coffee from the poop of a local cat, French toast with peanut butter that you would eat with your hands, a mid-morning surf, siesta, mid-afternoon surf, sunset photo shoot, a walk to the local restaurant that served epic deep-fried heaven with superb fruit drinks, and a pit stop on the way home where the bootlegged beers were bootlegged and the stories were shared.

If this wasn’t a ten-day surf rejuvenation, I don’t know what else could have been better. Maybe the six-star wave could have shown its face, but even with that, getting barreled in head high waves is more than enough for me. I was complaining in the beginning about the lack of beer consumption that was going to take place since this is my holiday, but it was great to have a bit of a detox.

Instead of leaving the place with a wallet emptier due to beer purchases, I left Indonesia with a great group of friends from all over and memories of perfect peeling lips being thrown over me. I did not, however, leave Indonesia with a hangover.

Sean grew up in Coastal Southern California where his passion for surfing, photography, and the love of nature began. After high school, he migrated to Northern California for University where he studied Geography and Photography. While in college, he took time off to travel and began a neverending quest to see as much of the world as possible. 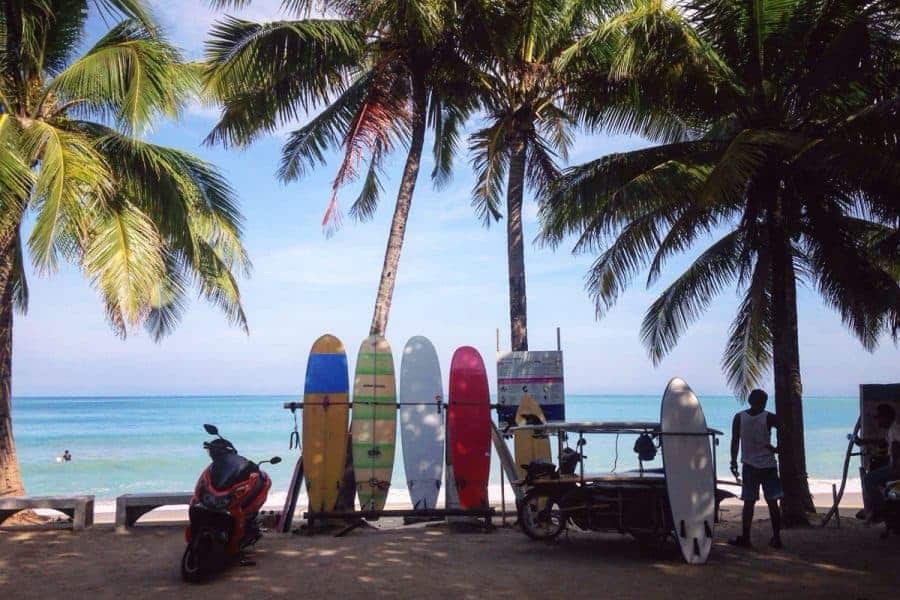