Skip to content
Relief work and international aid continues to pour into the Philippines as the country continues with its recovery from the strongest typhoon ever recorded on the planet. Typhoon Haiyan hit the Philippines on 2nd November 2013. With wind gusts that hit up to 270 km per hour at its peak, parts of the low-lying islands were ‘completely flattened, and many hundreds of thousands of people are now homeless’, according to a recent BBC News report. 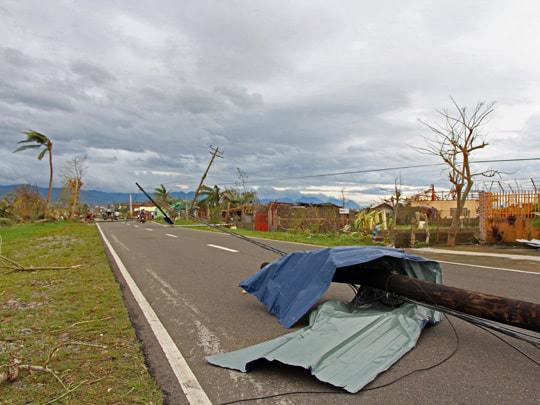 The island hit the hardest was Leyte, in the Eastern Visayas region (central part) of the country. A Relief Aid report confirms that its capital, Tacloban, with a population of over 220,000, has been devastated; most houses destroyed: ‘In total, 670,000 are said to have been displaced – about 55% of them are living in evacuation centres.’ In his article for the Guardian, December 3rd, photojournalist Bullit Marquez, who flew into Tacloban with the Philippine airforce on the actual day that Haiyan hit, writes, ‘Everything was levelled to the ground. And there were more bodies among the debris and floating in the water between cars… Since then, many days have passed with people trying to pick up the pieces, living among the debris and in the rain with no food and water, as dead bodies lie unclaimed. The repercussions are still sinking in. 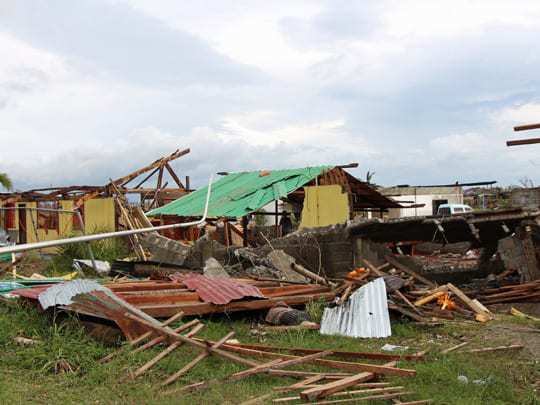 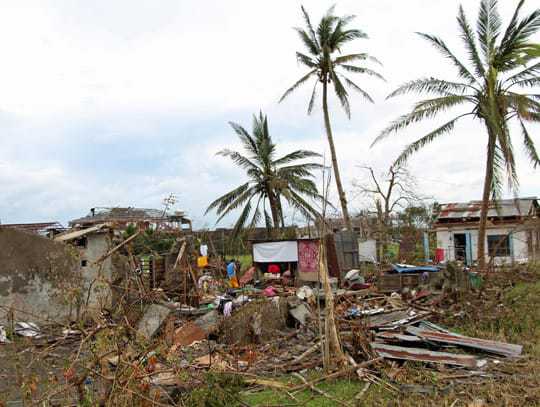 In her report on 27th November, UK Development Secretary Justine Greening said of the resulting impact of Haiyan: ‘As of today, the UN reports that more than 14 million people have been affected, with 3.5 million displaced. The official death toll stands at 5,500.’ I was in Siem Reap, Cambodia, as the disaster unfolded. Sat next to me at breakfast one morning was Dutch-born Annaly Liauw, whose Filipino family live in nearby Bohol. Bohol was also one of the islands hit by Haiyan, but Annaly’s family were luckily unharmed. However, amongst the horror stories they heard unfolding just 120km away in Leyte was that of a woman who reportedly tried giving away her baby away to a stranger. Annaly told me, “She kept crying, ‘look after him, and take him somewhere safe, please! She didn’t think she could handle it – but both she and her baby survived, remained together, and are now said to be ‘doing ok.’” The Philippines is a stunning archipelago of 7,107 islands with amazing beaches, diverse landscapes and most of all, extremely welcoming people. We would encourage anyone to visit this fabulous country (and sing a bit of karaoke!) and experience the beauty for themselves. For inspiration about your backpacking trip in the Philippines, check out our article – Top 10 Things To Do in the Philippines! 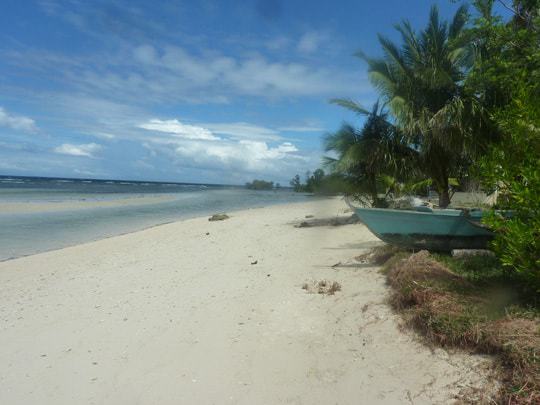 The gorgeous unspoilt beaches of the Visayas islands.

Were you witness to Typhoon Haiyan?

“I was camping in central Vietnam when Haiyan hit. I was lucky it changed course from its original predicted route as it passed over the Philippines; if it hadn’t, it would have raged straight over me. When I got back to Hoi An the day after it was supposed to land there, everywhere was closed; signs had been taken down and roped up, cash machines shrink-wrapped and sealed (I’m assuming in case of looting had it hit); sandbags on roofs etc. The whole town was officially closed that afternoon as apparently, the power in the whole of central Vietnam was going to be cut. But, of course, Typhoon Haiyan never actually got to us. All power stayed on, and the locals just accepted it as an unexpected holiday. Seeing all the debris sweeping in from the Philippines that day really did hit home, though. Not long after that, I left for Indonesia – but on the 10th December, I changed my plans and headed off to do a volunteer work in Malapascua to work with the Rebuild Malapascua Organisation.” Joe Astell (Backpacker, UK) “In October 2012, I was witness to how a typhoon can slam into the coast, create giant waves and carry off a person like a plastic bag into the wind in just a matter of seconds. Typhoon Santi arrived to wreak havoc in Aurora while I was living at a beach front surf resort. We had to be rescued out of there. Typhoon Santi had but a fraction of the power of Haiyan. Super Typhoon Haiyan (known as Yolanda in the Philippines) had one of the highest wind speeds ever recorded in a storm in world history. It was also the fourth typhoon to hit the country this year. At the time of writing (November 14th, 2013, 6am), Haiyan has left more than 2,357 dead, 3,853 injured, 77 missing with a total of 359,574 persons in 1,099 evacuation centers. If you’re reading this right now, you must be feeling as helpless as I am. Thousands more are starving and there have been reports of looting and crime. It’s taking time for aid to arrive and the victims have no other choice but to try and survive – any way they can.” Lois Yasay (Travel Blogger, Philippines) 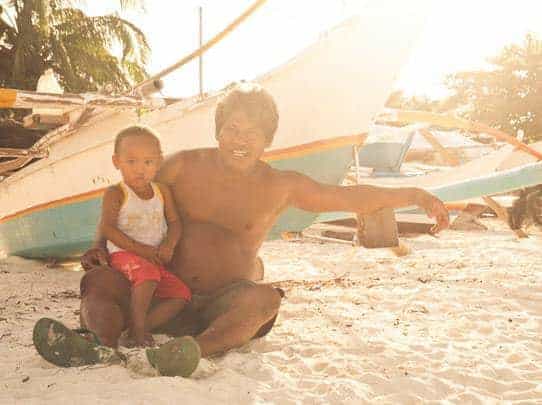 The incredibly friendly people of the Philippines is a major draw for backpackers!

How Can You Help?

On her website, We Are Sole Sisters, Filipino native (originally from Davao, Mindanao) Lois Yasay names five ways in which we can help Philippines and alleviate the people’s suffering in the aftermath of one of South East Asia’s worst natural disasters. You can read more about how you can help with worthwhile organisations on the Sole Sisters Website. DONATE: VOLUNTEER: KEEP TRAVELLING! 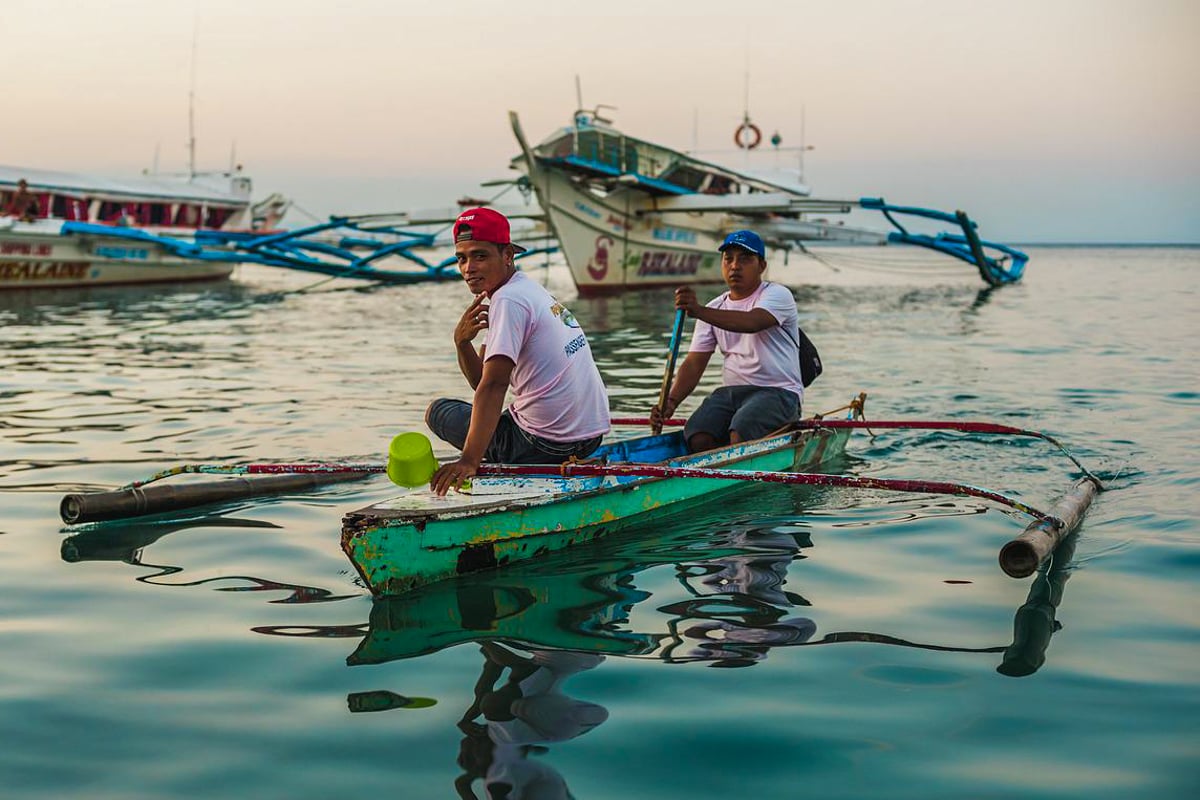 5 thoughts on “The Aftermath of Typhoon Haiyan, The Philippines – How Can You Help?”