Please note: This article was published in 2013 and discusses the protests happening at that time. For up to date news sources, please see this article instead.

Flying into Bangkok as your first destination on your backpacking adventure? Are you worried about the political protests affecting your trip? S.E.A Backpacker Ambassadors, Charla Hughes and Chase Berenson are two travellers turned expats who are now living in Bangkok and have given us a lowdown on the current situation from their point of view, major rally sites to avoid and tips for travellers on how to stay safe in the city! 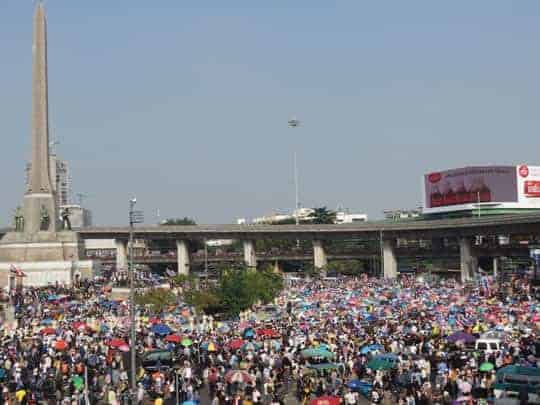 Despite the BBC recently declaring a 60-day state of emergency from Wednesday onwards, Bangkok is still predominantly safe for backpackers who are passing through.  There are some hotspots, but they’re easy to avoid; you can visit the city now and still have a good time!

In the past week, during the “Bangkok Shutdown”, the majority of the action has been taking place around the neighborhoods of Sala Daeng, Siam, and Victory Monument.  Sala Daeng is well-known among backpackers as being the home of Patpong, an all-night market and bar scene; it’s also a major business district. During the daytime it’s relatively safe, but it’s not a place to go unless you must.

The shopping malls around Siam Square (such as Siam Paragon and MBK) are reopening and attempting business as usual.  They’ve seen a huge slowdown in profits, and they are actually offering huge discounts in an attempt to lure shoppers back. If you go, avoid the street level crowds, and just exit directly from the SkyTrain into the shopping malls.

Remember that as a foreigner, being amongst the protests and being seen to get involved can be grounds for deportation from the country. Getting too close to the action and taking photographs is not a good idea.

Another major area for the protests, Victory Monument is one of Bangkok’s major intersections, and it is where the vast majority of Bangkok’s minibuses depart for nearby destinations such as Hua Hin, Koh Samet, and Kanchanaburi.  With protests having shut down traffic in that area, now is a great time to try one of the government buses departing from Mo Chit, Sai Tai, or Ekkamai bus stations throughout the city.

Since the protests started in October of 2013, Democracy Monument has been the central gathering point.  In the past week, the protesters have mostly departed from the monument to occupy the other staging areas, which means the area around Democracy is a lot quieter than it has been in the recent past. Khao San Road, the major backpacker hub is in easy walking distance, so for travellers heading to that world-famous street, you should be in position to enjoy the crazy street-life of that area again.

Above all, wherever you are in Bangkok, always stay aware of your surroundings. The situation can change fast and it is good to keep up to date via local news websites and Twitter.

Tips to Stay Out of Trouble

After six years of cold weather, Chase moved from Alaska to Bangkok to work and explore SE Asia. Along with his fiancé, Charla, he has completed some epic travel adventures like driving a car from London to Mongolia in the Mongol Rally! Chase is currently taking a break from travel living in the US and saving up for his next trip!